On its 15th anniversary, Zeahaa Rehman pays respects to the contentious album that shaped much of her youth. 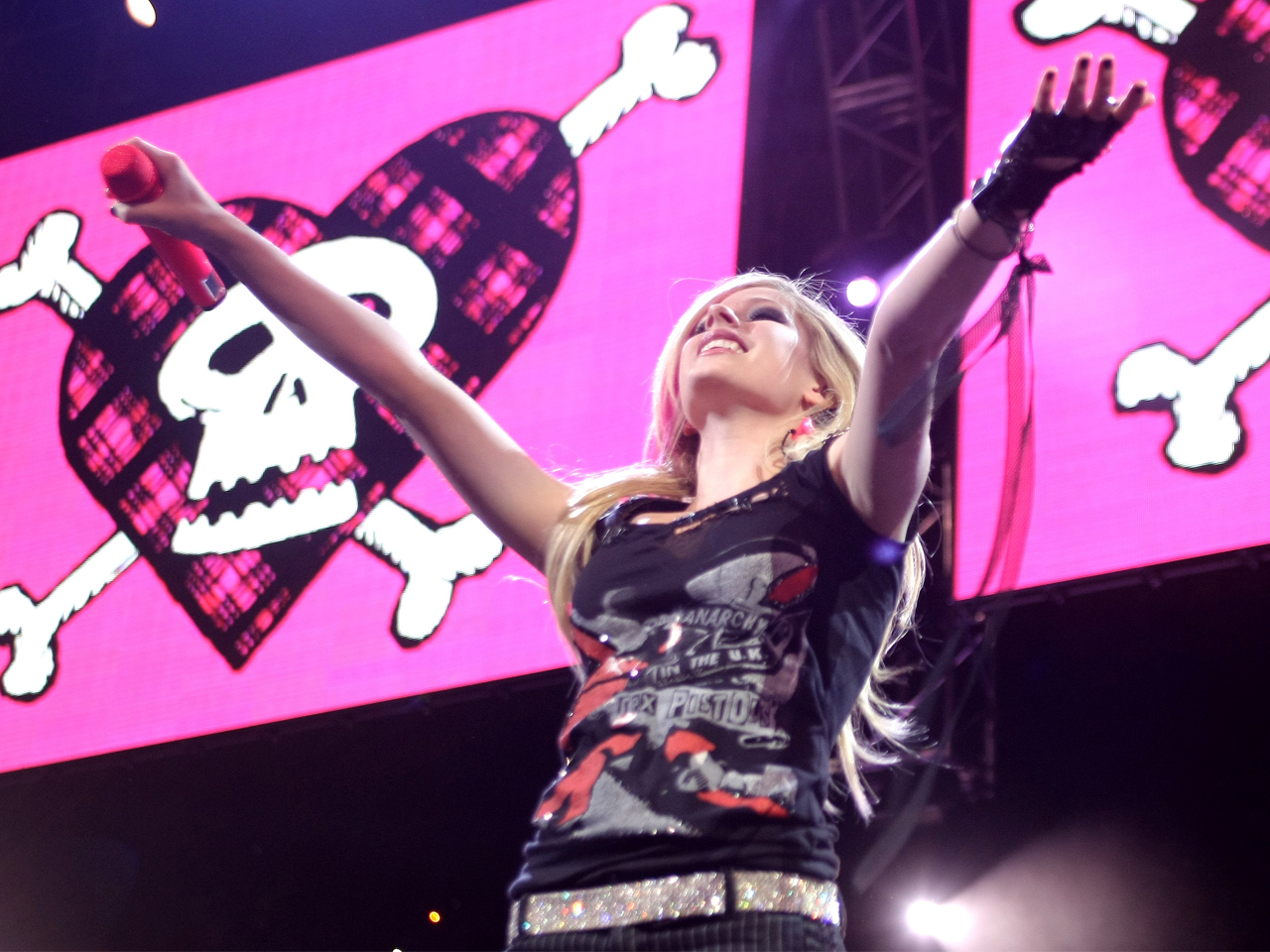 “Hey, hey, you, you, I don’t like your girlfriend,” were the first words I ever heard Avril Lavigne sing.

I was in my school’s computer lab with the rest of my grade 6 class when one of my friends put on Avril Lavigne’s “Girlfriend.” The song, which serves as lead single for Lavigne’s third album, The Best Damn Thing, and its rather hilarious video—at least to my ten-year-old self—had been released a year earlier. But as was the case with most American pop culture phenomenons before broadband internet became widely available, it had arrived to Pakistan a year late.

Though I enjoyed the song, I had no way of discovering more of Avril Lavigne’s music (or that of other English singers) so I returned to my usual musical diet of Pakistani pop and Bollywood soundtracks. But when I immigrated from Pakistan to Canada a year later, I wanted a way to connect with both my friends back home and my Canadian peers. Lavigne was one of the few English singers I knew of.

Avril Lavigne doesn’t need much introduction to a Canadian audience. She’s a singer-songwriter who rose to stardom with her breakout hit “Complicated” in 2002, making it 20-years-old this March. She went on to release seven studio albums (the last of which was released this February), win 10 Juno awards while being nominated for 36, and remains one of the best-selling Canadian artists of all-time.

I couldn’t pirate Lavigne’s music through LimeWire because there was only one ethernet connection in our Mississauga apartment reserved for my parents’ laptop. I didn’t own a USB stick at the time, so I had to resort to requesting holds on her CDs at my local library.

Out of all of Lavigne’s CDs I had requested holds on, The Best Damn Thing was the first to arrive. I have a vivid memory of bringing the CD home, burning it onto my computer and typing the lyrics from its liner notes onto WordPad documents on my computer—which I inexplicably still have on my hard drive and which carbon date this memory to September 2009—before listening to the album for the first time. The visualizations on the Windows Media Player mirrored my brain activity while listening to the album.

The Best Damn Thing (TBDT) is Lavigne’s third studio album. It was released fifteen years ago on April 11th, 2007 and was certified platinum twice both in Canada and the U.S. It became one of the best-selling albums of 2007. Its lead single, “Girlfriend,” became one of the fastest music videos on YouTube to reach a hundred million views and peaked at number 1 on the Billboard Hot 100—Lavigne’s only single to do so. (In today’s terms, “Girlfriend” would have been trending both on YouTube and Twitter’s Explore page for at least a week.)

Despite its success, the album was met with mixed reactions from critics and a large portion of Lavigne’s audience, many of whom expressed a preference for Lavigne’s earlier sound.

Lavigne’s debut single, “Complicated,” was an alternative-rock song whose lyrics lamented a friend trying to be cool instead of being themselves. The song was an apt foreshadowing of the sonic brand Lavigne established through her first two albums, Let Go (2002) and Under My Skin (2004): simple yet vulnerable lyrics over guitars and drums to produce a sound that straddled the alternative rock, punk-rock and post-grunge genres. The Best Damn Thing, however, apparently marked a departure from this sound. Though the album’s sound still leaned towards rock, it was more pop-rock than punk. The lyrics paired with it were, in Lavigne’s own words, “fast, fun, young, bratty, aggressive, confident, cocky in a playful way” where before they had been melancholic and angry. And rather than sporting her signature skater girl look—which often consisted of wearing ties with tank tops—Lavigne opted for plaid miniskirts, fishnet stockings, thigh-high socks and hot pink streaks in her platinum blonde hair, as if channeling a teen girl’s version of the punk rock aesthetic. Fans speculated whether Lavigne had been replaced by a doppelgänger (she had not).

Listeners often tend to deride The Best Damn Thing in favour of Lavigne’s first two albums because of the album’s poppier sound and girlier look. But, as someone who listened to all three of Lavigne’s albums in quick succession and found an equal amount of comfort and joy from each in different ways, I think the reception The Best Damn Thing received is a bit unfair.

For starters, it is incredibly cohesive, both sonically and lyrically. The album, over the course of 12 songs—including two bonus tracks—charts the course of a relationship which begins with a crush, goes through its ups and downs, and eventually ends with a breakup.

Most of the derision TBDT earns likely stems from the songs’ lyrics. But I think this is unwarranted because critics didn’t understand who this album was aimed for—teen girls like me who were Going Through It—and that Lavigne’s simple, sometimes even silly lyrics were exactly what they wanted.

Being a teenage girl is hard. It was doubly harder for me because I had to experience puberty alongside the anguish and feelings of isolation that stems from leaving everything you knew behind to assimilate into a new language and culture. Lavigne’s straightforward lyrics on TBDT helped me get through this by capturing the dizzying range of emotions and impulses that many teenage girls felt regularly like love, lust, and rebelliousness intertwined with rage and frustration.

“Contagious” guided me through the giddiness over my latest crushes; “Hot” helped me understand the stirrings of lust they evoked in me; and “Girlfriend” helped me voice the things that I couldn’t find the courage to say to them in real life. “The Best Damn Thing” boosted my self-esteem whenever I see-sawed between confidence and crushing doubt. “Runaway” comforted me when nothing seemed to go my way, and “Innocence” amplified the joy I felt when they did. Not only did Lavigne’s lyrics help me understand my emotions, but their simplicity also encouraged me to write poetry (much of which resembled her lyrics) to work through them.

TBDT isn’t perfect though: several of the album’s songs exude Not-Like-Other-Girls energy. On “Girlfriend,” Lavigne repeatedly tells a man that she doesn’t like his girlfriend because “she’s, like, so whatever”; on “One of Those Girls,” she accuses a girl of being a gold-digger and slut-shames her by warning her boyfriend that “before you know it, she’ll be gone/on to the next one”; on “Everything Back But You,” she calls the woman she suspects her boyfriend of cheating on her with a “bitch, slut, psychobabe.” This brand of internalized misogyny was common at the time in both the cultural landscape and the popular music that reverberated across it (*cough* Misery Business *cough*) from which it seeped into teenage girls, including me. But where Paramore’s front-woman Hayley Williams decided to retire “Misery Business” as the culture shifted to unlearning internalized misogyny instead of encouraging it, Lavigne hasn’t ever addressed these lyrics.

TBDT likely resonated with teenage girls so much while we were figuring ourselves out because Lavigne was doing the same. She was only 18 when she released her debut album, and 23 when TBDT came out. As I understand it, TBDT wasn’t proof of Lavigne “selling out” and pandering to a broader audience, but instead demonstrated Lavigne venturing outside of her musical and fashion comfort zone as she grew up.

Music made by female musicians and/or musicians whose audience predominantly consists of (young) women is often not regarded as “real” music. When these musicians branch out—especially into pop, already perceived as a frivolous and feminine genre—their efforts to reinvent themselves are written off as attempts to be commercially successful rather than a natural desire for a musician. I think the same happened to Lavigne. She was accused of being a sellout when she just attempted to reinvent herself, and rather successfully, too.

The pop-rock sound that Lavigne demonstrated on TBDT cemented her status as pop-punk queen, inspired Lavigne’s peers including popular teen icons Hilary Duff, Ashlee Simpson and Lindsay Lohan, and became the blueprint for many Disney alums. Miley Cyrus’ Breakout (2008), Demi Lovato’s Don’t Forget (2008), Selena Gomez & The Scene’s Kiss & Tell (2009) all have a pop-punk sound that can be traced back to Lavigne. Hints of Lavigne’s musical DNA can still be found not only in Willow Smith’s music—who collaborated with Lavigne for “Grow”—and Olivia Rodrigo’s Sour but also indie-rock artists like Snail Mail and Soccer Mommy.

Though some of TBDT’s lyrics admittedly now make me uncomfortable, they also serve as a reminder of how much I’ve grown since then. They also don’t negate the immense impact Lavigne and this album had on not just me and the larger musical landscape, but on an entire generation of teen girls who needed to hear that it was okay to be “a scene, a drama queen.”

For many years after stepping off the proverbial boat from Pakistan, I constantly worried about not matching up to my Canadian peers—in everything from clothes to ‘coolness’—but Lavigne convinced me to embrace my differences. The album came to me at a time where I needed to hear that my identity and emotions, be they awkwardness, angst, or anger, were valid. Whenever remnants of that insecurity resurface (often while scrolling through any social media platform) sometimes the best way to smother them is to let Lavigne play. Even after all these years, the album evokes the same feelings of joy and comfort I felt the first time I heard it as that anxious 11-year-old searching for a way to belong.