What we learned from a profile in Self magazine—a surprisingly revealing window into her private life. 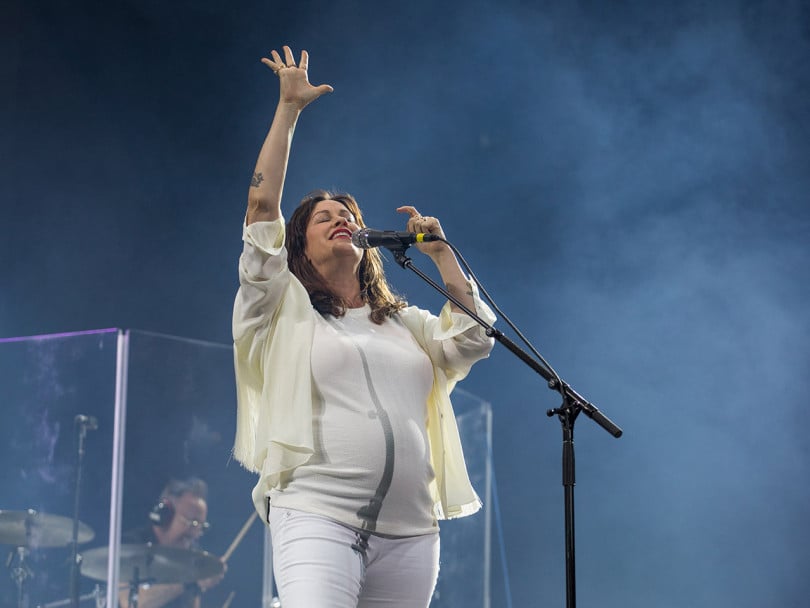 Most mega-famous people submit themselves to the invasive experience of a celebrity profile only when they have a project to promote. But in an intimate and extremely lengthy new feature in Self, Alanis Morissette doesn’t seem to be promoting anything other than her pregnancy (she’s 45 and due this summer) and her overall awesomeness. Here, everything we learned including her experiences with post-partum depression, her evolved approach to parenting and how she’s not shy of poop jokes.

She never dreamed she’d be pregnant with baby #3

There were, as she puts it, a “few false starts” between her first child, son Ever Imre Morissette-Treadway (now eight) and her daughter Onyx Solace Morissette-Treadway (three). Dad is the American rapper Mario “Souleye” Treadway—more on him later. Miscarrying (an experience she describes as “a torturous learning and loss-filled and persevering process”) motivated Morissette to become an expert on her own body—the kind of patient who brings a thick personal file to every new medical appointment. And she believes this research- and information-based approach, which included blood testing, trauma recovery, midwifes, surgeries (and, of course, luck and means), is what eventually resulted in her pregnancy.

Her first two births weren’t all that easy

Early on in the profile, Self writer Nicole Cliffe establishes that both writer and subject are “true birth-story fan[s]”. (If you are not interested in birth—the overarching emotional experience and/or the more granular bodily details—this may not be the story for you). Morissette talks about how birthing Ever was a 36-hour ordeal (with 12 hours of intensity):

“Oh, yeah, when you’re fully in the shit,” says Cliffe.

She goes on to explain how, when she was late with her second child Onyx, she tried the castor oil method, meaning she drank castor oil in the hopes the violent, full-body-flush reaction would push out the baby. Which is 100 percent not scientifically proven and probably 100 percent an old wives’ tale, but apparently it “did the trick.”

She was her own doula

Other examples of her New Agey-ness include referring to her kids as empaths and the fact that she served as her own doula. For the record, the actual doula was late, which is what caused Morissette to “[become] the coach.” (If you are a pregnant woman and not currently fantasizing about having Alanis Morissette guide you through your contractions, what is wrong with you?)

After the birth of her first child, she experienced post-partum depression (which she likens to being “covered in tar”), but thought she could push past it by getting out on tour, which is how she had handled previous, non-PPD depression bouts. It took her a year and four months to final get proper medical attention. And with her daughter, she waited four months. In advance of birth #3, she has learned an important lesson: “Not singularly relying on myself to diagnose myself is key.”

She and her hubby practice a progressive, democratic style of parenting

There’s a lot of negotiating. Describing her approach to parenting she explains: “Our whole philosophy is win-win or there’s no deal. Or it’s win-win or we’re not done. Souleye, Onyx, Ever, and I—all four of us win. And that takes a minute.” A minute and a reserve of patience that most mortal moms and dads can only dream of, but pretty on-brand for the woman who played god.

She goes on three-hour walks with her kids

Sigh. Are you feeling not worthy yet?

She and Souleye have a gender equal marriage (a real one)

A lot of women think their relationships are pretty egalitarian, but still end up doing an ungodly percentage of the emotional and domestic labour. Not Alanis. “He’s an incredibly modern man, so he has never had an issue with being married to an alpha woman, God bless him,” she says of Souleye (which is what she calls him). She explains they practice “provisioning” a word that is (says Cliffe) designed to strip away gender-based ideas of what it means to provide and basically just means being in tune enough with your partner that you can anticipate and meet his or her needs.

Sure (as Cliffe points out), the lyrics for the first single off 2002’s Under Rug Swept read like a “master class on grooming a minor”, but a lot of people failed to understand that while grooving to the insanely catchy chorus. That’s totally cool, says Morissette: “I’m aware [that] some people listen to music as a relationship, as a conversation, as a dialogue. And then other people listen to music as a way of escape or rest or entertainment. And I’ve never been opposed to either version.”

But that is what it’s about

Says Alanis: “I was just talking about ‘Hands Clean’ yesterday and how some people know what that song’s about and other people just don’t know? Just singing along and I’m like…that’s the story of rape, basically.”

Her early #metoo anthem didn’t go over so well

Speaking to the reception to “Hands Clean,” she says “It—and I—were just straight-up ignored at best. Vilified and shamed and victimized and victim-attacked at worst. There were moments where around the #MeToo era where people would say, Why are people waiting so long to speak up? And I was like really? But then also I lovingly reminded a couple of them oh, but you do remember me saying something 15 years ago, right? Word for word about this and do you remember what happened during that time?”

Okay, so she does mention one new project (in the last paragraph, at the end of more than 7,000 words). The jukebox musical is coming to Broadway in November and has Morissette looking back on the album that made her famous: “I’m just like how is this possible that something I wrote when I was 19, I can still stand behind it now?”