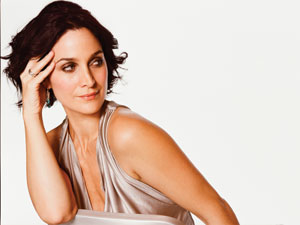 The baby in the corner is driving Carrie-Anne Moss to distraction. Dressed casually in jeans and a thin grey sweater, the 40-year-old actress keeps glancing across the cafe’s back patio, squinting her pale blue eyes for a better look. He is bundled up despite the warmth of the Santa Monica morning; his mother fusses over him while her friend rocks the stroller and coos. Moss is cooing, too. “That baby’s just killing me,” she says more than once, shaking her head.

When the women get up to leave, Moss leans forward and calls to them. “Your baby is gorgeous! He reminds me so much of both my boys.” The mother thanks her, then confesses her son is suffering from a little flatulence. Before long, the conversation ambles easily around the relative merits of beer (good for breast milk) and cayenne pepper (bad for gas). The trio take off and Moss sighs. “Babies are so delicious it’s ridiculous.”

Moss, born in Vancouver, first set tongues wagging as the leather-clad, ass-kicking Trinity in the phenomenon The Matrix. Nine years and two sequels later, she has settled comfortably into a softer role: wife to the Canadian actor Steven Roy and mother to two young sons, aged four and two. (Mindful of her privacy, Moss reveals few details of her marriage and has never released the names of her children to the media.) This new domesticity has spilled over into her working life, as well. Though she accepts parts less frequently, Moss appeared recently as a housewife in the Canadian comedy Fido – filmed while she was seven months pregnant – and as a mother in both the independent drama Normal and the hit thriller Disturbia.

This year, she’ll play wife to a fellow Canadian, Ryan Reynolds, in Fireflies in the Garden, an ensemble drama that stars Julia Roberts and Willem Dafoe as Reynolds’s highly dysfunctional parents. “The script really moved me and made me go hug my kids while they were sleeping and breathe all over them and never want to let them go,” she recalls with a laugh. “That’s when I knew I had to do it.”

Onscreen and off, motherhood remains at the forefront of Moss’s mind. She confesses that whenever she meets people with older children, she asks them if they wish they’d had one more. “We’ll be out for dinner and I’ll ask strangers,” she says, pantomiming her husband’s mortified expression. The response has been unanimous: Moss has yet to meet anyone who’s said no.

Actually, one person said no: her own mother. “But she’s the only one!” Moss insists. Barbara Moss had a son when she was 17, then Carrie-Anne at the age of 20. Divorced when the children were still young, she raised the pair in Vancouver largely on her own, working as a legal secretary. Moss seldom saw her father. “When I think of my childhood, I think of my mother, whereas my kids are going to be thinking of both their parents,” she says. “They have a father who is very present.”

Moss developed an early and passionate devotion to becoming an actress. She enrolled in modelling class, joined a children’s musical theatre group and wallpapered her bedroom with photos of Brooke Shields and Lauren Hutton. She and her best friend dreamed endlessly about their graduation from high school, when they’d hop into a convertible – dressed all in white – and drive down the Pacific Coast Highway toward Malibu and guaranteed fame.

Instead, Moss moved to Toronto. She began modelling professionally, working as far away as Japan before settling in Spain. While in Barcelona, she booked a TV series, Dark Justice, which relocated to Los Angeles for its second season. When the show was cancelled, the 24-year-old began to flounder. She moved home to Vancouver, but left after just a few days; she returned to L.A., but promptly broke up with her boyfriend. Moss found herself occupying the spare room of her new manager’s ex-husband’s house – don’t ask – an unusual arrangement that she maintained for more than six months.

In 1994, following a string of brief television appearances (including “Woman Driving the Jeep” in the popular series L.A. Law), she landed a role in Aaron Spelling’s new evening soap, Models Inc. It couldn’t have come at a better time. “I had no money. Zero. I had to get an apartment because I’d just broken up with a boyfriend,” Moss says sheepishly. “Somebody told Mr. Spelling, so he advanced me $10,000.”

This, she believed, was her big break; this show was going to be huge. But when Models Inc. failed to match the success of Beverly Hills 90210 or Melrose Place, it was quickly pulled off the air. Moss toiled in television for a few more years. Then, after multiple auditions, she secured the part of Trinity in The Matrix, and everything changed.

Except her financial situation – that didn’t change, at least not immediately. “I wasn’t paid much money to do The Matrix. It took a year of my life, and I lost my SAG [Screen Actors Guild] insurance because I was working out of the country [in Australia],” Moss explains. “I thought, My God, I’m going to have to wait on tables while I have this huge movie coming out. Every day I’d be like, â€˜Hhhhhh,'” she recalls, making a low, nervous noise as she clutches the table and rattles the coffee cups.

The movie made upward of US$450 million; coupled with the two sequels, it eventually grossed more than $1.6 billion. Asked about her response to such treÂ­mendous success, Moss uses the word overwhelming five times in as many sentences. After The Matrix‘s premiere in 1999, she escaped to her hotel room, where a girlfriend draped Moss in a blanket to stop her from shaking. “I really got to know myself at that time, and I feel that I became more real,” she says. “I think a lot of it has to do with being Canadian. It just feels like us Canadian girls are a little simpler.” The film’s release happened to coincide with her falling for Roy, whom she also credits for keeping her grounded. “I would have bought a fancier car, a fancier house – I am a Leo. My husband probably saved me from myself.”

Two months after finishing production on the third Matrix movie, Moss became pregnant. After the birth, she and Roy sequestered themselves in their Los Angeles home for 40 days. “There’s a belief in some cultures that a baby has no psychic protection around it for 40 days. Putting a tiny baby into the energy of everything, of traffic, just doesn’t make sense to me.” There would be time for everyone to meet the baby, but she wanted the bonds in her young family to develop first.

Although Moss found it easy to withdraw from the public eye, the paparazzi proved less accommodating. Three weeks after giving birth, she hoisted her son onto her hip and opened the front door, exposed in a nursing bra. Photographers camped outside began snapping pictures of Moss, who immediately burst into tears. “As a new mother, your sensitivity level just heightens in such an incredible way, and it was disturbing for me,” she says, her body visibly tensing. “There’s a feeling of massive unsafety.”

She agrees that the paparazzi culture has become worse in the last few years. “They are masters at making you feel terrible.” Moss cites Britney Spears’s car accidents as an example. “You feel like you have to get out. The ones that are following her, I guarantee, are not very nice. â€˜What kind of mother are you, Britney?’ Really mean.” Sun splashes across her face and she squints a little. “Poor thing. I just feel so bad for her.”

There’s a particularly sentimental side to Moss, one she found herself struggling with when her sons were born. She began idealizing her childhood home, entertaining the notion of moving back. “I thought, â€˜I want it to be like it was in Vancouver,'” she says. “For me to think that life is perfect in Canada – I have to remember that life is life.”

She admits to finding Los Angeles trying at times. Securing a spot in preschool for her sons was unexpectedly taxing. “The joke is that in deals now, instead of money, you have it that someone will write you a letter to get you into a school.” Moss laughs darkly. “That’s hard for me to wrap my head around, as a Canadian girl who went to school down the street.”

Each year, the family returns to Vancouver, and there are trips out east, to Quebec and New Hampshire, where her husband’s family lives. Travel is often scheduled for the winter; Moss is determined to raise good Canadian boys with a healthy appreciation for snow. “One of my greatest memories as a child was lying on the ground, snow coming down,” she recalls. “I was with the girls I babysat, singing Christmas carols at the top of our lungs to that incredible stillness of snow. I can’t imagine my sons not having that.”

It’s crucial that she protect this family time, so she remains extremely selective with her projects. “If it’s in Romania, I can’t do it. In Africa, I can’t do it,” Moss declares. “The big, long schedules just don’t work for me anymore.” Fireflies in the Garden required only three weeks on set; similarly, Fido, Snow Cake and Normal – her recent trio of Canadian independent films – all had attractively short shoot dates. (Attractive co-stars, too: She says of Snow Cake‘s Alan Rickman, “It was so effortless to be intimate with him.”)

Moss is in a position to pick and choose her parts, of course, because of the tremendous success she’s enjoyed. And in reflecting on a career that was pursued so doggedly from such an early age, Moss affirms that reality has far exceeded her ambitions. “[My life] really became about relationships, and I never took that into consideration in my dream. My dream was all about what it would look like, not what it would feel like.”

Moss is reluctant to speculate on the future, insisting, “I try not to limit myself by my limited thinking.” She allows that a television series might be more compatible with her lifestyle, and has just finished a pilot with Nip/Tuck’s creator, Ryan Murphy. Titled Pretty Handsome, it follows a father, played by Joseph Fiennes, who tells his family he’s a transsexual; Moss stars as his wife. If picked up, the series would let her remain in L.A. and work three months out of the year.

That could leave Moss with ample baby-making time, but when conversation returns to the subject of more children, she hesitates. “I’m not saying no, but at the same time, my life is so full. I’m just figuring out how to raise two of them.” She smiles and tucks a strand of hair behind her ear. “When I know there are no more babies to come, I think it’ll be a very hard time for me.” Her eyes close, and some of that sentimentality creeps into her voice. “Because that’s just the most tender, juicy part of life, right there.”