Could this be the real reason you're so tired?

Tired, irritable, depressed — those are just three symptoms associated with a state of fatigue. And while lack of sleep due to circumstances can account for occasional stints of acute fatigue, chronic fatigue may be a symptom of a health issue that should be treated rather than ignored. 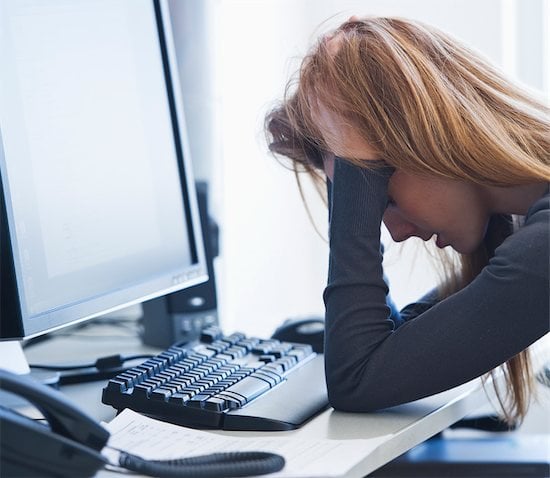 Tired, irritable, depressed — those are just three symptoms associated with a state of fatigue. And while lack of sleep due to circumstances — a new job, a new baby, a noisy neighbour — can account for occasional stints of acute fatigue, chronic fatigue (months-long bouts of exhaustion) may be a symptom of a health issue that should be treated rather than ignored.

A recent article in Real Simple suggests that people who find themselves in a perpetual state of complete collapse, both physically and emotionally, may be suffering from overworked adrenal glands, or adrenal fatigue.

When an individual is operating under stressful conditions for a prolonged period of time, the adrenal glands can get overtaxed resulting in an emotional, physical and psychological flat-line.

Adrenal fatigue can also affect sleep patterns, making you sleepy in the afternoons at work, where naps are generally frowned upon, and restless at night when you finally do get the chance to relax.

How do you get your adrenal glands in good working order? Meditation, said one of the article’s experts, as it appears to help slow or still the stress response.

That doesn’t mean you have to commit to a 30-minute meditation practice every day. You can start slowly, building up from five-minute increments.

Supplements may also prove helpful. Another expert suggested people suffering adrenal fatigue take vitamins B5 (50 mg/day) and vitamin C (500 mg/day) supplements, as there is some evidence to suggest they keep adrenals functioning effectively. Chatelaine‘s resident naturopathic doctor Nathasha Turner has written about the positive effects rhodiola can have on maintaining healthy adrenal function. She suggests 200-400 mg/day first thing in the morning.

Do you suffer from chronic fatigue? What helps boost your energy?