Here's what you need to know about what happened last night, and about our new, Liberal minority government 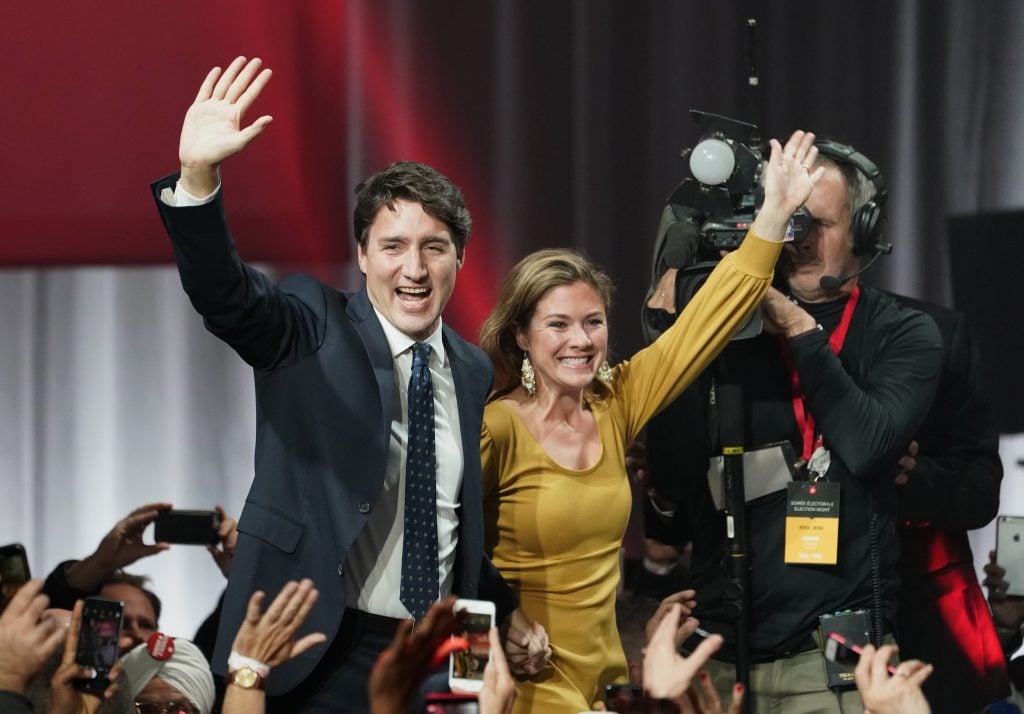 It was called “the most uncertain federal election in decades,” but at the end of the night, the outcome was what many pundits had predicted: a Liberal minority government. The Liberals won 157 out of 338 seats—27 fewer seats than in 2015, and 13 seats less than the 170 needed to form a majority government. The Conservatives trailed with 121 seats (picking up 22 seats from 2015), followed by the Bloc Québécois with 32 seats (up 22 seats), the NDP with 24 seats (down 20 seats), the Green Party with three seats (up two seats) and one independent seat. Not a single candidate in Maxime Bernier’s People’s Party of Canada won a seat, including Bernier himself.

You might be disappointed that there was no clear winner—but there could be a bright side. “We hear, anecdotally, that Canadians prefer minority governments,” says Kathleen Monk, a political strategist at Earnscliffe Strategy Group who spoke to Chatelaine in advance of election night. “People like when people are forced to work together, to collaborate, to cooperate.”

Here’s what you need to know about what happened last night—and about our new Liberal minority government.

The Bloc Québécois had a huge night

After winning only 10 seats in 2015, the Bloc came roaring back to win 32 seats in 2019 under Yves-François Blanchet’s leadership. So what does this mean? While leaving Canada is currently off the menu, Quebeckers want a party that best represents their values. These values align with a Liberal government when it comes to climate change, but not with Bill 21—the controversial bill passed with the support of the Parti Québécois in June, says Rosie Barton, senior political correspondent at CBC and co-host of The National. (The bill bans teachers, police officers, judges and many others in public sector jobs from wearing items like hijabs, turbans, kippas, and crucifixes at work.)

“What if we get to a place where the federal government decides it does want to intervene?” asks Barton, who also spoke to Chatelaine in advance of election night. “How does the Bloc Québécois respond in a Parliamentary setting?” Trudeau has said that a federal government “might” have to intervene on Bill 21, which could lead to a serious divide with French Canada.

Alberta and Saskatchewan voted out their Liberal MPs

Despite one last rally at a Calgary banquet hall on October 20, Trudeau did not succeed in saving any Liberal seats in Alberta, thanks to frustration over the poor provincial economy and the carbon tax, as well as the Liberals’ overall stance on the oil sector and perceived lack of respect for the province. As a result, all four existing red seats in Alberta flipped to blue (with one orange exception: Heather McPherson retained the NDP’s seat in the riding of Edmonton-Strathcona).

“The hatred for Trudeau in the province of Alberta is just so strong now,” says Monk. “I don’t know where it goes.” (While there has been talk of an Alberta separatist movement, Scheer is hoping it leads to a future Conservative majority, noting in his concession speech—which sounded more like a campaign speech—that his party is “the government in waiting”…”Mr. Trudeau, when your government falls.”) 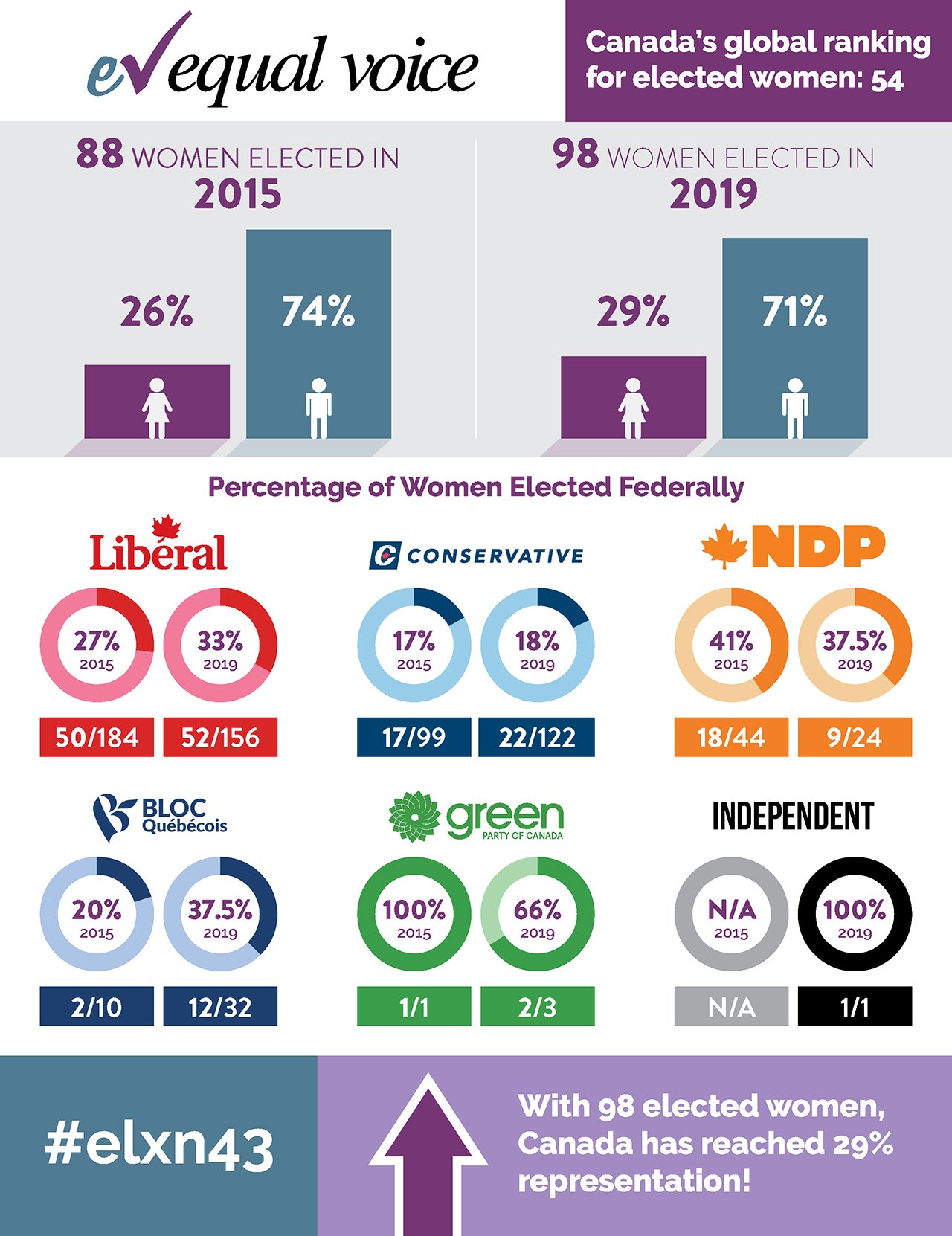 Ninety-eight female MPs were elected last night, including two Greens—leader Elizabeth May held her seat in Saanich-Gulf Islands—and one Independent (hello, Jody Wilson-Raybould). While this amounts to seven more female MPs than when government dissolved, it still works out to less than a third of available seats. What gives? “The scale of our ambition needs to be higher,” says Monk. “I strongly believe in that.”

As a minority government, the Liberals will need to rely on other parties for support

“A Liberal minority will need to get back to work, form a cabinet, and move ahead with their agenda. When needed, they ask for some help from other parties to get passed budget bills and confidence motions,” says Barton.

Minority governments typically work in one of four ways in order to gain majority support in Parliament, explains Monk. One option, she says, is to make a formal coalition with another party. In this case, Trudeau could, say, give NDP Leader Jagmeet Singh and other NDP MPs official roles in his government, effectively adding 24 NDP seats to his Liberal government, thus surpassing the 170-seat count needed for a majority government. (Singh has indicated he may be open to working with other parties, aside from the Conservatives.)

Another is to create a formal agreement for support from another party, as the Greens and NDPs did after the 2017 provincial election in British Columbia in order to defeat premier Christy Clark.

There is also the option to form a loose alliance—which would involve the Liberals agreeing “to adopt specific policies from another party in exchange for support on the throne speech, budget or major legislation,” says Monk—or just negotiating support from other parties on a case-by-case basis.

For more information on how a minority government could work, we direct you to this excellent explainer from our friends at Maclean’s.

There will likely be another election in two years

“If it’s a comfortable minority for anyone, things will be calm for about two years which is about how long these things last,” says Barton. In recent history, Stephen Harper and Paul Martin both led minority governments—Martin’s Liberal minority was in power from 2004 to 2006, while Harper led minority Conservative governments from 2006 to 2008 and 2008 to 2011.