Supercool mom and stylist to the stars Samira Nasr gives us a peek into her fast-paced New York life — plus what makes her homesick for Canada. 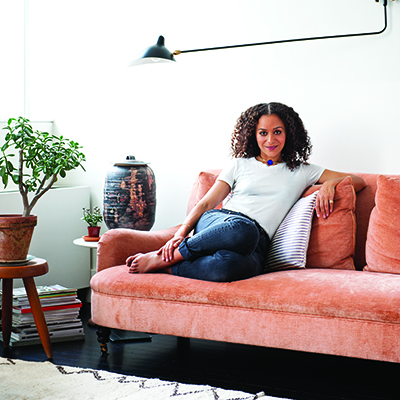 Samira in her light-filled apartment in the trendy Williamsburg neighbourhood of Brooklyn. Despite her fabulous collection of heels she has a “no shoes” rule in the house. Photo, Sian Richards.

Even if you’re not a fashion fanatic, you can probably name check Anna Wintour and Grace Coddington, the iconic grandes dames of American Vogue. But just down the way in the front row, there’s an effortlessly cool Canadian in Céline booties and a Saint Laurent blazer who is (politely, quietly and oh-so-chicly) becoming an insider icon herself — she’s probably influencing the way you dress without your even knowing it. If you haven’t heard about Samira Nasr, the fashion director of American Elle, it’s only a matter of time.

“I always read magazines and loved to dress up, even in elementary school,” says Samira. She grew up in Montreal with her brother, Riad, who went on to open Keith McNally’s celebrated Balthasar and Minetta Tavern in New York as executive chef. Samira moved to New York City herself in the mid-’90s to get her master’s in journalism. “I was never a very good writer,” she says laughing. “I did an internship at Mirabella, and after that I started assisting stylists because I needed a job.”

This happy sort-of accident led to Vogue, where Samira impressed the powers-that-be enough that she became Grace Coddington’s assistant. Then it was on to Harper’s Bazaar and high-level styling and consulting for clients including Tory Burch, L’Oréal Paris and Banana Republic. She developed a reputation as a stylist who was interested in dressing real women with her signature blend of elegant cool.

She eventually became the embodiment of the word jet-setter when she was hired as the style director for InStyle. “I got off a plane one time in L.A., and the security guard said, ‘You back again?’ ” she says. Her workdays included attending the couture collections with Cameron Diaz and styling A-list celebrities all over the world. “I was travelling constantly. One day we were in Rio shooting Jennifer Lopez; the next day we were back in New York, then off to L.A. With celebrities, you go where they are. We went everywhere: Paris, London . . . incredible, incredible places.” 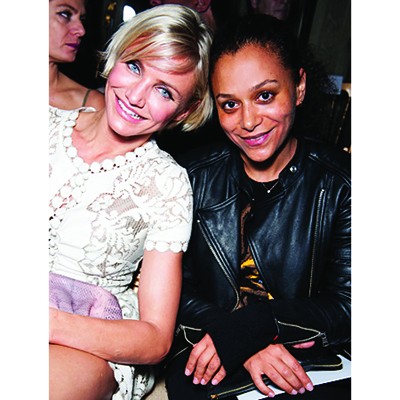 So what convinced her to give up that life, even for a job as amazing as fashion director of Elle? The answer lies in her Instagram feed: Nestled among shots of the sumptuous bouquets Chanel sent to welcome her to a fashion week and snaps of the waiters serving champagne outside the Dior show, there’s a smiling little boy named Lex. He’s grinning in a swing, wearing jaunty outfits, having a Sunday hang with “Auntie Grace” (yes, that Grace). Samira, a single mom, adopted him when he was born; he is now a year old. Just before his adoption, she was approached by Elle. “I knew Lex was coming and I thought this would be an opportunity not to travel as much, which I knew would be better for my family. Now I’m home most nights in time for bath and bedtime.”

But that doesn’t mean the glamorous life is over for Samira. She’s often snapped at gala events with the likes of artist Julian Schnabel and Tracee Ellis Ross (Diana’s daughter). “I feel so fortunate to have this job,” she says. “I get to meet all these incredible people.” But her favourite part of any fashionable evening out? “When I get home afterwards, I secretly hope Lex wakes up so I can snuggle him,” she says, confessing, “Maybe I slam the door just a little too loudly.” 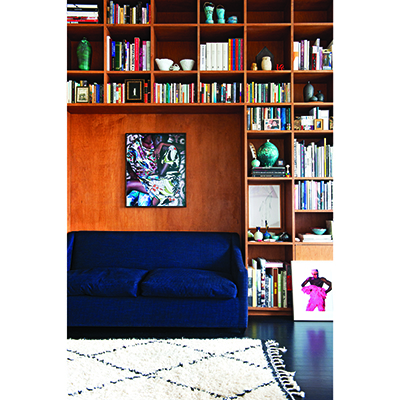 Bookshelves house art books and objects collected from Samira’s travels: The photograph on the wall is by Vivian Sassen and the pink photograph is by fellow Montrealer Terry Tsiolis. Photo, Sian Richards.

My proudest moment was . . . becoming a mom, and holding my son, Lex, for the first time.

I wish i were better at . . . skiing. I feel like as a Canadian I should be an awesome skier, and I’m not.

The biggest mistake I ever made was . . . being afraid to make a mistake. I wear my mistakes like badges of honour and have grown from all of them. It took me a long time to learn this lesson.

I’m currently reading . . . I just read the New Yorker every week. It’s all I have time for and sadly, I still don’t always get through them.

My guiltiest pleasure is . . . Pleasure should never be associated with guilt.

My dream vacation is . . . Nova Scotia! I have always wanted to go and have never made it there.

My personal style is . . . practical, and boyish with a high heel.

Becoming a mom taught me . . . a new level of patience.

5. Cashmere cape or coat by Givenchy, Céline or Saint Laurent