Nursing models are popping up in ads and magazines. Are the glossy images a celebration of motherhood or just another way to make new moms feel bad? 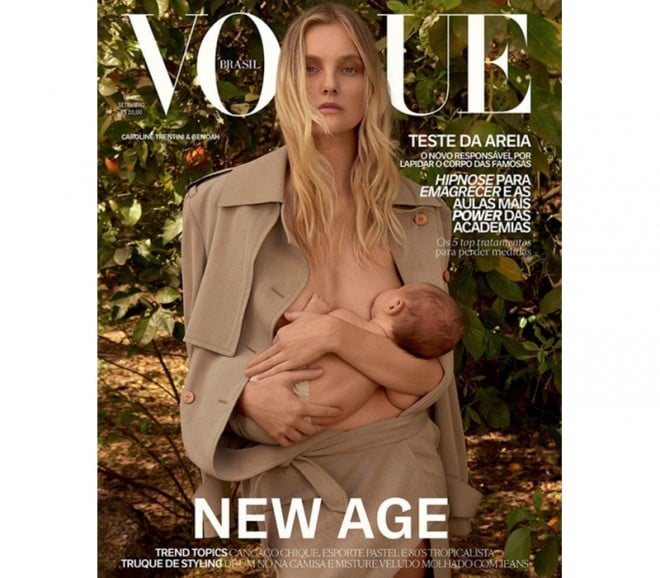 Model Caroline Trentini looks beatific on the cover of the September issue of Vogue Brasil. With her blonde waves flowing, and naked under a camel trench coat, her only accessory is the infant attached to her nipple. She celebrated the image with a grateful post on Instagram: “Breastfeeding my baby boy for @voguebrasil THANK YOU.”

Like velvet and statement furs, nursing is on trend. Doutzen Kroes was featured breastfeeding inside Vogue Netherlands, as was Nicole Trunfio on the cover Elle Australia, who thanked the magazine for helping to #normalizebreastfeeding. The upscale fitness chain Equinox ran an ad earlier this year with an image of heiress Lydia Hearst, dripping in jewels, breastfeeding twins. And last month, Prime Minister (and one-time Vogue model) Justin Trudeau tweeted a soft-filtered picture of his wife nursing in honour of World Breastfeeding Week. The nutritional, economic, environmental and psychosocial benefits of breastfeeding are myriad. And still, every week or so, a story crops up on social media feeds or on feminist blogs about yet another woman who was criticized, leered at, or humiliated for nursing in public. The glamourous images in Vogue and Elle might not represent the reality of breastfeeding for mere mortals — where are the nipple pads and stretch marks? — but they do push the issue into public consciousness, raise awareness about nursing and remind the world that even a Victoria’s Secret model’s boobs have a purpose beyond filling out lingerie. 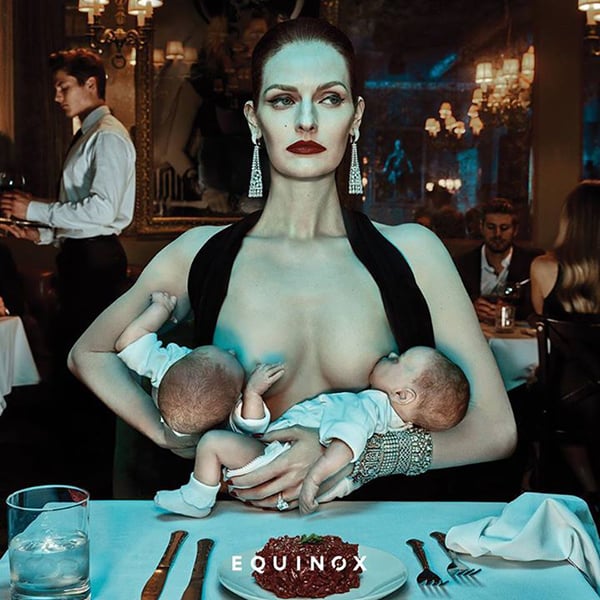 This slicked-up celebrity embrace of lactation pride does have its pitfalls, though. Twenty five years ago, Annie Leibovitz’s Vanity Fair cover shot of a resplendently pregnant and nude Demi Moore was scandalous. Today, all kinds of famous women flaunt their baby bellies in skimpy bikinis. But like the nursing fashion models, these sorts of images can feel more oppressive than liberating, a reminder that someone else is doing motherhood better, hotter and more fabulously than you.

Being pregnant and nursing used to alleviate some of the beauty standard pressures, giving women a chance to embrace comfy bras and stretchy pants. Now, a pregnant lady is expected to rock a body-con dress like Kerry Washington and a nursing mom has to measure herself against the lithe and stylish Miranda Kerr and Olivia Wilde. These celebrities and models might trumpet the pleasures of maternity, but their experiences of haute couture mommyhood resemble nothing like the off-the-rack motherhood most of us know.

The most obnoxious and offensive example of this was in 2013, when model Gisele Bündchen posted a photo to Instagram in which she is nursing while being primped by a hair stylist, a make-up artist and a manicurist. The original caption read, “What would I do without this beauty squad after the 15 hours flying and only 3 hours of sleep #multitasking #gettingready.”

Related: Everything you want to know about breasts and then some

Soon after, she removed “#multitasking,” in response to complaints that being attended to by a team of aestheticians hardly seemed like any kind of tasking at all. (Bündchen, it should be noted, has a private chef, among other domestic staff.) Even worse, three years earlier, she had to apologize after telling Harper’s Bazaar, “There should be a worldwide law, in my opinion, that mothers should breastfeed their babies for six months.”

Bündchen’s ignorance and insensitivity, though extreme, isn’t all that different from a particular type of smug-mommy nursing evangelism, which views the ability to breastfeeding as evidence of superior maternal ability. Like other forms of competitive parenting, breastfeeding has become an imperative — and woe to the woman who can’t, or chooses not to, nurse. 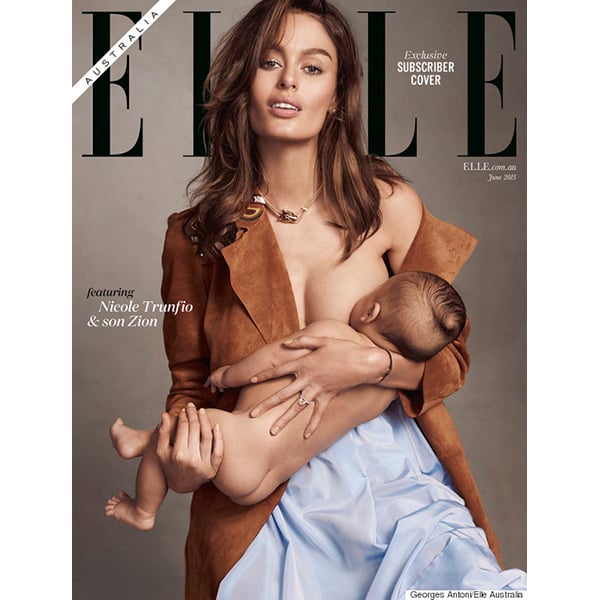 Nicole Trunfio and her son the cover of Elle Australia. Photo, Instagram/@nictrunfio.

For adoptive mothers, for gay dads, for women who cannot breastfeed for medical reasons, this reverence for nursing as “natural” or “best” (as in the slogan “breast is best”) comes across as condemnation. And not just for them: for women who do give birth and wish to nurse, the major barriers to doing so are not shame, or fear of public condemnation, but rather a lack of resources and the absence of the sort of workplace flexibility that allows for several month’s leave, or the time and privacy to pump.

To be clear, for many women, breastfeeding is a pleasure, and a wonderful bonding experience with their child. But it’s also, to be equally clear, a serious, time-sucking chore. Here’s journalist Hannah Rosin in a 2009 article in The Atlantic titled “The Case Against Breastfeeding”: “Let’s say a baby feeds seven times a day and then a couple more times at night. That’s nine times for about a half hour each, which adds up to more than half of a working day, every day, for at least six months. This is why, when people say that breast-feeding is ‘free,’ I want to hit them with a two-by-four. It’s only free if a woman’s time is worth nothing.”

Breastfeeding awareness and advocacy means nothing if it doesn’t address the material circumstances — the laws, policies and social expectations — that govern women’s lives. Those photos of models nursing in the pages of Vogue and Elle are undeniably beautiful, and even inspiring. But their idealization of motherhood as flawless, exquisitely styled and effortless is like everything else in their pages: a gorgeous and unattainable fantasy.

More:
Lainey Lui answers every question you have about the Brangelina split
Uptalk Ep 2: Kathryn Hahn talks Transparent, motherhood and career after 40
“I pranked my bully boss.” 7 women share their biggest career risks