Sarah Polley Runs Towards The Danger In Her New Memoir

The collection of essays spans her traumatic experiences as a child star through an almost-career-ending brain injury in 2015. 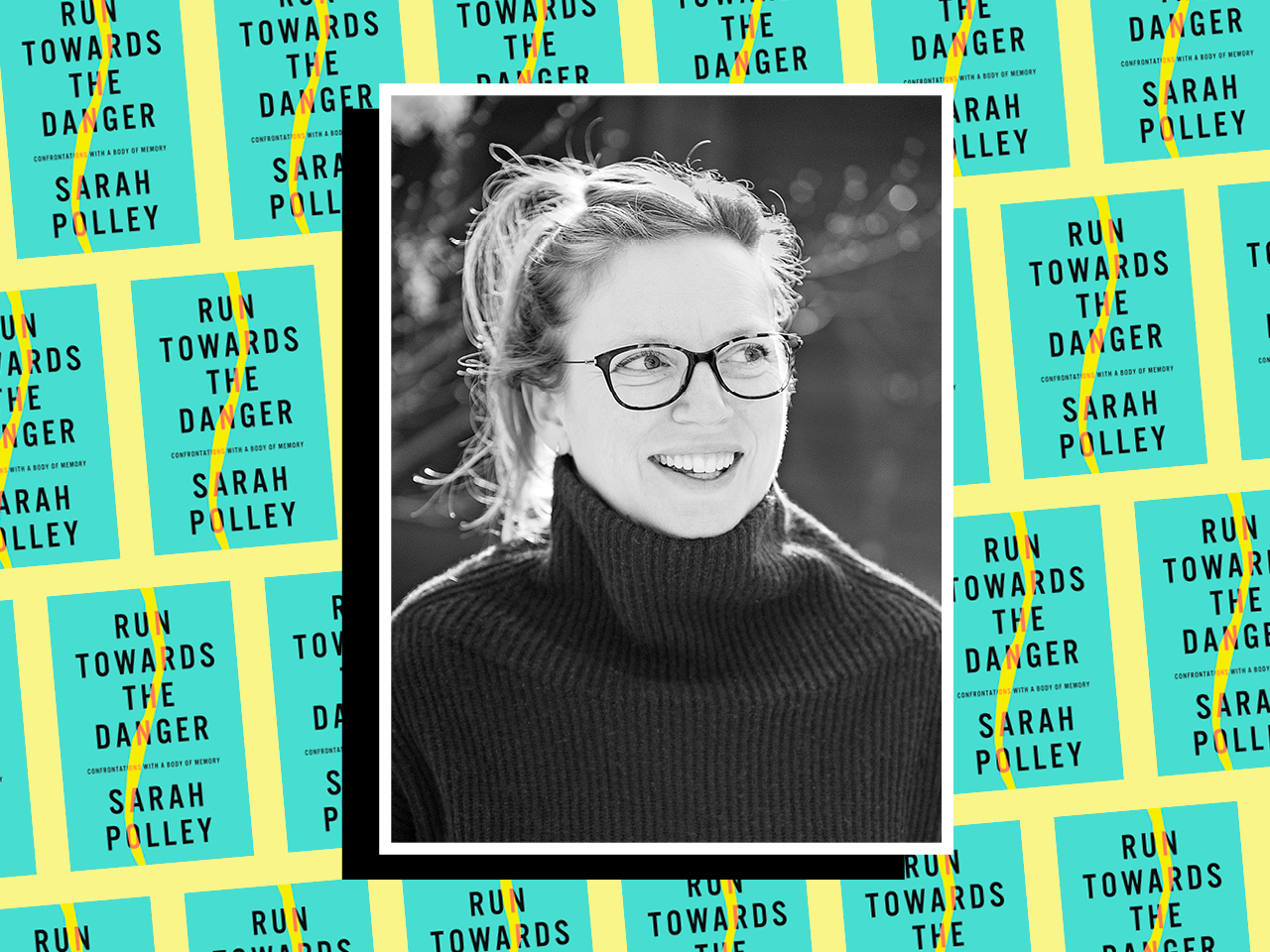 In her newly released memoir Run Towards the Danger, Canadian actor, director and screenwriter Sarah Polley isn’t avoiding the tough stuff. The collection of essays spans her traumatic experiences as a child star through an almost-career-ending brain injury in 2015. It also includes details about a violent sexual experience with Jian Ghomeshi when she was a teen—something she has never spoken about publicly before.

Here, Polley talks about her decision to stay quiet during the original Ghomeshi trial, how her time as a child actor informs her own film sets and why self-care culture could stand to gain a little grit.

Your new collection of personal essays is called Run Towards the Danger. Can you explain the title?

In 2015, I was at my local community centre, rooting around in the lost and found and a fire hydrant fell on my head. The result was a traumatic brain injury that lasted more than three years. During my concussion recovery, I went to a lot of different doctors and specialists, and the advice was always “Listen to your body,” [and] “Respect your limits.” For more than three years, I took discomfort as a reason to turn away. And then I heard about a doctor in Pittsburgh with a different approach. He said my brain had become less adept at the things I was avoiding. I began the challenging and painful process of doing the things that hurt the most and, slowly, they didn’t hurt anymore. The idea of moving towards the difficult things rather than away started to bleed out into the rest of my life, including writing this book. I’ve always been someone who listens to my anxiety, so this was a real paradigm shift that really opened up a whole new world of possibilities.

What you’re saying—to bare down in the face of discomfort—is very different from the messaging we see in women’s culture these days. Half of Instagram is plaques about being gentler, going easy on ourselves…

I think, definitely, we are steeped in the culture of honouring our limits, and perhaps that is better than the alternative. I don’t want to throw this idea of being kind to ourselves out the window. I just think that maybe there’s not enough emphasis on resilience. We start to believe we are weaker than we are, that we have less grit than we actually do. I also think self-care has become this abused term. As far as I know, it originated around grassroots activists who were giving everything they had to moving things forward for a lot of people and who needed to take moments to care for themselves. And I feel like now the people I hear talking about “self-care” come from a very privileged demographic.

Look, I don’t want to sound judgmental or to suggest that everyone can’t benefit from taking care of themselves, especially not these days. I just feel like it becomes this thing where some of the people who are taking part may be the ones who need it the least.

Was writing the book a danger that you ran towards?

I’ve been working on some of the essays in my book for years. A lot of them were too painful to try to make a project out of. I felt like if I looked at these experiences for too long I would turn to stone. After my concussion and this new approach, I realized that actually, these stories are becoming harder, more haunting, because I was avoiding them.

In one of your essays, you reveal you had a violent sexual experience with Jian Ghomeshi at his home when you were 16, an experience you blocked out until multiple women came forward with allegations against him. Why did you decide to share this experience now?

I have been wanting to tell my story for a while and there are all sorts of reasons why that has been delayed. The whole book is about memory and how the past informs our present and vice versa, and my experience [with Ghomeshi] is also about the relationship to memory and how it works after trauma. It’s also about why so many people don’t tell their stories—that instinct not to speak, which I think is profoundly misunderstood.

You write about how, in your interactions with Ghomeshi as an adult and a filmmaker, your vibe was deferential and often flirty.

I think what I understand now is that my behaviour was completely normal in the context. Is it comfortable? No. Does it make me wince? Yes. But I think there is disassociation that takes place. You don’t want to address the discomfort of what happened. And that leads to behaviour that may look perplexing from the outside. [During and after the Ghomeshi trial] there was so much criticism of [accusers] whose behaviour after the fact “didn’t add up,” so that made me want to publicly cross examine myself.

You never actually say whether you have regrets about your decision not to come forward before the trial. Do you?

I think that if I hadn’t had a newborn and a toddler at the time, things may have been different. In my essay, I talk about how I spent months investigating whether my going public would be helpful and almost across the board I was told no, my story wouldn’t lend credibility because it is so flawed. And like I said, I had two tiny people to protect. Do I feel great about it? No, of course not. But I don’t think I could have made a different decision.

Are you nervous about the reaction this story will get?

My concern is that the Ghomeshi essay is one of six, so I worry that it will overshadow everything.

A few of the essays deal with the very difficult time you had as a young performer. It feels wrong to say I was a Road To Avonlea fan after reading about how hard that time was for you.

Well, it wouldn’t be any better if nobody had loved the show and I was miserable. These were formative years, and I felt trapped doing a job in a predominantly adult environment under a lot of pressure when I just wanted to be a kid. I will say writing these essays was a way of working through difficult times. I’m really happy with my life as it stands, so it’s hard to look back with regret.

You talk about how, as a society, we decided a long time ago that children should not work and yet in this one industry known for being particularly exploitative, the rules don’t apply. I found myself agreeing with you, but also wondering what you propose as a solution?

I think at the very least, there should be time limits around how much a kid can work in a year. It’s a question I’ve struggled with on my own sets. I just made a movie with some child actors [the film adaptation of Miriam Toews’s Women Talking] and because of my own traumatizing experiences, I put absurd amounts of effort into making sure it was an okay experience—but it was a struggle. I just don’t know how we can expect an industry that’s driven by incredible time and financial pressures to be a healthy environment for kids. I don’t have a solution. In the book, I am more making the point to parents who may be making decisions for their individual children.

You talk about your own father a lot, and the times where you felt he could have done a better job of protecting you against the industry. But it also felt like the book was a journey towards forgiveness. Is that something you felt?

Absolutely. I think something I have learned is that you can’t skip steps with this stuff—you can’t be in a rush to get there. [Writing the book meant] getting up close and sort of nose-to-nose with some stuff I didn’t want to look at and on the other side of that, forgiveness is possible. Not for everybody. I’m not saying that as a directive. But for me, I burned a lot of the difficult stuff off through the process of thinking about it and writing about it. And being in therapy. And the dad that I’m left with is this sweet guy who, you know, was brilliant, and also didn’t have any skills in terms of just day-to-day life.

Your book ends in December 2019, which now feels like the end of “the before times.” What sort of danger have you been running towards these days?

I made a film that was a lot bigger than anything I have made in the past. And I was somebody who was extremely locked down during COVID. Like, my kids didn’t go to school for a day in 2021. We were really, really strict, so to go from that to a film set was a lot. I got advice from epidemiologists about the best time to shoot so that we hit that window of low numbers over the summer. And we had some very intense safety measures on set. But it was my first film in 10 years and it was a really big deal for me for so many reasons. I tend to be a big over-thinker, even looking for reasons not to do things. I had to push back those instincts and just jump in.

Run towards danger! This mantra really does have the makings of the self-help empire.

Hey, I have zero snobbery about self-help. I’ve consumed a lot of it. If this book could be on a shelf between self-help and essays, I’d be thrilled.

March 7, 2022: Updated to change the nature of Sarah Polley’s interaction with Jian Ghomeshi, as well as her age during that time.