Marci Ien On Being Stopped By Police In Her Own Driveway

'The ramifications of that moment—the fear I felt—continue to this day.' 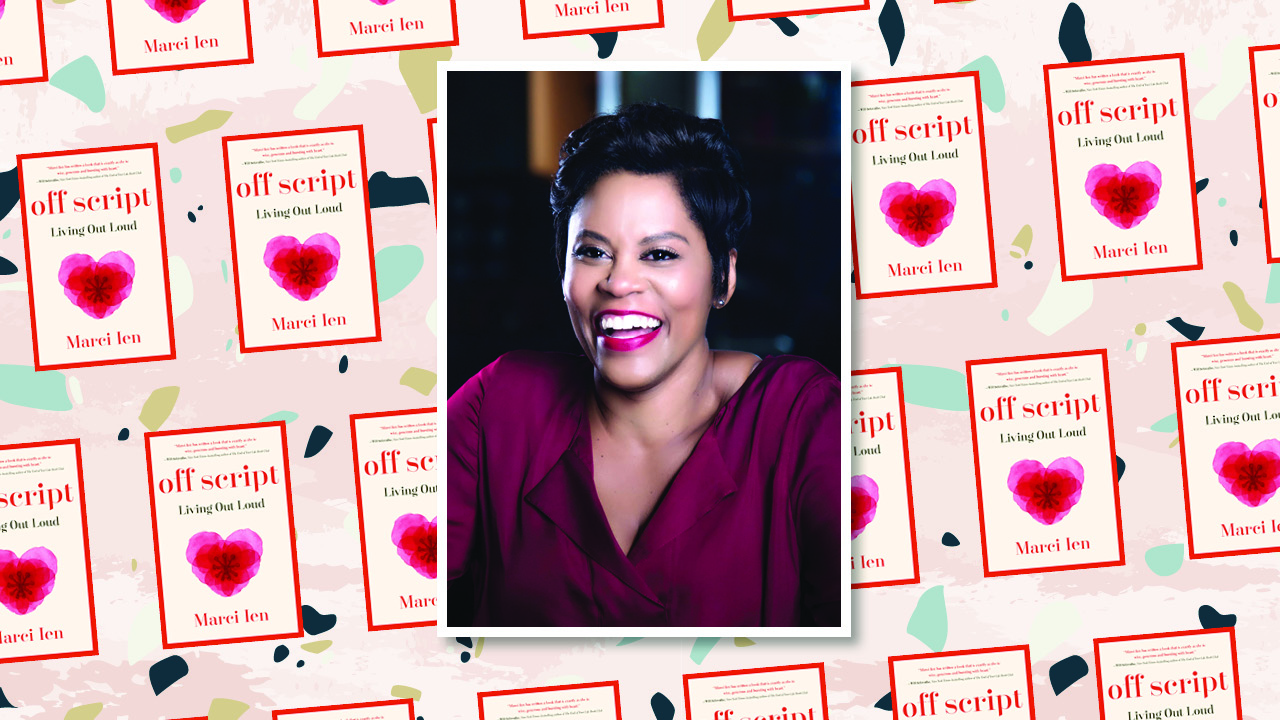 The following is excerpted from the memoir Off Script, out now from HarperCollins. In it, Marci Ien—who was just elected as the MP for Toronto Centre—writes about her experiences working in journalism, including as the first Black woman in Canada to co-host a national morning show.

The couple of months during which we produced “In Their Own Words” was a tremendously busy time at work. In addition to working on the Bell Let’s Talk Day special and co-hosting a daily talk show, I’d also hosted the Santa Claus Parade with Melissa Grelo and, on top of that, worked on a network special with Jann Arden.

By the time February rolled around, I was exhausted and very much looking forward to a long weekend. I had driven Blaize to my sister’s house for a sleepover with her cousins. My sister and Mom had gone out together to a banquet event. I was on my way back home to Lloyd and Dash. I remember being happy and looking forward to relaxing. As I pulled into my driveway, I saw the flashing lights.

The police officer got out of the car and headed toward mine.

I jumped out of my vehicle to see what the issue was. He told me forcefully to get back into my vehicle. His tone made me anxious. I quickly complied. As he approached the driver’s side, he gestured for me to lower the window. I already had my licence and ownership waiting. I had grabbed them before he made his way to my truck. This is what Black people do. No false moves. Keep your hands where they can see them. Look the officer in the eye. As he was holding my ownership—where my address was clearly printed—he asked whether I lived here. I said yes. He said I had failed to stop at a stop sign. He said he’d be back. I felt sick. This awful feeling in the pit of my stomach. I quickly called my sister. I wanted someone to know where I was and what was happening. I didn’t call Lloyd, who was inside the house with Dash. I pictured him coming outside, being upset, and then who knows what might happen? He and Dash were safe in the house and I wanted it to stay that way.

When the officer returned, I told him that I’d been stopped in my neighbourhood a couple of times already over several months. That I’d been asked whether my vehicle was my vehicle. Whether I lived around here. Driving close to home, running errands on my off time, I was likely to be wearing Converse running shoes, a hoodie, maybe a pair of old jeans with rips in the knees. A ball cap. The officers who stopped me made me feel I didn’t fit into this neighbourhood looking like that. What was I doing there? they seemed to imply. I told the officer on my driveway that I hadn’t been given a ticket in any of these other stops. I said I was so tired of this. He just looked at me. I said to go ahead and give me a ticket. That if I’d done something wrong, I was more than happy to pay the price

He said good night and walked away.

I took a few minutes to try to collect myself, and walked up to the house. As soon as I opened the front door, I fell apart. Dash, who was six years old at the time, asked why I was crying. I told him that an officer had stopped me on the driveway, and I was upset. Lloyd immediately went to the local precinct and came back with paperwork to file a report. While he was gone, I called my friend and co-host Lainey. Through tears, I asked her what I should do. Should I speak up? Go on social media? “No,” she said. “This deserves more. Write something, Marce. There isn’t a newspaper in the country that wouldn’t take a written piece about this from you.”

I had never written a story for a paper, let alone a personal story. But as soon as Lainey brought it up, I knew it was the right thing to do. I contacted an editor at the Globe and Mail, who said he would take an op-ed piece.

I had scheduled a short getaway at a spa with my sister: work wasn’t supposed to be a part of our retreat. But I spent the first day that we were there writing about the stop. It went back and forth between the editor and me. When it was finished, I alerted my senior managers at work, letting them know that it would be published the following Monday morning.

I knew that the piece would create a stir, but I wasn’t pre- pared for the amount of vitriol that came my way. My story, “The Double Standard of Driving While Black—in Canada,” trended across the country. There was support and lots of positive responses. There were kind people who wrote to thank me for the piece. Others wrote to share their own stories. Federal Liberal MP Ahmed Hussen, then the minister of immigration, refugees and citizenship, told me of his experience being tailed by police on the way to a meeting in St. John’s, Newfoundland. (He has made a TED Talk about this: the experience rattled him, bringing back his experience as a youth growing up in Toronto’s Regent Park.) But those who claimed that I had broken the law and was now playing the “race card” were much louder.

Meanwhile, instead of reaching out to me, the Toronto Police Service used social media to get its message across. Toronto Police Staff Superintendent Mario Di Tommaso tweeted: “I have viewed the video footage of your vehicle stop. You were stopped because of your driving behaviour. You failed to stop at a stop sign. It was dark. Your race was not visible on the video and only became apparent when you stepped out of the vehicle on your drive way.” Mike McCormack, then the president of Toronto Police Association, dug up an article in which I’d said that I “speed sometimes” to illustrate that my driving habits were suspect.

And the chief of police then Mark Saunders, called my workplace, wanting to speak to my superiors. My boss told him that the only person that he needed to speak to was me. My boss gave me Chief Saunders’ phone number, and I called him. We decided to meet at a neutral location, an office at Ryerson University. An executive producer from CTV accompanied me. “I don’t want you to go alone,” she said. I was so grateful for her support.

When we arrived at the office, we met Chief Saunders, who was accompanied by another officer. The chief and I went into a private room. His first words were, “Marci, this is not racism.” I disagreed. I said that if I had rolled through a stop sign, then I was more than willing to pay a ticket. Why wasn’t I stopped when the infraction happened? Why was I tailed to my driveway? Why was I asked whether I lived in my home while he was already holding my insurance and licence with my address clearly printed on both documents?

He was upset that I had talked about it on the show. He was upset that Lainey had reminded me on-air what I had said to her when I called her that night: that I’d feared for my life. I hadn’t even remembered saying that until she brought it up. The fear was visceral.

What Chief Saunders, as well as those who’d had so much to say via social media, didn’t bother to ask me was this simple question: “Why were you afraid?”

There is fear because a traffic stop isn’t just a traffic stop. When it happens, thoughts of those who didn’t survive them surge. As a reporter, I’ve seen more video and read more details than most people. There is a psychological toll to watching people who look like your dad, mom, sister, kids and nieces dying at the hands of police officers. This is not just an American issue. A report by the Ontario Human Rights Commission published in the Globe and Mail in 2018 showed that Black people are twenty times more likely to be shot dead by police than white people. While Black people make up less than ten percent of Toronto’s population, they were involved in seven out of ten fatal shootings by police. Robyn Maynard, author of Policing Black Lives, says this report reveals a disturbing truth: “When it comes to law enforcement, when it comes to the police, there is an overarching reality of violence that is often a part of the fabric of everyday life for Black people in this country. I think this data is absolutely damning and reveals something very important.”

I know there are many good and fair police officers. But I also know that every Black man close to me has been stopped by police—and not for the right reasons. Maybe they were walking home late at night. Maybe the car they were driving was too flashy. Maybe, like my friend Dwight suggested, police were looking for someone whose description he matched. So there is a certain amount of anxiety that comes along with being stopped. Not to mention being stopped several times. It’s interesting what happens when someone speaks out and that someone is a Black woman. The “angry” label is immediately applied to you. Who are you to speak up? Sit down. Know your place. Shut up. How dare you claim racism?

I never saw the tape. I didn’t need to. I know how I felt. I know what was said. I don’t regret coming forward, but I sometimes think that maybe I should have been a bit clearer in the piece I wrote for the Globe. The point was not whether I had rolled through a stop sign. I was perfectly willing to be issued a ticket if I’d committed a traffic violation. But that was where the story stopped for many people, who said I broke the law. Did they think I thought I was above it?

No, I didn’t think I was above the law. The issue was not the ticket; it was what happened to me on my driveway. How I felt and how afraid I was. The devastation of being treated in what felt like an inhumane way—as if I didn’t belong there. In my neighbourhood. Outside my own home. The ramifications of that moment—the fear I felt—continue to this day.