The Miami Herald reporter's new book on the Jeffrey Epstein saga is a look at the many ways that privilege can trump justice, but also the successes of the #MeToo era. 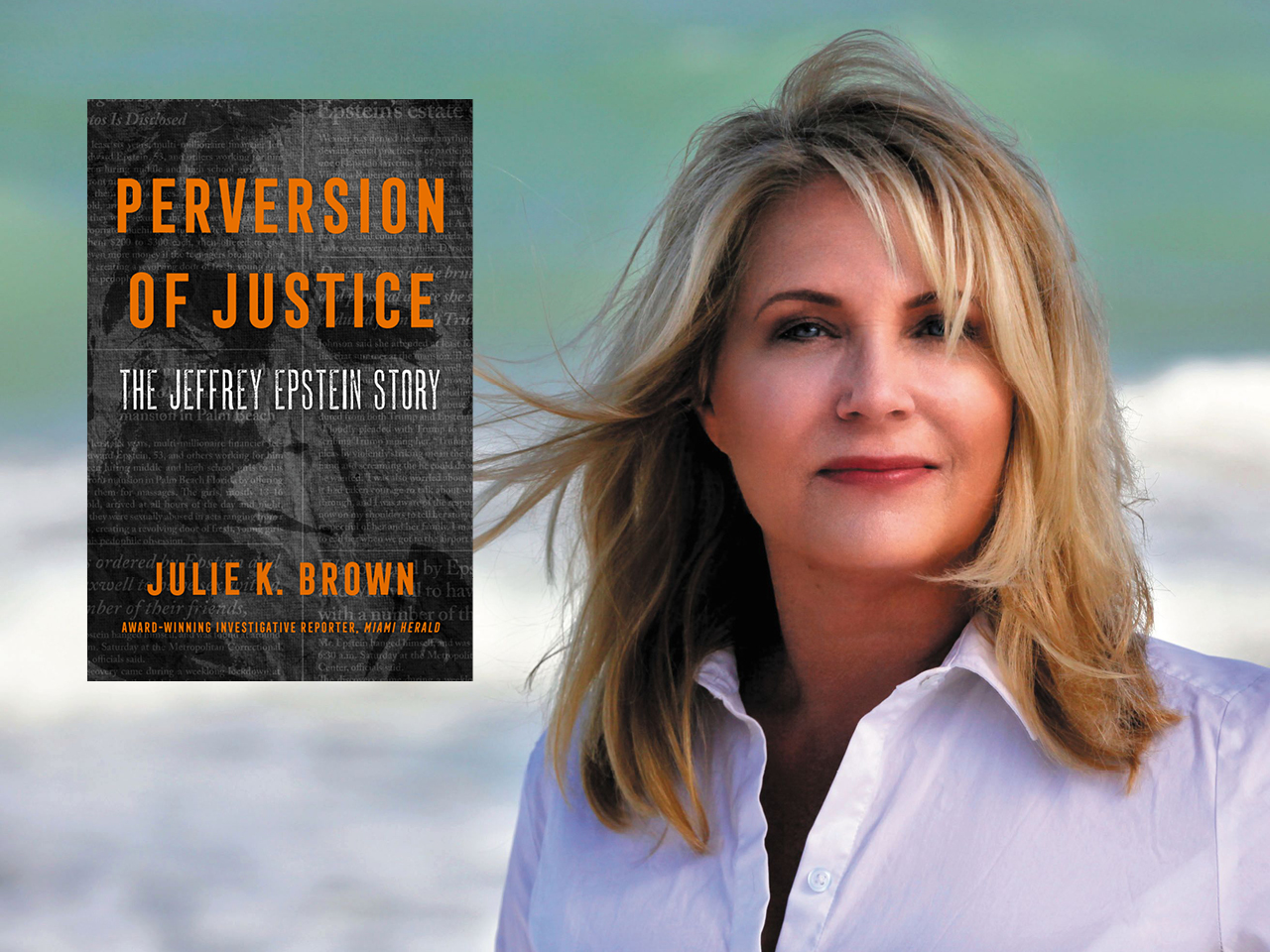 In 2016, Miami Herald journalist Julie K. Brown was on the hunt for a new story. So, the award-winning investigative reporter turned her attention to re-examining a decade-old case against shady Palm Beach money manager Jeffrey Epstein. She had a timely hook for taking a second pass on the story: the federal prosecutor, Alex Acosta, who had signed off on an extraordinary plea deal that let Epstein and his co-conspirators avoid sex trafficking charges in 2008 was settling in as then-President Donald Trump’s new labor secretary. Meanwhile, the 63-year-old Epstein had put his brief stint in jail as a sex offender behind him and was living a life of luxury, criss-crossing the globe when not in his palatial seven-storey townhouse in New York City.

After two years of reporting, Brown published a three-part series about Epstein, his victims and his uniquely successful journey through the justice system in the Herald. The public outcry that resulted was significant. New sex trafficking charges were filed against Epstein in the state of New York. In July 2019, Acosta resigned from Trump’s cabinet, a month before Epstein would be found dead in his NYC prison cell. In 2020, his former ally and alleged accomplice, Ghislaine Maxwell, was also arrested and charged with conspiracy and sex trafficking. (She is currently in jail awaiting trial.)

The Epstein saga is a big story that boasts a huge cast of characters and a lot of moving parts, all of which Brown pieces together in her new book, Perversion of Justice: The Jeffrey Epstein Story, which is out now. Here are five things to know before you dive in.

The book breaks down the original case against Epstein

If you’ve ever wanted to know what went down in Palm Beach in the early 2000s with Epstein, this is the book for you. But brace yourself: it’s a dark tale. Brown identified 80 women who said they were abused by Epstein from 2001 to 2006 alone, of which eight agreed to be interviewed.

It began in 2005, when a woman called Palm Beach police to say that Epstein had sexually assaulted her 14-year-old stepdaughter (the number of young women claiming they’d been lured to Epstein’s villa under false pretences and then assaulted would grow into the many dozens as the investigation continued). Evidence mounted that this was not an average sexual assault case, but one incident in a network of exploitation that preyed on young women for the benefit of wealthy men.

In 2008, Epstein was indicted for sex trafficking charges, but in an unusually generous move, then-U.S. Attorney Acosta allowed Epstein to plead to two counts of solicitation of prostitution instead, a deal that cast the minor girls he abused as sex workers rather than victims of abuse. He and his accomplices were also granted immunity from prosecution of the more serious trafficking charges. (A 2020 Department of Justice review would later determine Acosta showed “poor judgment” in resolving the investigation into Epstein with a non-prosecution agreement.)

It paints a grim picture of the U.S. justice system

The evidence that Epstein was a serial abuser who also engaged in sex trafficking girls and young women was always compelling—so why did he get off so easily? That question formed the heart of Brown’s original series, and it informs the book as well. The answer is bleak and predictable: it’s because he had the means and the influence, and he shared his spoils among men with the same. As such, Brown’s book isn’t just about Jeffrey Epstein. It’s also about how individuals like him are able to use their wealth and connections to avoid the consequences and punishments the criminal justice system metes out on poor people daily.

Privilege trumping justice is a story as old as time, but in Brown’s hands that storyline is broken down in infuriating detail. She also identifies the cast of powerful figures that helped Epstein on his remarkable journey through the system, a list of high-profile names that include famed lawyer and Harvard professor Alan Dershowitz, and Ken Starr, the White House prosecutor that led the Whitewater/Lewinsky investigation into former U.S. President Bill Clinton, for which he was impeached. There’s also a remarkably flexible population of sheriffs, prosecutors, officials and even prison guards who appeared willing to bend the rules for Epstein’s benefit. But it’s not just villainy Brown isolates; she also illuminates how complicity works: some people tried to do the right thing but ultimately didn’t want to face the consequences of being on the wrong side of power.

It’s a tangled web of connections and compromises that indicts more than just one predatory male millionaire. “Epstein got away with his crimes because nearly every element of society allowed him to get away with it,” writes Brown. “Professional, legal, and moral ethics were set aside for a broken system of ethics that places corporate profits, personal wealth, political connections, and celebrity above some of the most sacred tenets of our faiths, our teachings and our democracy.”

The reporter offers a rare behind-the-scenes look at the gruelling slog entailed in investigating the case against Epstein more than a decade after the first allegation was made. Brown chronicles the challenges inherent in taking on a story with this kind of scope, especially in an industry that is contracting. Over much of the 435-page book, Brown reveals the stops and starts of her investigation and the amount of effort required to take the largely redacted 100-plus-page police report and build out a story. She details how she gained the trust of some of Epstein’s victims, who were justifiably angry with how the case had been handled. She also recounts her experiences dealing with the aggressive tactics of many of Epstein’s most vocal and powerful supporters.

It is a tale of tenacity, too

Perversion of Justice reveals what Brown terms the “lopsided” nature of justice when the accused is a wealthy friend to world leaders and billionaires and the victims are girls and young women with no money, no status and no cultural currency. But it is also revelatory as to the ways in which injustices can be exposed when people use what leverage they do possess to hold power to account. Brown carves out significant space to honour the perseverance of lesser-known individuals who continued to pursue Epstein regardless of his vast wealth and connections to world leaders like Donald Trump and Bill Clinton and whatever you’d call Prince Andrew.

She gives space and recognition to Palm Beach police officers like Joe Recarey, who was one of the original investigators into Epstein, and to the tireless advocacy of women like Virginia Giuffre, who is largely responsible for Ghislaine Maxwell’s current incarceration. Courtney Wild, who was abused by Epstein and worked for him to recruit girls, also launched a suit against the Department of Justice, claiming the 2008 plea deal violated the Crime Victims’ Rights Act (the case was unsuccessful). That Wild acted, sometimes from a jail cell, (unlike Epstein’s, Wild’s cell door was locked), only puts the system to further shame.

It’s a tribute to the influence of #MeToo on journalism

Brown wasn’t the first writer to attempt to take on Epstein. Others before her had tried, but were either ignored, intimidated by his influence, or had their stories reduced to the status of innuendo, or saw them simply go unpublished. Brown took Epstein on at the precise moment the culture was actively engaged in looking at the ubiquity of sexual violence against girls and women.

It was thanks to the social justice movement #MeToo and to the many legions of women who came forward to reveal their stories publicly that the cultural climate and momentum shifted from compliance to confrontation, and from appeasement to prosecution.

#MeToo made more space for better journalism to thrive and opened the door for holding the powerful to account when it comes to discussing the epidemic of sexual abuse of girls and women. Brown shows just how powerful that journalism can be when the reporter is fearless and the timing is right.