These YA comic books help fill some glaring omissions in Canada's understanding of its past. 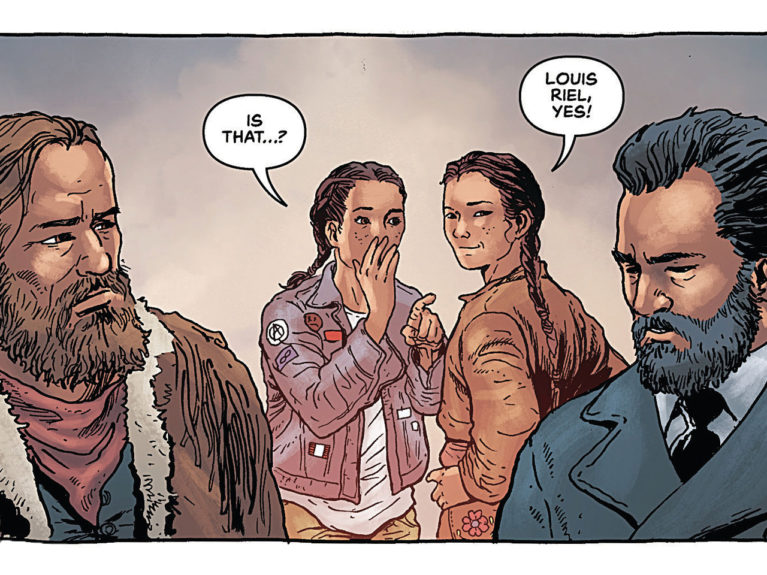 In Katherena Vermette’s A Girl Called Echo series, a 13-year-old Métis girl finds herself with the incredible ability to transport between past and present. It’s a skill that allows her to stand witness to crucial moments in 19th-century Métis—and Canadian—history, including the Pemmican Wars, the Red River Resistance and the Northwest Resistance. In Road Allowance Era, the final instalment of the series released April 27, Echo travels back to 1885 and sees the fallout of the Northwest Resistance, the execution of Louis Riel and how the Manitoba Act‘s promise of land for the Métis has gone unfulfilled. The last book, while chronicling the loss and painful plight of the Métis, portrays Echo’s ability to claim a triumphant future by channelling the strength and resilience of her ancestors. As Echo learns about her heritage and history in these gorgeous graphic novels, so do we.

Illustrated by Scott B. Henderson and coloured by Donovan Yaciuk, the striking work brings to life a quiet protagonist that Vermette doesn’t believe would be as well represented in a regular book. “[Echo’s] very quiet, so you really have to see her,” says the author, who has also published two books of poetry, a novel and a number of picture books. “I don’t think she’d be as powerful as she is if I’d written her in a novel.” Although Vermette’s publisher, HighWater Press, had a full slate of graphic novels by Indigenous creators, there was a gender gap. HighWater suggested Vermette help fill it with her own graphic novel and began asking other women to bring their stories to life in this unique way, too.

One of those women is Tasha Spillett-Sumner, a high school educator who likes that graphic novels are accessible to all types of learners. The first book of her Debwe series, Surviving the City, focuses on best friends Miikwan (who is Anishinaabe) and Dez (who is Inninew) as they navigate the challenges of growing up in Winnipeg. With Miikwan’s mother’s disappearance forcing her to contend with moving to a group home, the story highlights the tragedy of Canada’s MMIWG. “I was inspired to write a story like mine, like the ones of the young women I grew up with, the young women I taught and the young women coming up in the city,” says Spillett-Sumner. The next book in the series, From the Roots Up, explores Dez grieving the loss of her grandmother, living in a group home and coming into her Two-Spirit identity—something Miikwan struggles to understand and show up for as a supportive ally.

For Vermette, researching her story reinforced how much of Canadian history is told through a settler-colonial lens. “You really notice that Indigenous history in this place now called Canada, depending on who’s telling it, [is] a completely different story,” says Vermette. “History really relies on the teller.” Engaging, informative and beautiful, the books help fill some glaring omissions in this country’s understanding of its past.