Camilla Gibb on heartbreak, hope and the family we choose

In her new memoir, This Is Happy, Gibb delves into her painful past. We spoke to the author about carrying on after great loss. 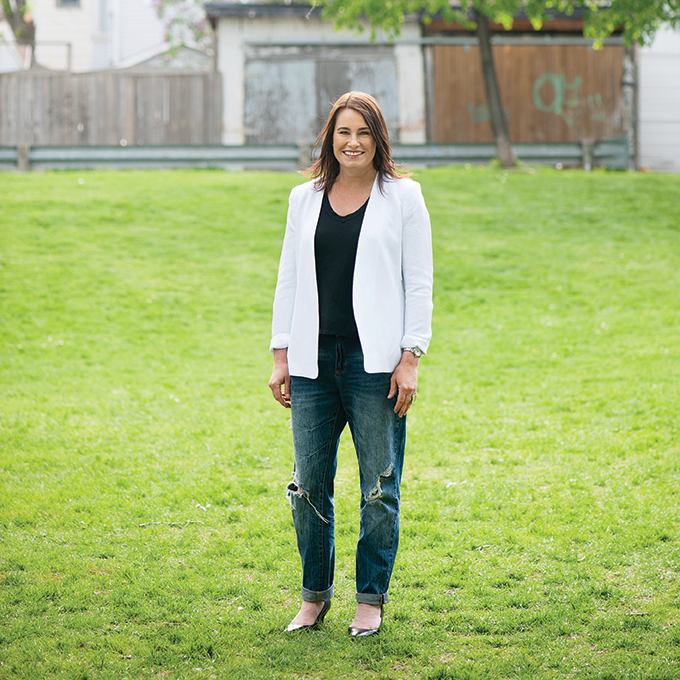 Five years ago, just shy of her 42nd birthday, Camilla Gibb spent a small fortune on a box of line-caught sea bass. It was winter and she was eight weeks pregnant, envisioning cozy backyard barbecues with family and friends — a rich, settled, ordinary life. And then her spouse, Anna,* came home to declare their marriage over and unceremoniously wrenched that life away.

This Is Happy, Gibb’s raw and bracingly candid memoir, is a story first told in fragments, tracing her rootless childhood, her volatile father and her recurrent struggles with mental health. Halfway through, it transforms into a story about what Gibb builds from the pieces of her marriage. After the separation, she finds a new place to live — a dingy east-end Toronto house with a pronounced lean and a bit of extra space, which suits her fine. Slowly, new residents begin to trickle in: There’s a spirited nanny who helps care for the baby and phones her husband in the Philippines every night. There’s a lonely grad student from the East Coast who longs for her parents and her Maritime food. And then there’s Gibb’s own brother, trying hard to resist the lure of another drink. Their isolation draws them together, but so does their love for the author’s little girl.

“I never expected to be happy, to have a sense of belonging somewhere,” Gibb writes at the beginning of this book — yet all of a sudden, without her quite noticing, she sort of is, and she kind of does. Here, the Giller-nominated novelist reflects on loss, solace and carrying on.

At the precise age of 36 years and four months, you suddenly decided you wanted to have a child. How did you come to that decision? I woke up one morning with this incomprehensible feeling of grief and absence. It was physical and total. And it just came out of my mouth: “I want a baby.” I was quite stunned. I didn’t know, until the words came out, what the feeling was about. I’d never felt it before; I’d never known I would feel it. I burst into tears, and, once those subsided, I could have a reasonable conversation with my partner about what we were going to do and how we were going to do it.

You did get pregnant, and pregnant again after a miscarriage, and then very abruptly your relationship was over. What happened in the immediate days that followed? I can only call it terror. There was no thought. There was only feeling. My primary concern became whether what I was experiencing would negatively affect my baby. I knew that maternal stress, particularly high levels of cortisol, could affect fetal development. I was so afraid that I was damaging my baby. I went and spoke to a social worker I knew, who told me that (a) [the fetus] is a parasite (all it needs is your blood), and (b) there were perfectly healthy babies born in concentration camps. That was sobering.

Who did you rely on during that time? I had solid support from my closest friends, Vibika and Diana, and a lot of practical support from other women. But I was emotionally unreachable by anyone, with the exception of my cousin Tami, in England, who called me every day for months. She just listened and somehow knew where I was and what to say and not say. Her calls were a lifeline.

Much of what you untangle here — grief, alienation, belonging, empathy — are experiences that are hard to capture in words. How did you find language for them? Sometimes it’s a metaphor. I thought about those dark days after I’d given birth, when I felt a complete sense of detachment from my surroundings. How do I evoke that experience? I realized that it was like being down a well, with voices going overtop. And that really helps, because with some of these things, there isn’t literal language for them. But you find the right metaphor, and that allows you to build on it.

How has your definition of a family changed since your daughter was born? Intellectually, I knew that it was possible to construct a family out of unrelated people, but what I discovered, perhaps, is that family is a feeling between people more than it is an arrangement. There’s been immense beauty and surprise in my family. It has an integrity, in part because it is carefully selected and constructed.

Why do you think the four of you ended up together in that house? We’d all been broken by life in some way, and we accepted each other’s pain as part of who each of us were. We belonged together for a time; we looked after each other in practical and emotional ways. There was something healing in that, and, bittersweetly, the healing probably gave us the strength to venture out into the world again.

You write that it’s our job to tell stories that make us knowable to others, especially to our children. Why is that so crucial? I didn’t grow up in a house where people told stories or shared much about their own experiences. We are like icebergs: Nine-tenths of us is beneath the surface, and if that stuff doesn’t get revealed to children as they’re growing up, how isolated will they feel? It’s important that my daughter see all the moods I’m capable of. Very early on, I wanted to give her language for feelings. And now she can tell me, “I feel embarrassed” and she knows she’s not alone and her feelings are legitimate.

In the middle of a god-awful experience, some people tend to resist any potential opportunity for learning. But removed from the breakup by several years, what do you take from that time? I don’t know if I’m far enough removed from it to have come to any conclusions. The grief, for me, is immeasurable. Somebody else might have gotten through this more easily. Where does it come from? The [book] provides a way [for me] to understand the magnitude of the experience, rather than punish myself by constantly saying, Get the f–k over it. Shouldn’t you be done by now? Why aren’t you in a new relationship? That’s kind of an unsustainable way to live. Out of this mess, there is this unlikely, beautiful, crazy family, and I am grateful for that. But I wouldn’t say there was anything redeeming about that experience. I didn’t need to be tested and challenged in those ways. I don’t think anybody does.

Your memoir is a profound reflection on loss. Why call it This Is Happy? I think, ultimately, what I came to realize is that happiness coexists with immense pain. Perhaps you can’t even understand happiness unless you understand pain. You can’t separate them. And it is possible to feel all these things simultaneously.

Is our definition of happiness too narrow, then? I don’t even think we’ve defined it. You know it in a moment, but how frequent are those moments? Is it noble to be happy? I don’t think so. Is it superficial? Probably. But did I grow up a bit cynical? Yeah.

We all have moments that seem inconsequential at the time but end up haunting us. You write about how humiliating it was to buy all that sea bass. Even now, it makes me well up. It’s such an innocent gesture, full of blind faith that this life carries on with fabulous dinner parties in this fabulous house, and I couldn’t have been more wrong. It’s the excruciating lack of awareness on my part. All my hope, my optimism, my fantasies, all the uneaten dinners — my entire future was in that sea bass, and I couldn’t have been more wrong.

But that’s where metaphor isn’t consoling. It’s paralyzing because you invest it with so much meaning, and then you can’t just order fish. I’ve never had sea bass since.

See, and it’s delicious. You should immediately have a triumphant sea bass dinner with your family. Everyone eating sea bass. Fantastically expensive sea bass. Line-caught.

Other Chatelaine Q&As:
Judy Blume on confessions, catharsis and coming of age
Writer Meghan Daum on childlessness, selfishness and living the life you want