Birdwatching Is The *Best.* Here’s How To Get Started 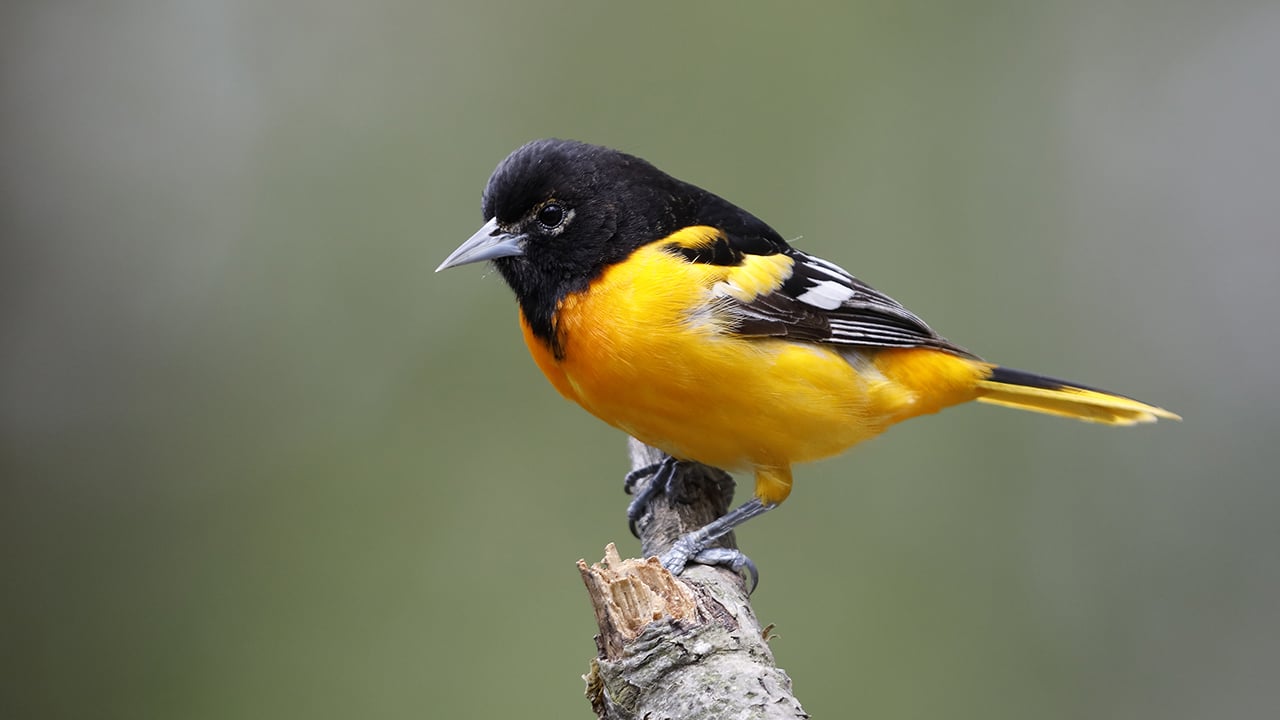 Seeing certain kinds of birds, for me, provokes a rare emotion: awe. Out for a bike ride the other morning, I saw a Baltimore oriole singing by Lake Ontario. If you only know orioles as a cartoon baseball team logo, the actual birds are a gorgeous surprise: incandescently hued, with a “rich, whistling song” that made me jump off my bike and beckon excitedly to the runners on the trail behind me. I couldn’t believe it when they ran past without stopping—it was this tiny shiver of beauty, just…there, in a tree, for anyone to look at. For free!

The lockdown has meant I’ve had more time for my long-neglected, extremely unskilled love of birdwatching. My makeshift desk looks out on my tiny east-end Toronto backyard, where I’ve seen black-throated blue warblers, hermit thrushes, rose-breasted grosbeaks, ruby-crowned kinglets, and many other avian friends. (And, dear neighbours—I swear, the binoculars are for the birds.)

And I’m not the only one: anecdotally, there’s been a surge of interest in birdwatching. I’m not surprised, and I can’t recommend birding enough—it’s a great way to get outside and close to nature, and the closest my racing brain gets to mindfulness.

Plus, spring is an excellent time to start birdwatching. According to Emily Rondel, the president of the Toronto Ornithological Club, spring migration is “prime time” for birds in Canada—when you can see the highest diversity of species. Birds are decked out in their breeding plumages, looking their best—and singing their brains out.

So, if you’d like to take up birdwatching, or get better at it, Rondel gave me some tips.

Where—and how—should you look for birds?

“People often think they need to go to pristine places to see birds, or, say, go to Point Pelee, which is kind of the mecca of birding in Ontario. But they can see almost as many birds just by staying close to home. For example, your backyard would have a surprising diversity of bird species. And even if you don’t have a yard or you live in an urban centre, just taking a walk around your block can yield a lot more sightings than people think. Start by looking for movement, in places like the canopies of trees. I think a lot of people don’t realize how small [some] birds are, so calibrating your brain and your eyes to look up high and for small movements. Birding by ear, [or listening for birds’ songs, then looking for the birds themselves,] is also a great place to start.” 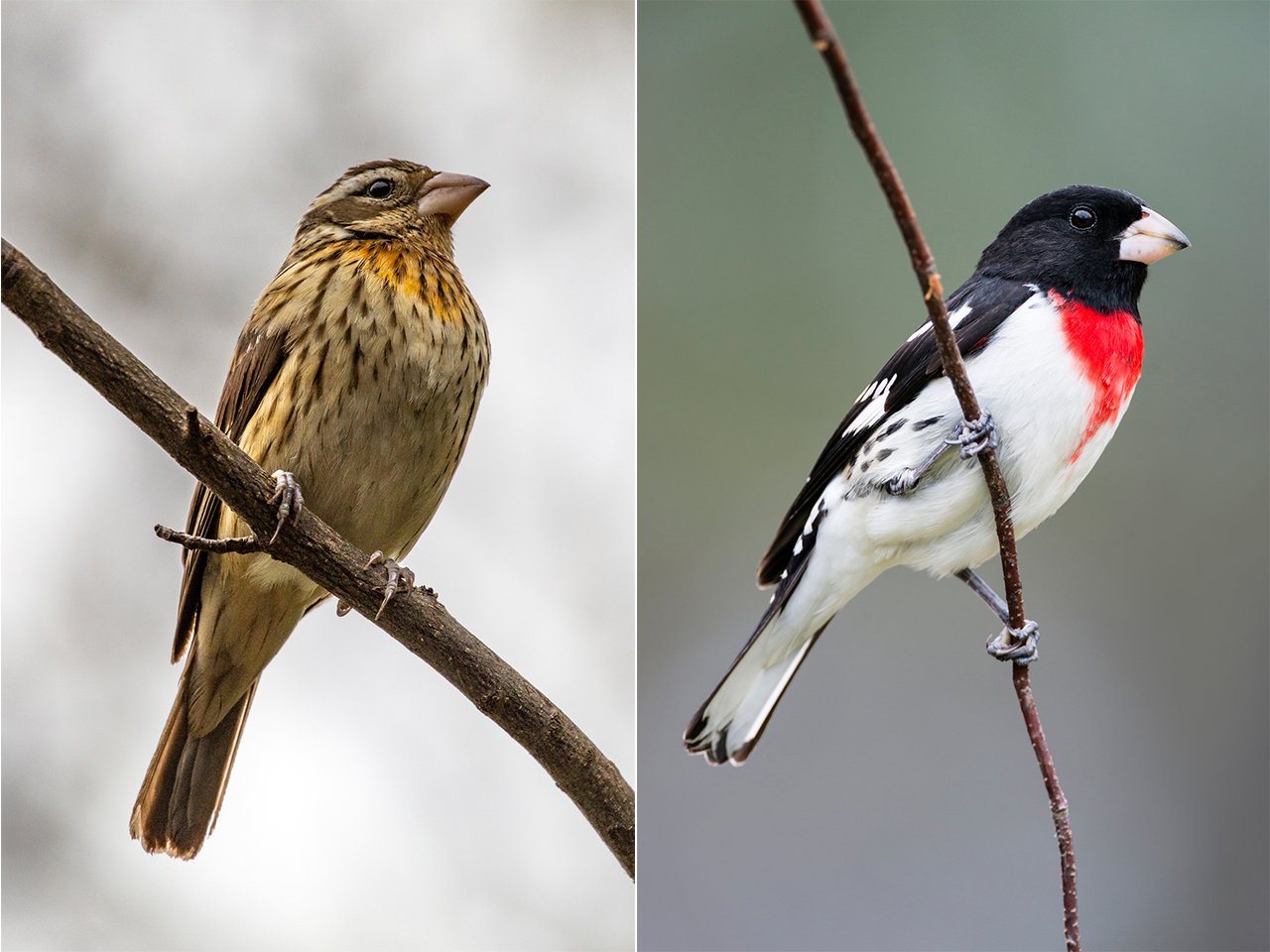 Left, a female rose-breasted grosbeak; right, a male. It’s a bird common in most of Canada. (Photos: iStock)

“If you don’t know what you’re looking at and need guidance, the first place that I would recommend is Merlin, a free app that’s put out by the The Cornell Lab of Ornithology—obviously, Merlin is a wizard, but it’s also a type of bird. Merlin guides people through a really simple series of five questions—where and when you saw the bird, its size and colour, and what it was doing when you saw it. (Was it in a tree? At a feeder?). It then generates a list of what you likely saw. Merlin is based on citizen science data, too. So they have millions of birdwatchers’ records for a given area at that date, and use it to put a list of the usual suspects together. It’s really, shockingly accurate.”

[Gillian’s note: I’d been using an ancient field guide, and tried Merlin instead, and it’s great and super easy to use, but be sure to scroll sideways on the images presented if you don’t see a likely candidate, because with many species the males and females look completely different. I felt silly recently because I was stumped by a female rose-breasted grosbeak, a bird I thought I knew well—but only in its bright, easier-to-identity male incarnation.]

“If you have a photograph of the bird, you can try Seek by iNaturalist, another free app. It uses photo recognition to tell you what you likely saw.”

How can you get started birding by ear—that is, identifying birds by their songs?

“If you learn even two or three of the basic songs and calls of the regular birds in your neighbourhood, already taking a walk around the block is suddenly a more rewarding experience. In Ontario, cardinals are really loud—and really distinctive. Robins start out morning choruses; they also sing at dusk—kind of a twilight song. So almost everybody has heard a robin doing these kind of sing-song calls, even if they don’t know what it is. And the red-eyed vireo is a bird that everyone hears, but it’s fairly hard for beginner bird watchers to see. But its sound is something that is part of almost every Ontario landscape. And then, if you live in a city, something like a chimney swift—those are birds that are really easy to see and hear even without any binoculars or cameras or anything because they’re always flying overhead and because of their distinctive chittering noise.

When you identify a bird, you can then listen to what it sounds like. [Merlin includes bird songs.] So, you can do it through trial and error, but there’s also separate bird song training apps. I also like Larkwire a lot—it’s kind of a game, but it’s a game based on helping you identify or become comfortable with bird songs and calls.”

[Gillian’s note: I’d had trouble identifying birds by ear, but I got the iOs app for Larkwire after Emily’s recommendation, and it’s helped tremendously. The first course on backyard birds is free, and will teach you how to distinguish robins, cardinals and many more commonly heard birds.]

Do you need binoculars or a camera—and what are the best kind to get?

“I have an okay camera, a little Canon that doesn’t have an amazing lens, but the photos do help identify birds. You don’t even need a telephoto lens. And I don’t want to say that any equipment is absolutely necessary, but I would say that the whole world opens up to you the moment you learn to use binoculars and look at a bird through them—you can suddenly see the bird in detail and colour. [You can get them secondhand for sure,] but they are a great investment because when you have a great pair of binoculars, you can keep them for 20 years and they’ll work just as well on that last day as the first.

When it comes to magnification, more isn’t necessarily better—it’s actually really hard to orient yourself looking at trees and branches when you magnify too much. So, a really good ballpark is an 8 factor of magnification—I think that’s ideal, and I wouldn’t go past 10.” 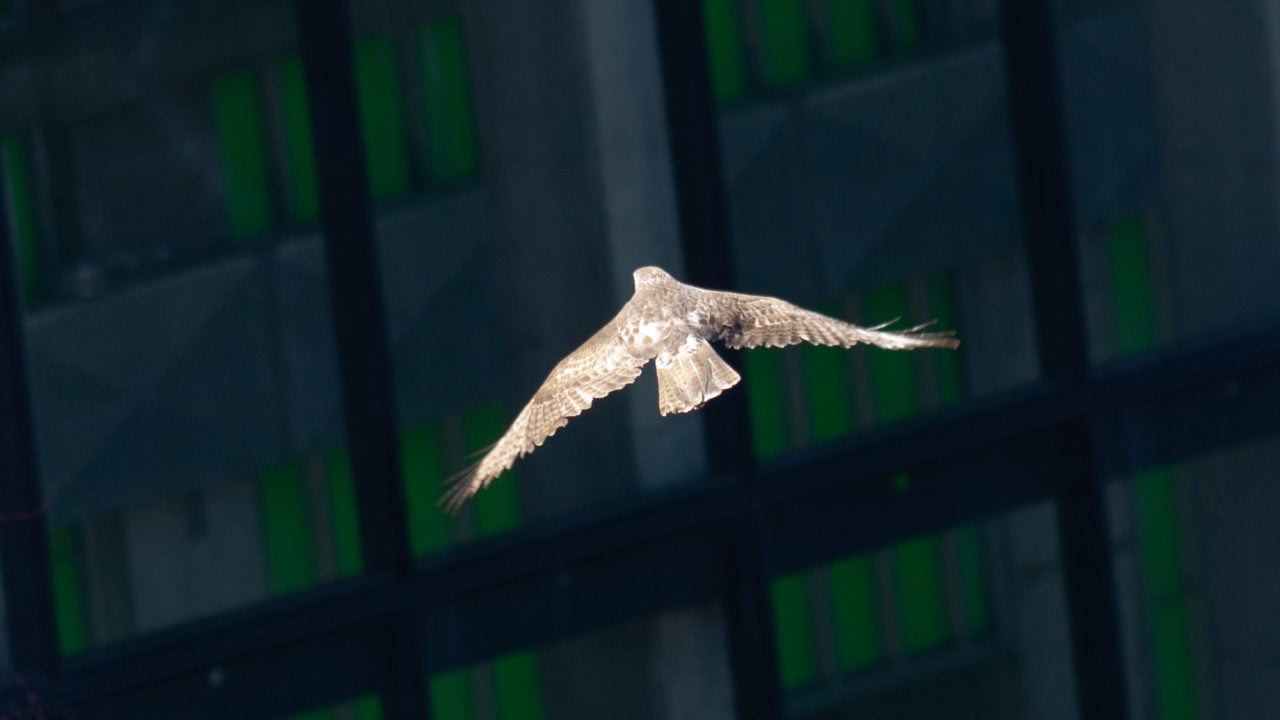 My colleague Joe Rayment took this photo of a young red-tailed hawk from the window of his downtown Toronto condo. (Photo: Joe Rayment)

What about if you live in a city and want to watch birds?

“I live in downtown Toronto, and I still see a ton of birds in my neighbourhood. I don’t have a green space attached to my home, and I have over 50 birds on my “yard list”—and that’s just a tiny patio in an urban centre. You’d be shocked how much you can find, just by spending as much time as you can looking—even from a city balcony.”

Are you seeing more people interested in birding right now?

“I mean, it’s anecdotal—but definitely. I’m on a number of forums on places like Facebook or Discord, or even Twitter, and you see a ton of people who have the same story—I started to suddenly find the birds on my street interesting, I’m curious about this bird, I want to buy a bird feeder. I see this enormous uptick.”

“I mean, this is speculative—but we’re in a time where people are kind of shaken and kind of nervous, and there’s a real restorative aspect to nature—it just makes us feel better. We know that through all sorts of studies, and birds are the most accessible part of nature to a lot of people—plants and birds, honestly.” 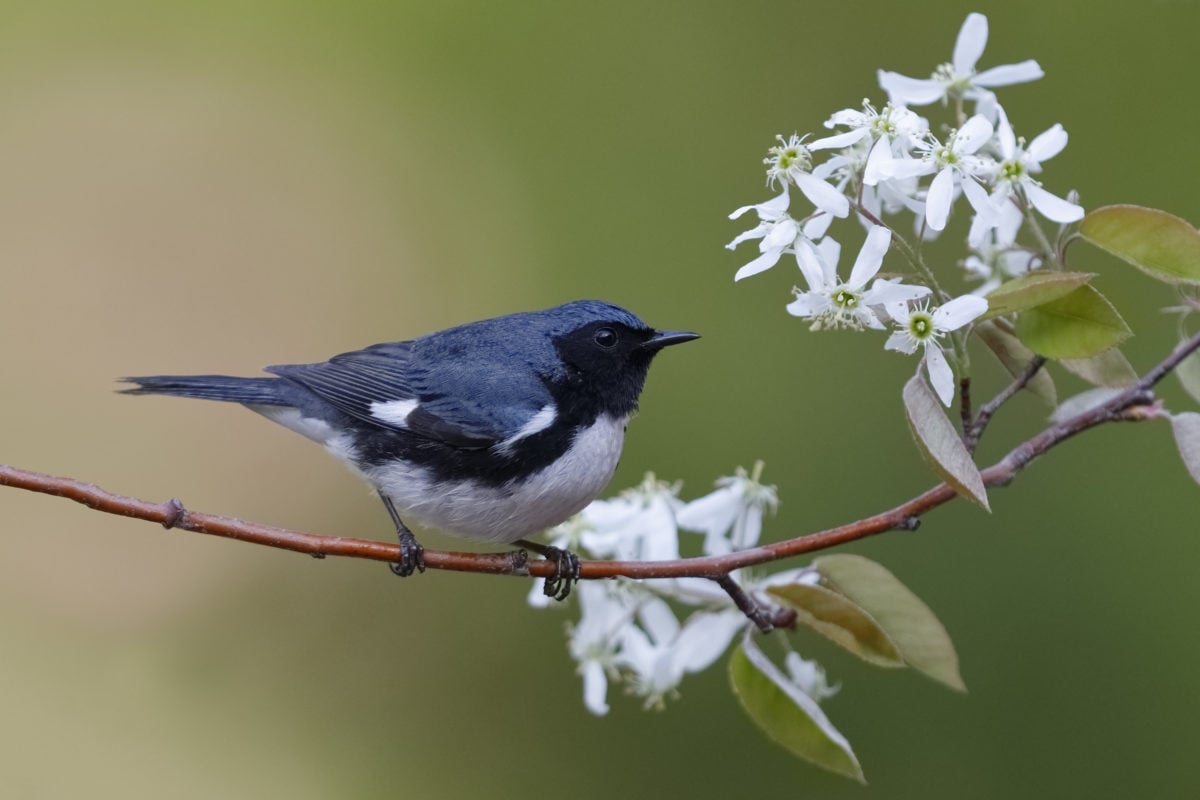 A male black-throated blue warbler perched on a serviceberry branch. I was pretty jazzed to see one of these guys in my small Toronto backyard. (Photo: iStock)

Why do you love birdwatching?

“Part of what I like about birdwatching is that it takes all my attention in that moment—so it’s almost meditative. You’re totally focused—your ears, your eyes, everything about you is focused on these other creatures. I think that’s part of why people find it so calming—it takes your whole self to do. The same reason people do yoga and meditate. And you get out of your own head for a while—but in this case, you’re just doing it through birds.”

If you love birds, what else can you do to help them?

“The two main cases of death to birds: [one is] outdoor cats. So, keep your cats inside, number one, I keep my cat inside and she doesn’t like it—but it’s worth it.

And then [the second major cause of death is] collisions with structures—birds hitting glass is a highly publicized thing, especially during migration right now. But I think most people think of that problem as happening at office towers, big buildings. But there are so many more houses and small residential buildings than there are skyscrapers, that houses overall are killing more birds. And it’s really a preventable thing—you can put tape on your windows, or little dots or decals, or even dab the outside of windows with washable markers, and then wash it off later. This is a really solvable problem.”

I noticed you say birding and not birdwatching—is one cooler to say than the other?

“There are purists who may have different specific definitions, like birdwatching is maybe more casual, and birding is maybe more focussed and you’re out to find all the birds you can. I acknowledge that people will have opinions on that, but I see them as totally interchangeable. I’ve gotten into the habit of saying birding, because a lot of the people I know who are really into birds use that term themselves.”

This interview has been edited and condensed. Here’s more on how to keep birds from hitting your windows and more on why you should keep cats indoors.

Love birds? Here are more ways to help them