What A Skeptic Learned From Visiting An Astrologer

It helped me see horoscopes in a totally different way. 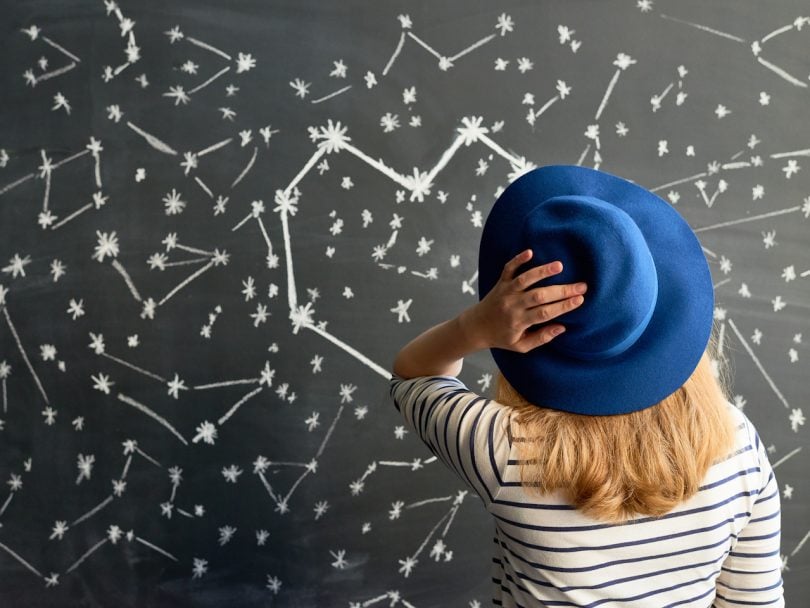 My work wife is an Aquarius. I know this because of the horoscope app that sends daily alerts to her iPhone. It blinks beside my desk, dispensing vague platitudes. Wanda infuses them with meaning, earnestly identifying with her free-spirited zodiac sign. After a recent breakup, she blamed celestial incompatibility. “He’s a Virgo,” she said. “It was doomed from the start.” (I was almost sure she was joking.)

As a child of the 90s, I cut my paranormal teeth watching The X-Files and summoning spirits with the Ouija board my parents got me from Toys R Us. Horoscopes seemed similar, something teenagers grow out of along with the fear of being abducted by little grey aliens. At least, that’s what happened for me. As I got older, the supernatural world lost its lustre—a system that lets some unseen force determine my fate? No, thank you. Free will is much more appealing.

But astrology’s popularity has soared in recent years. Co-Star, the app Wanda uses to get her digital horoscope, is just one among a constellation of apps cashing in, securing US$5 million in venture capital funding and six million downloads. The entire mystical services market is worth US$2.2 billion annually in the U.S. alone. Meme accounts like @notallgeminis amass hundreds of thousands of followers, and a barrage of online articles will tell you what you should choose based on your sign, from cocktail recipes to dog breeds. Astrology is even making its way into therapy. A recent New York Times story tracked a trend in clients asking their psychologists about Mercury in retrograde, causing social scientists to brush up on the zodiac.

Astrology is popping up in our social feeds, in our drinks, and on therapists’ couches. With superstition taking over popular culture, I felt compelled to suss it out. On a whim, I decide that Wanda and I should map our astrological charts. That way, if there was anything to these divine diagnostics, I’d see it.

I sent our birth information to Jennifer Fukushima, certified astrologer and president of Astrology Toronto. Fukushima left a career in ethical fashion to study astrology and psychotherapy, which seemed like well-rounded pursuits. Over email, I liked her instantly. But on the day of our reading, I was irrationally nervous. Anxiety mounted as Wanda and I prepared to let a stranger dissect our personalities, forecast phases of our lives and tell us whether or not we were compatible, astrologically speaking. It was possible that our work matrimony was doomed to implode like a dying star, and I worried that Wanda would take this information to heart. Suddenly, it seemed unwise to take something we disagree about and make it the nucleus of an intrusive personal assessment. But when Fukushima greeted us warmly in the small office she rents in a Toronto naturopath clinic, it pulled me from my anxious haze. The décor helped, too—I had expected beaded curtains and incense. I got Scandinavian minimalism.

Humans have been mapping patterns in the sky for centuries. Ancient Babylonians first carved up the heavens into the Western zodiac we recognize today. Astrology was once a vital part of Western European culture, considered a science with the same integrity as astronomy. The stars were consulted for political advisement and medical diagnostics. But then, when telescopes had scientists viewing those stars up close around the 17th century, they found the constellations didn’t resemble horned animals, among other discrepancies. Astrology fell into disrepute until the early 20th century revived mysticism. Newspaper horoscopes arrived soon after, with the first attributed to British astrologer R.H. Naylor. More recently, decades of studies have tested horoscope predictions and zodiac signs as they relate to life events and personality traits, finding no empirical evidence to verify them.

But, “humans are not necessarily rational consumers of information,” says David Hauser, a professor of social-personality psychology at Queen’s University. Hauser files astrology and horoscopes under “belief-based reasoning,” a tendency to ascribe more meaning to things we hold true. In other words, if you already identify with your sign, you’re more likely to see its traits in your behaviour. Astrology is no longer considered a science, but does that mean it has no value at all?

Back in Fukushima’s office, Wanda and I sat in Ikea chairs, huddled over an iPad. My natal chart is on the screen, but I’m struggling to relate to what I’m seeing. Natal charts are snapshots of the sky relative to Earth at our exact time and place of birth, capturing the position of the planets and the zodiac constellations. If horoscopes hint at our daily happenings, natal charts sequence our celestial DNA, mapping the heavenly bodies within 12 houses, which represent different aspects of the human experience. Fukushima explained that, while I’m a Taurus, the stubborn bull, every sign and planetary orbit leaves its mark on us. That’s why my chart was laid out in a circle divided into 12 slices, some containing clusters of hieroglyphic symbols.


Nerves aside, I’d expected to easily maintain my skeptical nature. But Fukushima doesn’t strike me as a charlatan grasping at connections, and my radar for the TV psychic method had been primed. Her insights seem genuine, and some are truly affecting.

“Uranus causes restlessness,” Fukushima explains as she notes the planet’s current trajectory. “Maybe you’ve been craving new experiences…?” I think about my recent forays into guided mediation, Krav Maga and now astrology. Fukushima is subdued and unassuming, which makes her uncanny assessments of my personal life a bit easier to digest. I’ll be reaching my progressed moon phase next year, she says, which typically brings crisis and a sense of urgency. By then I’ll be 37, so I can add natal lunar phases to the list of looming environmental pressures to produce children. My natal architecture also lends me a deep appreciation for refinement, which I concede, and which Wanda affectionately calls “pretentious,” prompting laughter from all three of us.

When Wanda wants to talk about her love life, Fukushima perks up. But she consults Wanda’s chart and her face softens. “It’s a really tough time right now… is it?”

Wanda looks her in the eye, “How did you know that?”

I know she’s thinking about her ex, the Virgo. Pluto is transiting Wanda’s moon, which indicates a significant happening. Fukushima asks if a relationship ended recently and Wanda wants to know how much longer the dwarf planet will be sticking around.

Fukushima takes the responsibility of parsing people’s lives very seriously, and her studies in psychotherapy are a means to help her clients through difficult transitions. “The people who come to me really need a reading,” she says. They need validation or closure. And the rest? “Most people don’t know that much about astrology.” Skeptics especially tend to conflate astrology with horoscopes, which is just one aspect of the practice, the most easily monetized and therefore the most heavily criticized. Natal charts and synastry readings, which compare charts, are much more intricate. In the West, we’ve mostly reduced astrology to a Buzzfeed quiz. But in India, for instance, astrologers are still commonly consulted to match potential partners for marriage.

Just as I feared, Wanda and I have many “challenging aspects,” the angles formed between planets when our charts are overlaid. My Venus opposes Wanda’s Venus, which indicates different values. The position of my moon relative to Wanda’s sun can cause conflict and competition. But we also have supportive aspects. A kind of mathematical average of our two charts puts Saturn in our eighth house, a placement associated with deep bonds. “You might remind each other of a sibling,” Fukushima says, “or someone you knew in the past.” Wanda looks at me earnestly. She has told me on several occasions that I remind her of her sister, someone she’s always looked up to. Now, she seems pleased by this validation: “You’re like my older sister at work!” she says.

I can’t think of a single reason to doubt her.

As we leave Fukushima’s office, I’m torn. On one hand, our collective allegiance to science feels pretty crucial right now. As personal beliefs create greater divides, there should be facts we can all agree on, like gravity (or climate change). On the other hand, choosing fate, especially in times of uncertainty, has a separate appeal. Astrology’s latest renaissance is often blamed on rudderless millennials and our need for a compass, on political instability, or on the internet. But isn’t it possible that belief is less important than the need to feel connected, stable, significant?

Maybe astrology is less of a slight against reason and more like nostalgia for a time when we took it for granted that our lives were written in the stars. Our desire to be part of something—a cosmos that leaves its fingerprints on us, a tool to discuss our personal quirks without judgement, or an office matrimony that could implode at any moment—will always be stronger than our need to be logical. Even for me.