What I Learned From Anthony Bourdain

A new documentary about Bourdain explores how he came to be the person he was—something I’ve been trying to understand since he died. 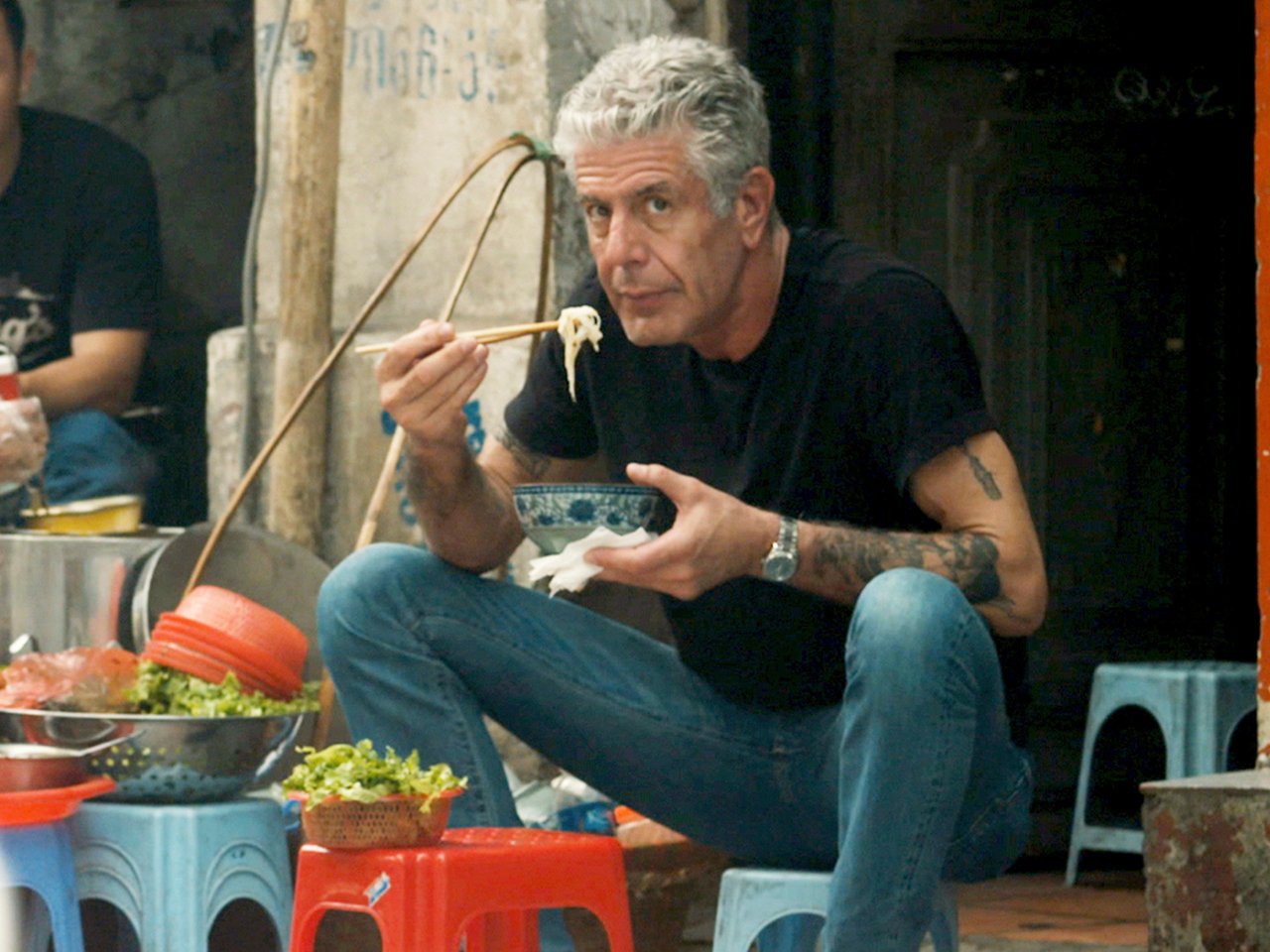 I never got a chance to meet Anthony Bourdain, but somehow it always felt like I knew him. This is cliché to admit, an obvious recollection of the internationally beloved chef, writer and television host who took so many of us around the world. His distinct charisma, arsenal of quips and poetic odes to the people and places he traveled to were Bourdain trademarks. Maybe it’s trite to say that someone who had been on the small screen for as long as I can remember felt like a dear friend, and someone whose death I mourned as such—but in this instance, such a proclamation (by me, anyway) is rare. And I can’t especially say I’ve ever yearned for any white man to introduce me to the foods and cultures of countries who are still struggling to overcome the damage done to them by white men of yore. But that was the remarkable thing about Anthony Bourdain—he was and continues to be the only white guy all the people of colour in my personal and internet circles would co-sign, a decidedly scarce honour. We all wanted him to visit our motherlands, we yearned to see our cuisine and traditions through his eyes.

When I heard about Bourdain’s death, I immediately felt an all-encompassing loss. It made me take stock of my mental health, a depression I knew I had for so long but had always been too scared to confirm with a doctor. (I eventually did.) I was an ardent fan during Bourdain’s life, but in his death I found myself consumed with him. I read his memoirs, watched his shows, studied every tribute I could find online from people who genuinely knew him. I wanted to know how Bourdain came to be the person he was.

As it turns out, this is the same question the soon-to-be released documentary about Bourdain’s life, Roadrunner: A Film About Anthony Bourdain, aims to answer. Premiering July 16 in theatres and directed by Oscar-winning Morgan Neville (Won’t You Be My Neighbor?, 20 Feet From Stardom), the nearly two-hour film starts in 1999, with a 40-something Bourdain in the midst of writing his first book, Kitchen Confidential: Adventures in the Culinary Underbelly, while serving as executive chef at Brasserie Les Halles in New York. This book, based on an essay he wrote for the New Yorker, catapulted him to fame. The documentary is guided largely by interviews from Bourdain’s inner circle, from culinary peers, fellow writers to friends and family. What you get is a comprehensive look at his life, relayed by those who had access to various parts of his mind. But what adds a particular texture are the insights shared by Bourdain’s television crew. Arguably the people who knew him best are the ones who traveled with him for most of the year and spent every day with him as he filmed.

What you learn through the course of the documentary are the numerous ways in which he grew without ever really losing his brazen, contrarian essence. There is ample footage of a younger Bourdain talking about his disdain for television—“If I ever do TV, shoot me,” he tells a friend. He was convinced to film A Cook’s Tour by the promise of traveling the world, something he hadn’t done much of before. We witness the somewhat awkward beginnings, where he had to transition from a shy introvert into a compelling host.

Bourdain became wildly famous from his various TV shows, first A Cook’s Tour, then No Reservations, The Layover and finally Parts Unknown. The film implies Bourdain really came into himself while visiting Vietnam, a place he loved and would visit many times. But one thing you do see change is the language he uses. At first, he spoke about countries on the other side of the continent as exotic and otherworldly—terminology that evoked orientalism. This is common behaviour for white travellers, and it’s a problem because it reduces other people’s lives to recreational experiences. It shows that tourists from the West, particularly white tourists, are unable to consider the realities, customs and traditions of these countries as valid and as relevant as their own.

But Bourdain evolved, and his ability to connect and show genuine respect for the places he visited set a precedent. While food was his storytelling medium of choice, it became clear that it was always about so much more than that. Bourdain brought context—he talked about history, war, economic issues, political strife. But he also talked about beauty, culture, community and the fantastic foods prepared for the kitchen table or the hands of busy residents on their way home from work. For many who come from countries often mischaracterized by Western media, this mindfulness meant a lot. This was particularly exemplified in an episode from 2013, when he and his crew famously visited Palestine and Israel. He was shocked by what he saw, stating Israeli settlers who moved to the West Bank since 1967 are “all in contravention of international law.” In a tribute post following his death, Laila El-Haddad, a Palestinian journalist featured in the episode, revealed Bourdain once confided in her that it almost didn’t air. He told her they “fought like hell” to tell the stories they did. And—when Muslim Public Affairs Council recognized him as a “voice of courage and conscience” in 2014—in classic Bourdain fashion, he accepted the award humbly, saying his work involved very little courage and an ordinary amount of conscience. He went on to explain that Parts Unknown simply did what they always do: show regular people doing everyday things. “The world has visited many terrible things on the Palestinian people, none more shameful than robbing them of their basic humanity,” he said, adding that episode was, a “small, pathetically small, attempt at understanding.”

In some ways, Roadrunner is also a small, though admirable, attempt at understanding the complexities of Bourdain’s mind. The film offers a nuanced view of his troubles, using his own voice and footage to guide the narrative through particularly difficult chapters. This includes his experience of seeing and being in close proximity to so much—his shows took him to more than 80 countries—which meant contending with injustices everywhere he went. Restaurateur and fellow TV personality David Chang puts it succinctly in the documentary, “There’s suffering in this world and that seems to be omnipresent. How do you spend time with people and empathize with their plight, how does it not change you fundamentally?”

Maybe Bourdain was able to relate to the stories of those historically excluded and marginalized because he considered himself to be on the outs of society, albeit in a different way. In Medium Raw: A Bloody Valentine to the World of Food and the People Who Cook, his sequel to Kitchen Confidential, he writes about being a chef, “We knew we were misfits, we sensed the empty parts of our souls, the missing parts of our personalities, and this was what had brought us to our profession, had made us what we were.” David Choe, artist and friend, offers a compelling explanation in the film: something fundamental in Bourdain led him to exploring certain paths. “People forget he was a junkie,” Choe says of him, noting that after Bourdain recovered from addictions to heroin and crack cocaine, the addictive nature of his personality jumped. In place of drugs, it was work, or relationships, or hobbies like jiu-jitsu. You get the sense he was always on the move, always searching.

While I’d like to claim my interest in Bourdain was solely as a fellow storyteller and writer, that would be a lie. I identified with Bourdain in many—and not necessarily healthy—ways. My spiralling after his death proved such a hurdle for me to overcome, I started talking about him in therapy. I told my psychiatrist I didn’t know why I identified with someone who I had very little common with on the surface—after all, this was a professional chef, a white man who said what he wanted and made his living travelling the world. Except I did know why, something my therapist was keen to point out: that eternal searching, the inability to be present, the guilt of feeling so empty despite having many privileges—all these things I gathered from his writings and recollections. The depression, crankiness, dark humour, perpetually unsatisfied nature, and still, his romanticism about life and the capacity to hold room for others made me feel like I wasn’t doomed. Someone shared the parts of myself I deemed undesirable, at least to my own interpretations, and they were one of the most successful and beloved people in the world. It’s a widely held belief, that of the tortured artist. Great art coming from a place of suffering is a notion that’s been around for ages. I identified with this idea as a writer, but I also found it to be dangerous. On one hand, it ensures the artist is always able to draw from a place of adversity and relate to humanity on a deeper level. On the other hand, it means the artist will likely live their entire life in pain.

I admit, I’ve been afraid to talk about Bourdain because it’s not lost on me that you can’t talk about his life without also acknowledging the way in which he left it—by suicide. I want to focus on everything beautiful he’s given us, but a person’s life is a compilation of everything that happened from the first breath to the last. In Roadrunner, Choe says Bourdain wrote to him towards the end of his life and admitted he was depressed. “My life is sort of shit now,” said Bourdain, as his voice in the film is overlaid on top of Choe’s, who reads the email. “You’re successful, and I’m successful, and I’m wondering, are you happy?”

None of us will ever know what Bourdain was thinking leading up to those final moments. It was a tragic and hurtful end to a life led by an incredible man. I can’t imagine what it feels like for those who knew him as Tony. But watching them talk about his death, lamenting how he would’ve loved to see his daughter now, their sadness and anger and disappointment palpable, brought me such immense grief I had to hit pause and take a walk. The film emphasizes that Bourdain’s legacy shouldn’t be that he succumbed to darkness—it should be that he created something important. Something that will live on. Roadrunner clearly learns from and internalizes Bourdain’s greatest asset: honouring the subject. Personally, I think his legacy also involves the profound necessity of asking for help and genuinely being willing to accept it. Choe wrote in an Instagram tribute that while Bourdain had explored many paths, he hadn’t traversed that of his own heart. I believe his legacy includes identifying our individual pain, taking the time to show ourselves the same grace we show to others. Bourdain was loved, he remains loved, and the world was better with him here.

And with all the other things he taught us along the way, about getting out of our comfort zones and seeing the world, being open minded and openhearted to things unknown, this lesson taught at the end should be heeded just the same: the world is better with us here.