A Word From Your Coffee(s)

Did you hear that? Your coffee appears to be talking. 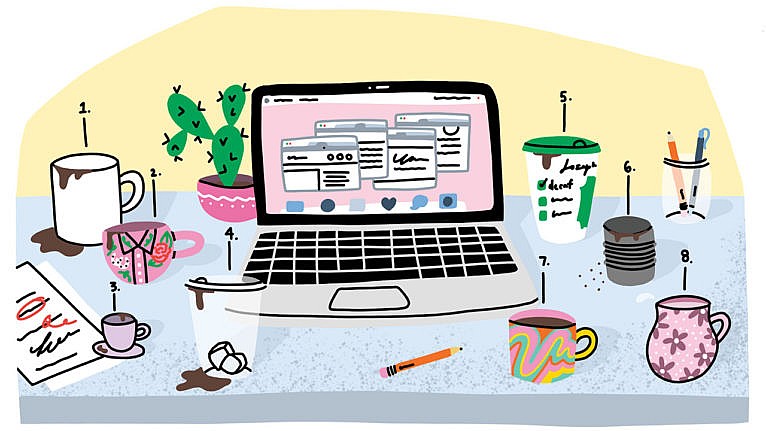 In COVID times, one thing is certain: We need coffee. Whether you sip it slowly, chug it down, or drink half then forget about it, make more an hour later and end up with a half-cup army scattered throughout your home, coffee has become an essential part of you. And…wait. Did you hear that? Your coffee appears to be talking.

Good morning, friend! Breathe in deep and take a sip. Ahhhh. Look at you, waking up.

Hi, sugar, I’m your second cup. Joe’s nice and all, but I’m the one who truly perks you up. There’s a reason Dolly Parton wrote that song about me. I fill you with the rush you need to really start working—or at least attempt to. The trying is what counts.

Ciao! I’m coffee number 3. Make me with a plug-in, a percolator, whatever! In my heart, I am an espresso, full of flavour and feelings. Drink me at 11 a.m.; I’m a nice, quick tazza to get you to lunch. But, I beg of you, do not put milk in me. Only teenagers and Starbucks promote such blasphemy after 10 a.m. I encourage you to take a little passeggiata after you drink me. Wave at your neighbours, smile with your eyes, sing “’O Sole Mio” to a cat. Use the jolt of LIFE I give you!

I’m walking here. Keep up! You’ve had four cups of coffee and you don’t need anyone wasting your time. Maybe a deadline looms? Maybe you can’t keep your eyes open because you woke up at 2 a.m., read the news on your phone and went on to have nightmares about various global crises? I’m not here to judge. I love you. I AM you, from .05 seconds in the future. I’m a little ahead, which might make you feel like you’re losing your mind, but I’m worth it. I’m a cold brew, obviously.

I’m . . . decaf. You can’t tell though, right? Oh, stop yawning, faker. You want to give yourself a panic attack with all that caffeine? It’s 3 p.m.—time for a break anyway. Do some chair stretches. Eat a snack. Drinking decaf during a pandemic is basically like doing a mindfulness meditation sesh.

Why stress about the state of the world when you can play Call of Duty (or, ahem, Animal Crossing), on your handheld while sitting on the toilet? No shame in that game. I’m downright gritty. In fact, the best way to make me is in a tin can with some actual coffee grounds stirred in instead of sugar. You’re probably running to the toilet every hour at this point, and that is dedication. Here’s a tip: used coffee filters are a G.I. Joe-approved substitute for toilet paper. Now you know, and knowing is half the battle!

You’re about to ascend to another plane of existence known as Cup Seventh Heaven. It’s nice here, if you’re into colours that talk and sounds that move. This high will last approximately six minutes, but you’ll produce a masterwork if you can focus all of that overly caffeinated energy. It’s not my fault your insides feel like Mount Vesuvius. (Okay, it is.)

I might be inside a coffee cup, but make no mistake—I am filtered water. When I got here, you were sweating profusely and talking to a cupboard. I’m saving you from a nervous breakdown and rescuing your skin with essential hydration. You want my glow? The answer is H2O.