What it feels like to take on Kevin O'Leary 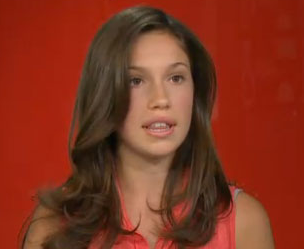 It seemed like an unfair fight. On one side of the table: Rachel Parent, a 14-year-old anti-GMO activist. On the other: Kevin O’Leary, a 59- year-old millionaire and conservative pundit so combative that his battles with co-host Amanda Lang are a key selling point of their show, The Lang and O’Leary Exchange.

Rachel became interested in GMOs (genetically modified organisms) while doing research for a school speech. She was so impassioned she began protesting at rallies. Last year she founded Kids Right to Know, a GMO-awareness group, and challenged O’Leary to debate his position on Monsanto, a company that distributes genetically modified seeds. She got the call.

Rachel prepped for the fight with lots of practice questions fired at her from friends and family. Two days before going on air, she learned the interview had been extended from three to 10 minutes because of the hype (it ended up going even longer). When Rachel walked onto the set and sat down, she felt surprisingly calm. “Whatever nerves I’d had disappeared — I couldn’t wait to start the debate.” She deftly dodged O’Leary’s many attempts to interrupt and intimidate her. For instance, he asked Rachel if she felt that she was a “lobbyist” or a “shill,” and suggested she didn’t understand science. Rachel kept her cool. “I didn’t want to get into name-calling,” she says. “I just shrugged it off.”

After a spirited debate over golden rice and the research around GMO safety, Rachel scored big.“I think everybody understands labelling on packages, and I think the trend in society is more transparency; and you’re going to get labelling, fine, okay,” O’Leary conceded. “When he agreed we deserve GMO labelling, I was like, ‘Yes! He finally said it,’ ” she said. But he countered with “Should we not be trying these things to help those who are dying, or are you against that too?” Unfazed, she retorted, “Should we be messing with Mother Nature?” Thirteen long minutes later, O’Leary concluded with a comment suggesting that perhaps since she was so young, she would “see the other side of it over time” and change her mind on the issue. She responded with every 14-year-old’s best weapon: a withering eye roll.

Watch their debate below: