How A Bold Reno Made This Condo Beautiful—And Accessible 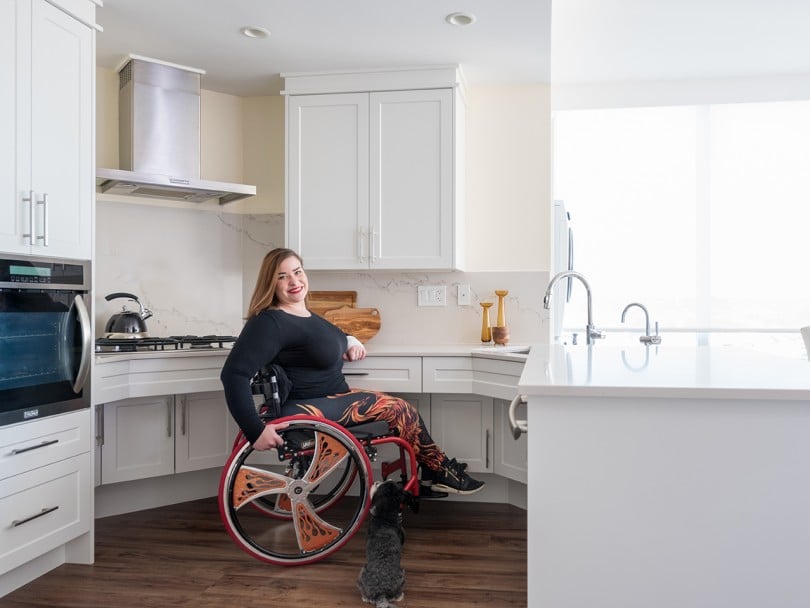 For the first time, Jenna Reed-Côté can actually use her bathroom counter to put her makeup on—which she does, to prepare for the photoshoot going down in her newly renovated condo.

“I was never ever able to face the sink in my bathroom. All of my makeup, all of my mirrors, everything was on the kitchen table. That is where I did everything,” explains Reed-Côte, the founder of Phoenix Attitude and a Rick Hansen Foundation ambassador. Before the renovation, she had to angle her wheelchair to the side whenever she used her counters, because they didn’t allow for leg room underneath. 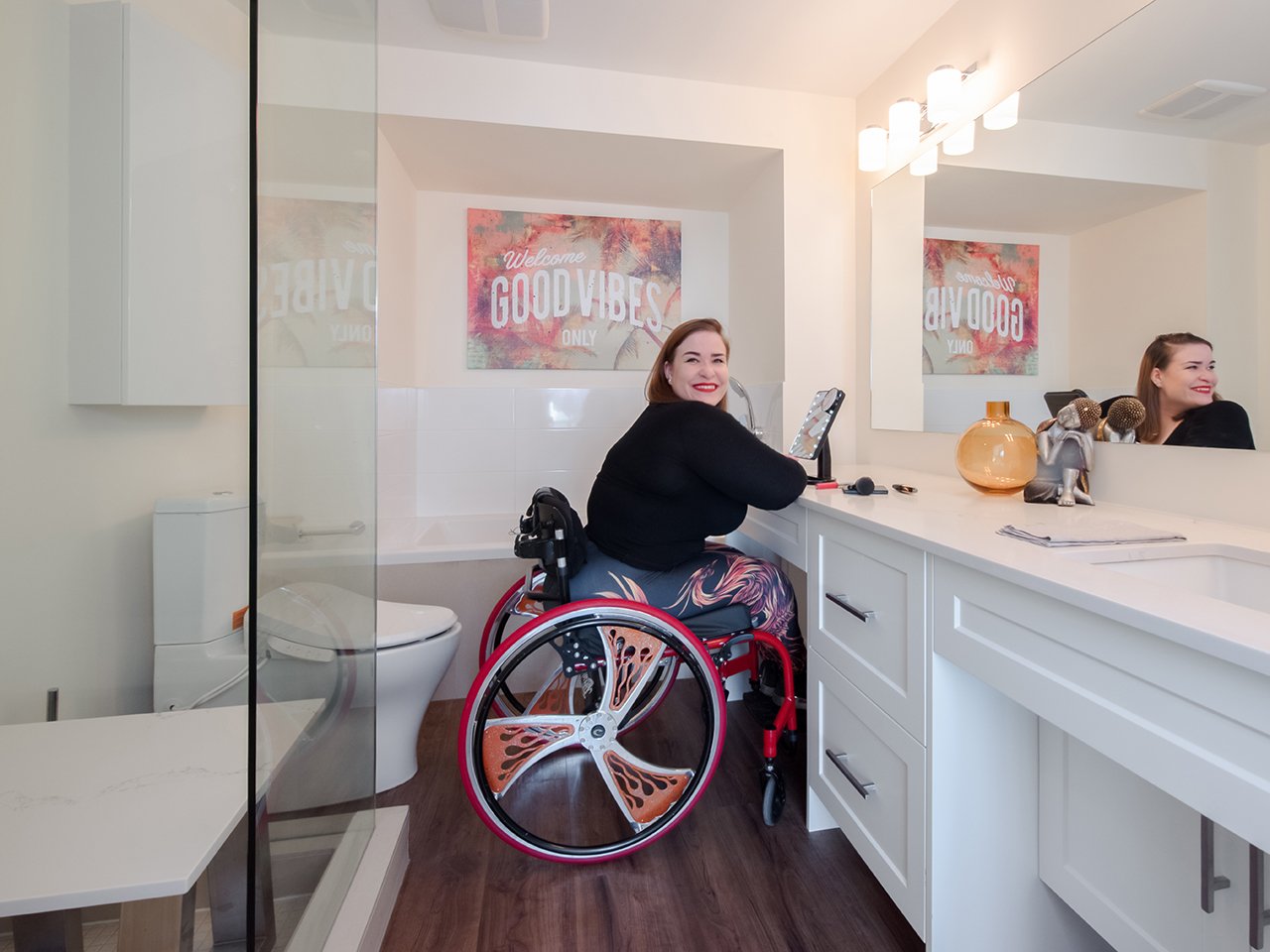 Jenna Reed-Côte’s washroom now has legroom under the counters so she can sit while doing her makeup. She’s also added a bench into her shower. (Photo: Wheat Gum Graphics)

“When you deal with adversity and health challenges like I do, you have to overcome so many barriers outside of your home,” she says. “You kind of hope that your home is going to be that one place where you don’t feel uncomfortable, unsafe, and unable to be yourself.”

Reed-Côté was born with spina bifida, a condition where a person’s spine and spinal cord don’t close properly. While surgery after birth—Reed Côté had two before she was seven days old—repairs this, there is permanent damage to the nerves. For Reed-Côté, the condition left her partially paralyzed and she relies on a wheelchair for mobility.

At first, she had resisted the the idea of renovating using universal design principles—design practices that make spaces more accessible for as many people as possible, no matter their age or ability. She had grown up with the mindset that it wasn’t so much about what she couldn’t do, but about what she still hadn’t learned to do. But over time she began to see how that outlook was holding her back. “Universal design doesn’t have to look medicalized,” she says. “It doesn’t have to draw attention to the challenges that you might face.”

She realized that renovating didn’t mean she was giving up, but rather, embracing who she was. And nearly four years after moving into her Vancouver home, she reached out to interior designer Kendall Ansell to help create a space that meets her needs.

The night before renovations began, Reed-Côté had a revelation—all those dramatized reactions to home renovation shows? Maybe they weren’t so fake after all. She started to cry, imagining finally having a workspace low enough for her to access and being able to use her oven more easily. “I won’t fear falling into the oven when I’m taking out a roast because it is too low,” she says.

“Every once in a while, I wondered if I was going to end up with my head in the oven, like the witch in Hansel and Gretel, if I lost my balance—which was scary, so a lot of the times I would do what I could to get the pans and the food out with one hand, which wasn’t actually making it much safer,” Reed-Côté explains. “Now the oven is chest level, and it opens from the side, so I can get in close and use both of my hands without burning myself and being able to maintain the centre of gravity I need sitting down.”

Ansell and her team also expanded the kitchen a few inches into the dining space, which allowed them to put the stovetop and the sink into a semi-circular orientation. “I wasn’t able to turn around in my kitchen before. I didn’t have the turning radius,” says Reed-Côté.

After the renovations were completed last year, she was able to cook a gourmet Christmas dinner for the first time without having to worry about her own safety. 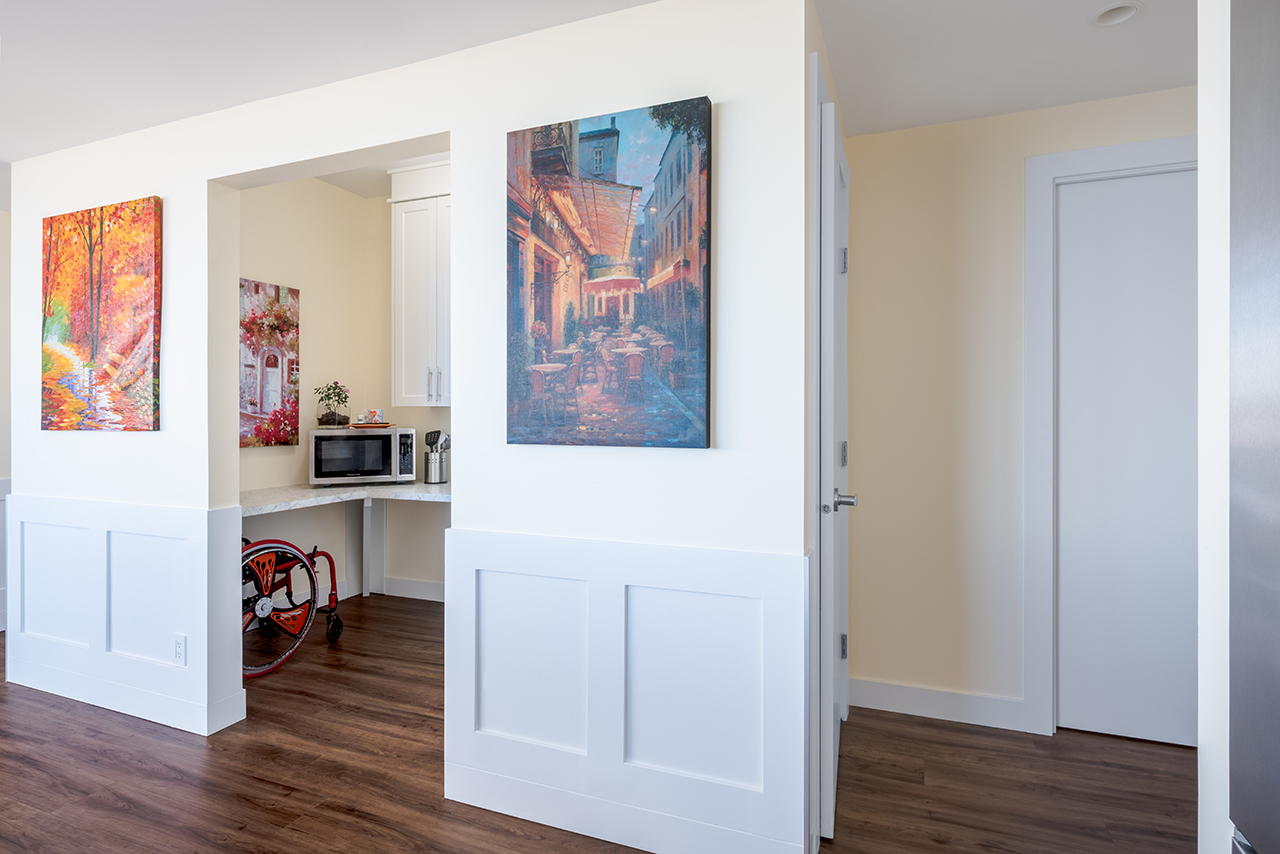 Ansell worried Reed-Côté still wouldn’t have enough counter space for her small appliances, so they turned the den into a “flex room” with extra cabinets for storage and built in an extra counter top that can function as additional prep space. And all of Reed-Côté’s cabinets now have pull-down shelving, giving her access to all the storage she couldn’t reach before. 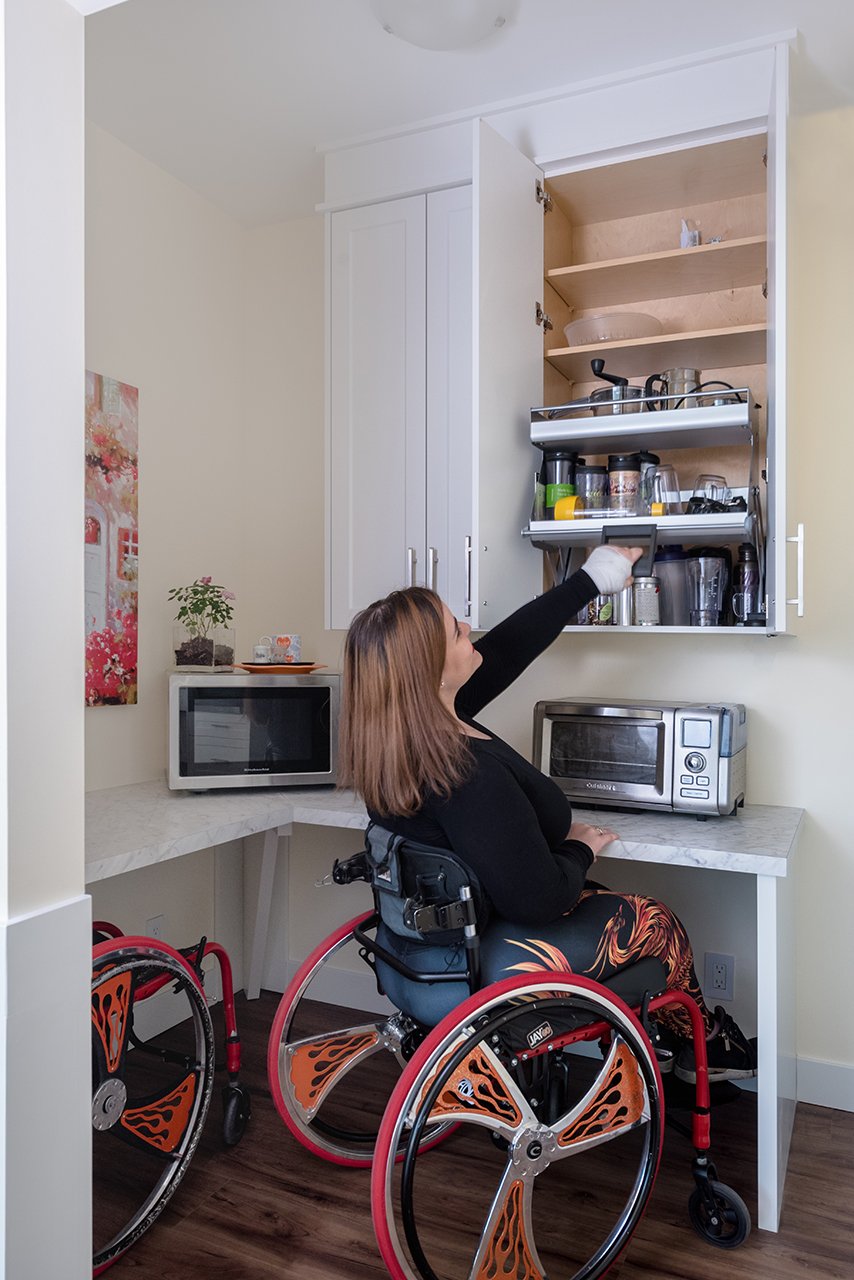 “I have everything in cupboards now, when they weren’t able to be before. All of my stuff was essentially on the counters,”  she says. “It is kind of mind blowing that I can put everything away now.” 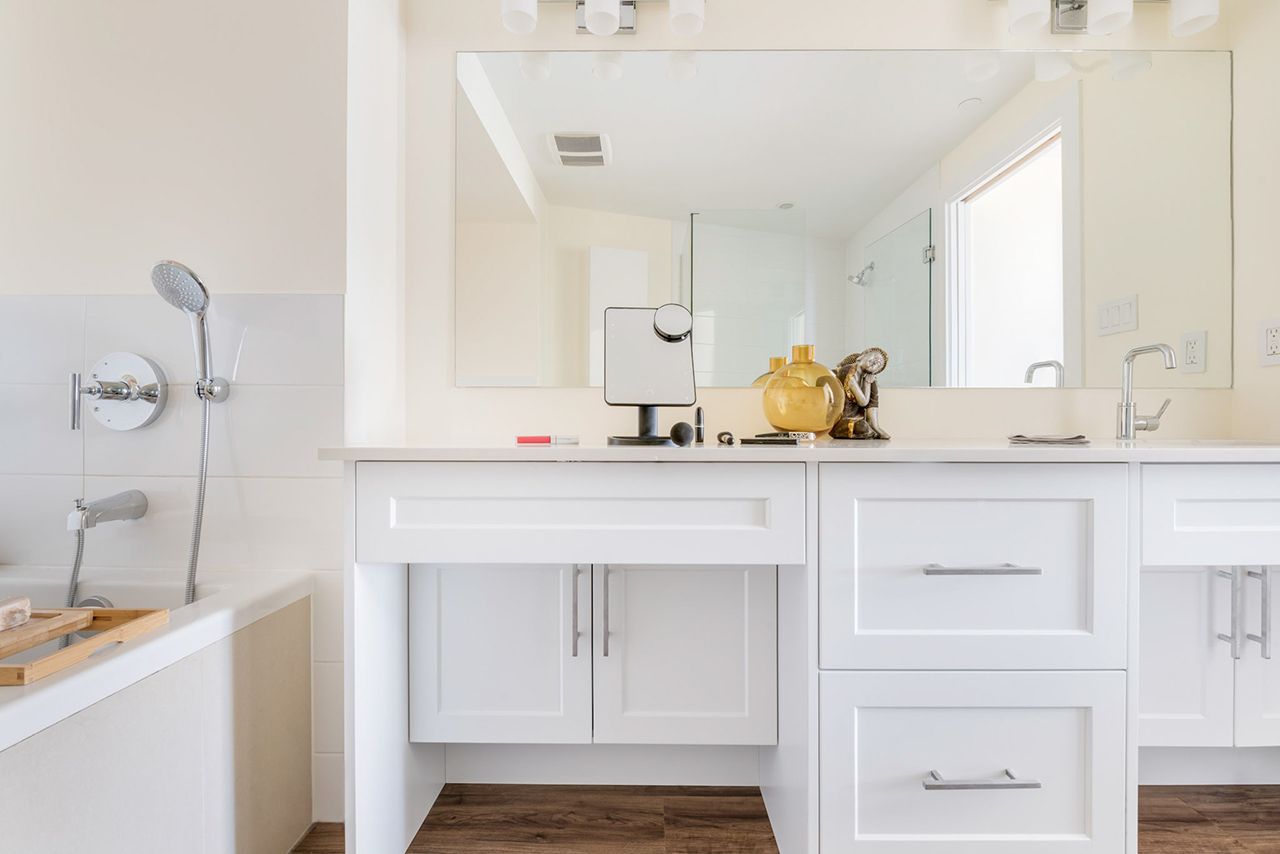 In addition to legroom under the counters, the bathroom features an extra shower head in the bath tub. (Photo: Wheat Gum Graphics)

In her newly renovated washroom, Reed-Côté now has a bench in her shower, counter space to do her makeup and a handheld shower head in her bath tub for days when she can’t take the extra step to use the actual shower. (While there are roll-in showers, Reed-Côté was worried about flooding and opted for the bench because she can take a step as long as she holds onto something.) Since designing Reed-Côté’s washroom, Ansell says she now encourages all her clients to consider universal design and long-term planning decisions during renovations, such as adding a bench into their shower. 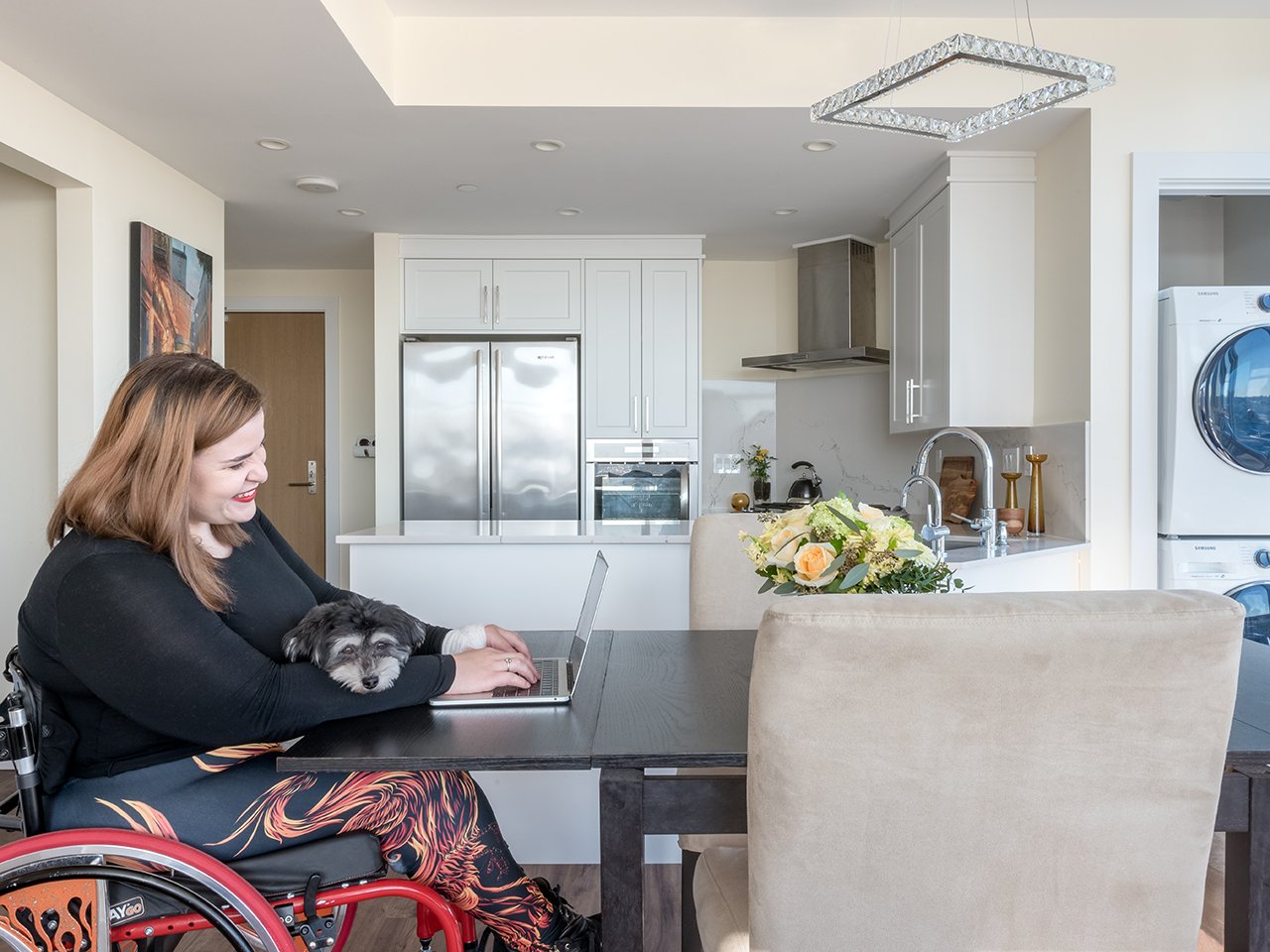 “I think the thing that designers need to realize is we can make spaces for people with different disabilities that can be equally beautiful,” Ansell says. But following universal design principles is costly. According to Ansell’s estimates, renovations like Reed-Côté’s cost twice as much as the average reno.

“I would love it if we could get to a place as a community and as a society where we’re seeing that this is inclusive by design. The only way we’re going to do make it more affordable, is by getting more people to see that and to actually implement it into their homes, which would mean the price would come down,” says Reed-Côté. “That would be phenomenal, no limits kind of living for the people who truly struggle to feel like they are competent.”