How To Declutter Ethically In Canada

When I realized I needed to seriously downsize, I wanted to find the most responsible way to give away, donate, recycle and reuse my stuff. 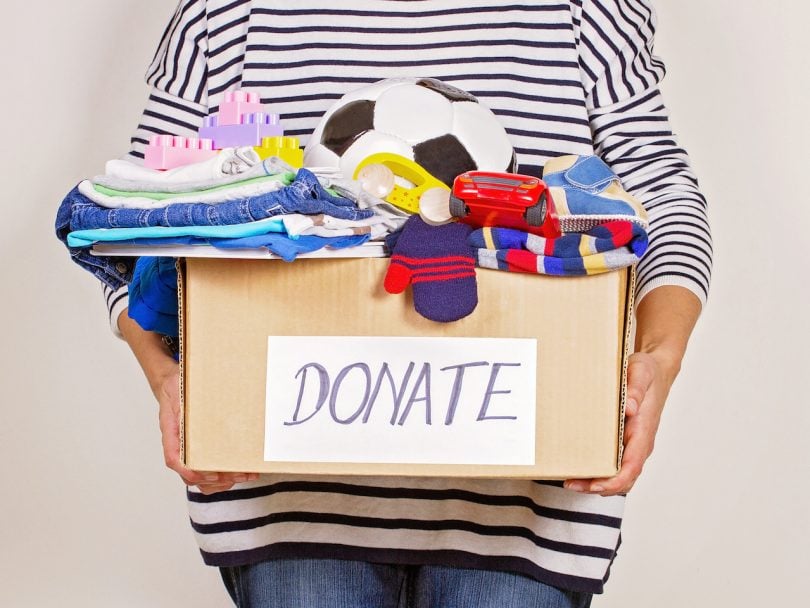 I’ll never forget the first time I tried to declutter. I sat on the parquet floor in my tiny apartment, surrounded by four banker boxes. I was engulfed in stuff: tons of books, records, photos of every embarrassing stage of my life, and box upon box of clothes, including garments I’d been hauling around with me since high school. The fourth-floor walk-up was a fire hazard for sure. I tried things on as I went, reliving the memories each item held: I danced around in not one, but two flowing skirts made of recycled saris, paired with a turquoise bra and a gold and turquoise harness made out of chains—a relic my friend had unearthed for me from her own boxes of junk. Memory lane was a hot mess, and I don’t think I got rid of a single thing. Back into the various boxes it all went.

Like seemingly everyone in North America, I have a problem with stuff. Most middle-class people live in houses crammed full of stuff they don’t need, with many adding square footage by renting storage units. There are now 3,000 of these facilities in Canada; in the GTA, there’s an estimated need of four square feet of storage per person. A lot of us are shaking this off, though, in favour of clean, minimalist spaces. Japanese minimalism, Scandinavian minimalism, and so-called “simple living” are on trend for a reason: people are overwhelmed, burnt out, and want their homes to feel like a refuge.

In my case, it was more than aesthetics that required me to change. When I realized I had to start getting rid of stuff, my possessions resided in not one, but four separate homes: I was moving from my tiny Toronto apartment to Saint John, N.B., where I had yet more stuff in the apartment I’d been subletting over the summer. I also had stuff at my partner’s house, and in my parents’ garage, basement and spare room. Most of it had to go, but I wanted it to get rid of it in the most ethical way possible.

Here’s what I learned about how to declutter in a relatively easy and yet responsible way.

This is different than donating, because it involves directly seeking out someone who can make use of an item, rather than giving it to an organization for resale or redistribution. It doesn’t mean saddling friends and family with stuff they don’t want just so you can avoid fully parting with an item. But if you have something you don’t need, and you know someone else could use it, give it away. Maybe it’s a friend or maybe it’s a stranger on the internet. For instance, my friend Matt is opening a restaurant in Saint John that’s inspired by his grandmothers. When my grandmother died a year and a half ago, I inherited a ton of her stuff. I didn’t have space for it all, and the sheer volume of it underscored the reality of her death in a way that made me sad. So, I gave a bunch of her dishes to Matt so that others can enjoy his delicious food served on them, rather than leaving them to collect dust.

Similarly, that ancient table or the chair that no longer matches anything you own could be seriously needed in another household. Toys, electronics and appliances are often greatly in need, too. I list these items for free on Kijiji or Craigslist, and someone usually shows up within a few hours with a story about how it’ll make their life a lot easier. This takes a little more effort, but the item also has a greater chance of actually being used. Added bonus: people are also likely to pick things up from your place if they’re getting them for free.

I consign books, clothes, shoes and accessories with small independent shops, trading old ones for new ones using store credit (or cashing out on the sales). I usually make a trip to the consignment store once or twice per season, whenever I notice I have a few things I’m no longer using. If I buy something new, I try to get rid of an older item.

Donating to Value Village isn’t what it seems: it sells only about a quarter of the donations that come in. The remainder either goes to recycling plants, into the landfill, or overseas, where it might be resold or put in another country’s landfill. For the stuff that’s in good condition, try reaching out directly to charitable organizations.

Most shelters will accept things like clothes, shoes, books, computers, even reusable water bottles as donations. Francine Nadler, the clinical coordinator with Montreal’s La Maison Benoît Labre, says that the shelter is always looking for clean, warm clothing in good condition, as well as hygiene products. “Think camping stuff, too,” she says. “Some people choose not to sleep in missions, so tents, sleeping bags and Coleman stoves are always useful.” Gym mats that are easily cleaned, as well as warm shoes and boots, clean socks, and any unused pocket hand warmers and lip balms are always greatly appreciated. Nadler says they don’t accept mattresses or furniture—any donations should be portable enough for people to take with them if they choose. And, while shelter hours are listed online, Nadler says it’s best to call first to make sure there’s space for your donations and someone around to receive them—anything left outside can’t be used.

I donate books that are in good enough condition to my local library, and they’re happy to have them. Anything dog-eared or ripped is a no-go, though. I tried to donate some tatty volumes once and earned the most soul-crushing glare from the librarian.

Old glasses can be donated to eyewear chains like the pretty ubiquitous Hakim Optical, which then distributes them to people who need them. Typically they accept prescription reading glasses, single vision or bifocal glasses, as well as prescription safety glasses and sunglasses. Your cracked or unused iPhone can be donated to the Canadian National Institute for the Blind. They’ll provide you with a prepaid envelope to send to them, and then they’ll fix it, restore it to working order, and give it to a blind person who needs it. Even your old, stained or ratty bedsheets, blankets and towels are wanted by someone: the animals at your local vet or animal shelter. I always call ahead before I do this, but I’ve never had my local animal hospital refuse items like these.

If an item is clearly too worn for donation or resale, try repurposing it as cleaning rags. I do this and I have not purchased a package of paper towels in years. Of what’s remaining, Kate Bahen of Charity Intelligence Canada says, “If there are no takers among friends, family or local charities, I put my clothes in black garbage bags for Canadian landfill. I’d rather this then having the clothes shipped overseas, dumped in developing markets, crushing local textile markets and trapping poor rag traders in poverty, and ending up in a garbage heap across the world causing environmental damage without sufficient regulation.” That said, this is a last-ditch resort. If something is in good, unblemished condition, charity stores can sell it to someone who needs it for the discounted price. The trick here is to carefully assess each item and whether or not it has any life left. If you do have a pile of things in good condition, Habitat for Humanity will come pick up the items, sell them, and use the proceeds to build homes for people in need.

Many larger Canadian cities have well-developed online trading networks where you can offload virtually anything you don’t need to a grateful neighbour who will swap you for something useful. Using the former Bunz Trading Zone in Toronto (now Palz on Facebook), I successfully traded heaps of clothing, home decor, records, furniture and other unwanted things for gems like a vintage Betsey Johnson slip dress, a Levi’s sherpa jacket, a bike and professional haircuts.

After all the work I’ve done to clear things out, I’m strict about what I bring into my house. Unless I need to replace a garment that’s worn out, I don’t buy it. I borrow books and magazines from friends or the library. When you need to buy something like consumables, consider buying things whose packaging can be useful later: products in sturdy glass jars instead of plastic, for example. Use the jars to store food or homemade beauty products, or buy beeswax from a local beekeeper and make some cheeky candles. You can be even more crafty and annoying, and turn old linen bedding into reusable produce bags for the grocery store, or build shelving and furniture out of scrap wood and copper piping.

FYI: Not everything you toss in these bins gets recycled, and according to a report produced by Deloitte for Environment and Climate Change Canada, only nine percent of plastics are recycled in Canada. Be sure to check the recycling guidelines in your area. There will be a small number, usually listed inside of the recycle symbol on any given plastic item, and your municipality will tell you whether that item is recycled.

It’s admittedly hard to stop buying things. It takes practice and concerted effort, but I’m learning to replace shopping, thrifting and my general obsession with objects with other activities: making what I need, reading or learning something new, or going outside and seeing what’s going on around me. I still shop, of course—I’m not dead. But I was sick of making so many trips to the recycling centre, and having tons of ill-fitting clothes that just didn’t work. I felt guilty, anxious, overwhelmed, and like I had nothing to wear. These feelings ultimately make me want to live with less stuff. So I stopped buying things I didn’t need, and, when possible, things with excessive packaging. I buy in bulk when I can, bringing my own jars to reduce waste and save money and time. Honestly, I use every grandma’s favourite cliché: I make use of what I’ve got.