How One Couple Transformed A Charmless House Into A Dream Home

The house was the right size and close to their kids’ school. But everything else about it was wrong. Here’s what they did. 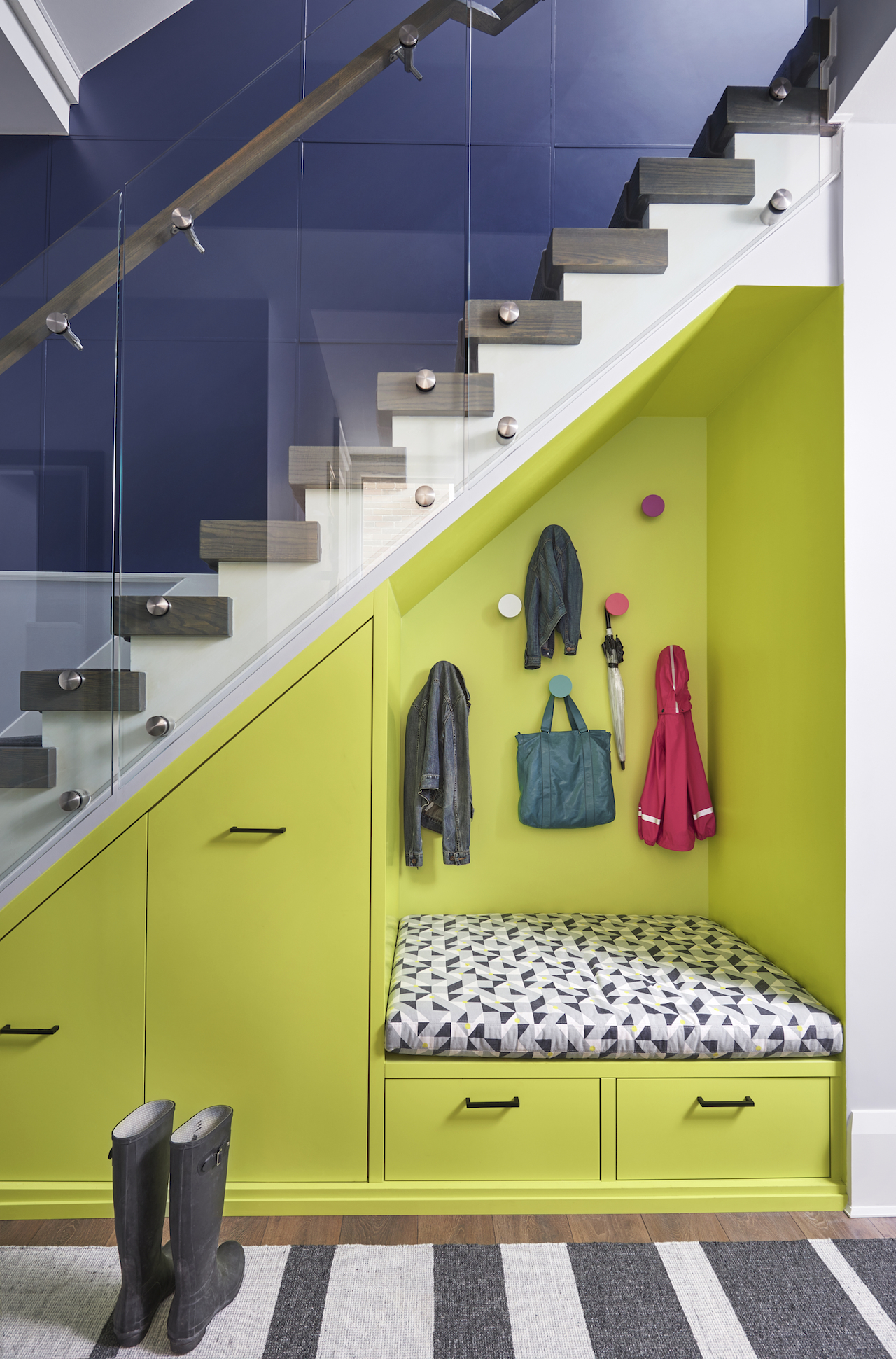 AFTER: The new entry way has a place for everything. Photo, Stephani Buchman.

Often, it’s the romantic features of a house that attract the homeowners. The big stone fireplace that conjures up images of hot cocoa with the kids, or the peony-filled backyard that summer dreams are made of. But when Samara Enchin and her husband, Jacob, were house-hunting four years ago, the couple chose a house purely for its practicality—not its poetics. The two had outgrown the quaint, century-old bungalow where they were raising their three kids in North Toronto. Wanting to upsize but stay in the same school district, they realized they’d have to compromise on the architectural character they loved—old oak doors, original stone, cut glass windows—to stay within budget.

The 2,200-square foot home they eventual bought met the most important criteria—it was affordable, spacious and close to the kids’ school. Unfortunately, just about everything else was wanting. “It had absolutely no charm,” says Samara, who spent the first few months living trying to ignore its defects. It was a newly built abode constructed by and for a bachelor, someone with a penchant for bright white walls, stainless steel embellishments and spaces that were so ultra-minimal that they instantly looked disastrous when Enchin’s kids, all under eight, tornadoed around. 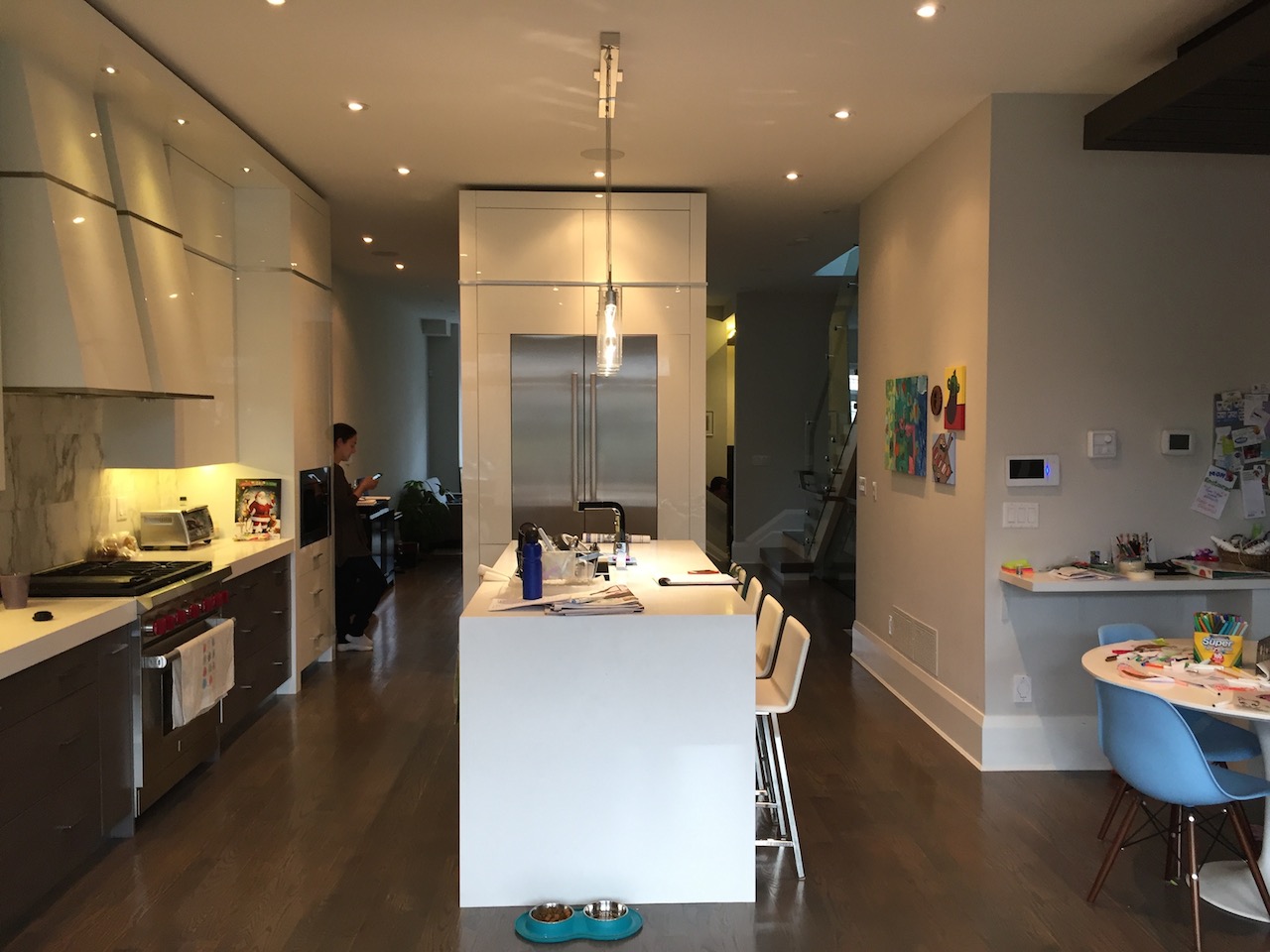 BEFORE: When they moved in, the kids had trouble opening the kitchen cupboards.

Eventually, that indifference ballooned into pure disdain, as its myriad faults became more evident. It didn’t have a working tub for bath time, its surfaces were so slick that that the kids slipped on the stairs and had trouble gripping the super shiny cabinet pulls. “Over time, the home grew to be my archenemy,” says Samara.

But like many families, Samara, who stays home with the kids, and Jacob, a lawyer, didn’t have buckets of cash for a major overhaul. So they made do with the house for two long years before working with interior designer Meghan Carter to plan a shoe-string update that addressed their major problems. Since then, they’ve stayed in the house, slowly, thoughtfully infusing character to the otherwise cold aesthetic. All without incurring mountains of debt, or moving into a pricy remodel during the remodel. Here’s how they did it.

Design for your lifestyle 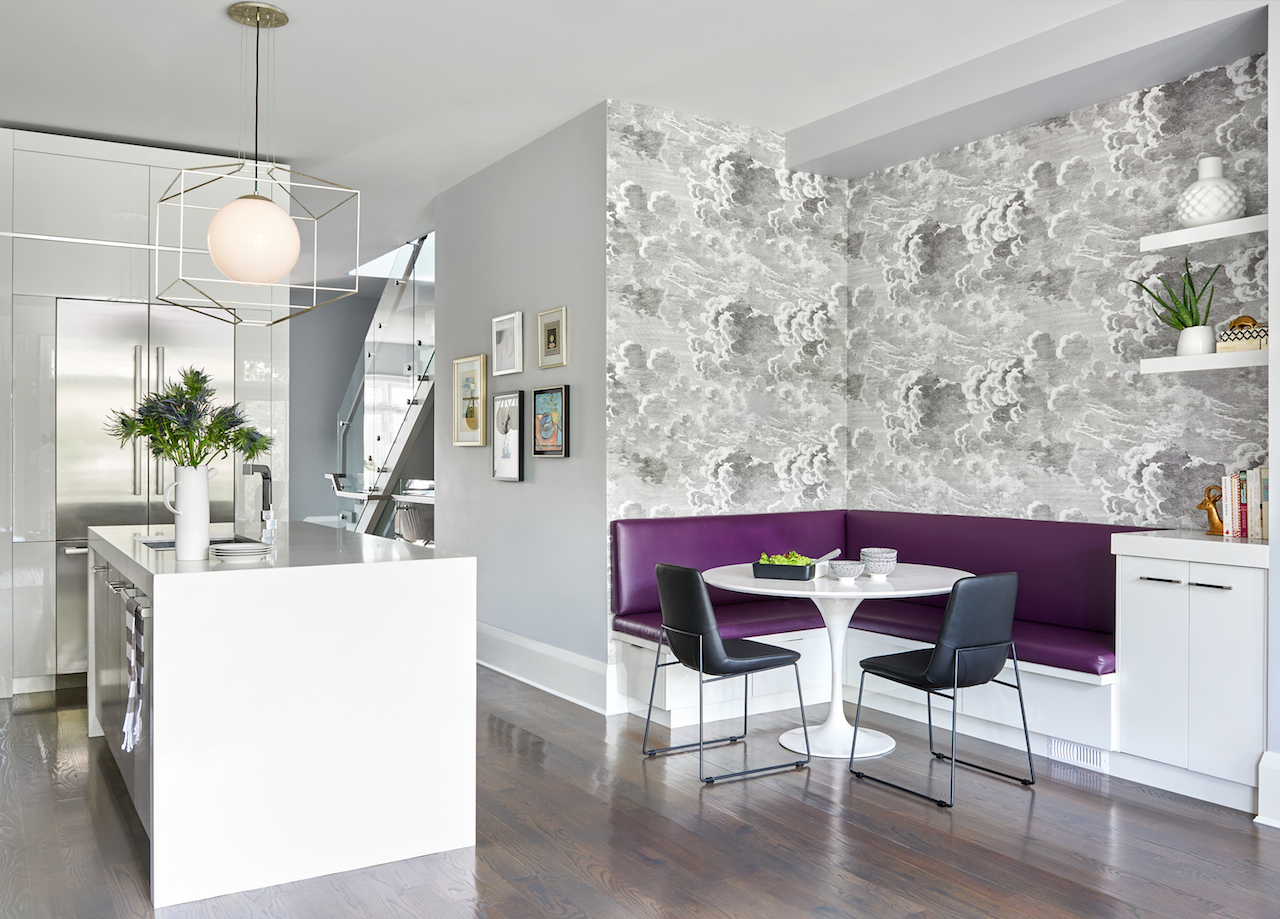 AFTER: The goal for the kitchen was to create a liveable, easy to maintain space. Photo, Stephani Buchman.

One of Samara’s biggest frustrations about the house was the relentless white. The entryway was particularly irksome with its white walls, white tiles and white grout. “I used to dread coming home with the kids,” says Samara. “I just knew the space would instantly look dirty.” As a quick, inexpensive fix, Carter re-painted the walls a vibrant combo of blue and chartreuse and swapped out the white tiles for shades of black and grey.

Carter also addressed another major oversight—a lack of storage space—by converting an unused gap under a nearby staircase by adding custom closets and a bench that simplifies the process of coming and going from home. “There used to be nowhere to put clothing, knapsacks and shoes,” says Samara. “Meghan leveraged an otherwise wasted area to make the hallway work.”

Another smudge-prone, blandly white space was the kitchen. But Samara didn’t want to rip out and replace all the cupboards. “Samara was very waste-conscious,” says Carter. “And it would have been very wasteful to get rid of an entire, basically new kitchen.” Instead, Carter planned some smart, incisive interventions to make the area easier to maintain. A crystal chandelier, which mainly just collected dust, was swapped out for something simpler (a geometric, clean-lined pendant), and grey wallpaper was applied to an accent wall adjacent to a richly hued banquette. 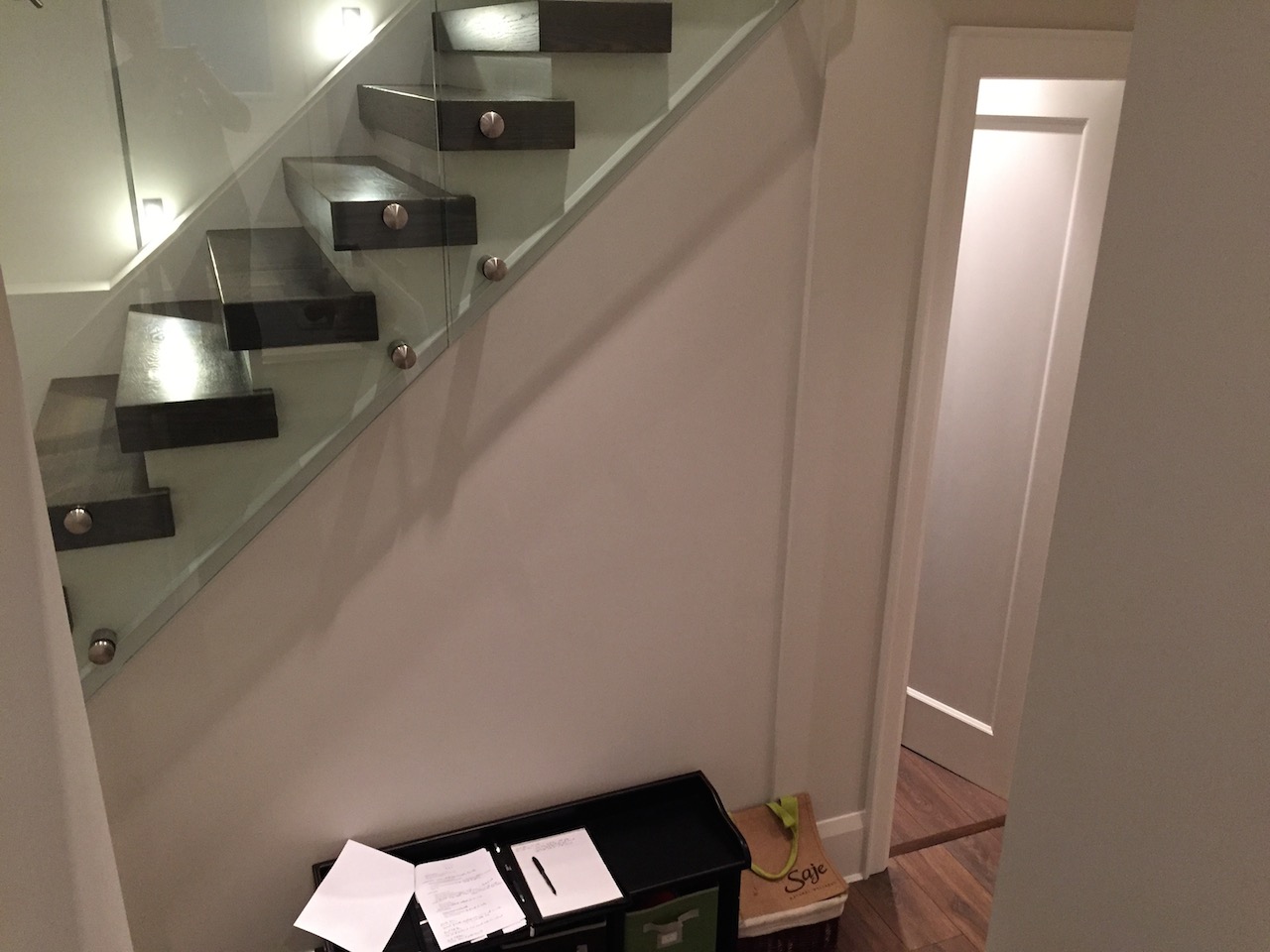 BEFORE: The kids often slipped on the stairs and the home’s all-white aesthetic was impossible to keep clean.

Replacing all the hardware also made a big difference, both to the look and, more importantly, the feel of the kitchen. “The drawer pulls were stark, institutional and too small,” says Samara. “They were just flat, slippery flaps of metal that my kids struggled to open, especially when their hands were wet.” Now, large, mat black handles protrude from the doors. Because they are much easier to grip, and the little ones no longer need to paw on the cupboards to get in, the kids are far less likely to leave finger prints. “Changing the pulls changed the space,” says Samara.

Elsewhere in the house, Carter and Samara took a similar approach. The door handles going into the bedrooms used to be “crazy angled at the edges,” says Samara. “If my hand bumped into a door knob as I walked down the hall I would scratch myself.” Now, all the fixtures are levers with child-safe rounded edges.

As further proof that the place was not kid-friendly, the original stairs winding through the home’s three storeys were made from a glossy, shiny wood. “It was a slip and trip hazard,” says Carter. But replacing such a major structural element would have been prohibitively expensive, so she took a more economical approach by adding a rug runner that better grips the bottom of little feet. “The carpet looks a lot nicer,” says Samara. “It also makes the staircase less echo-y.”

Use what you can 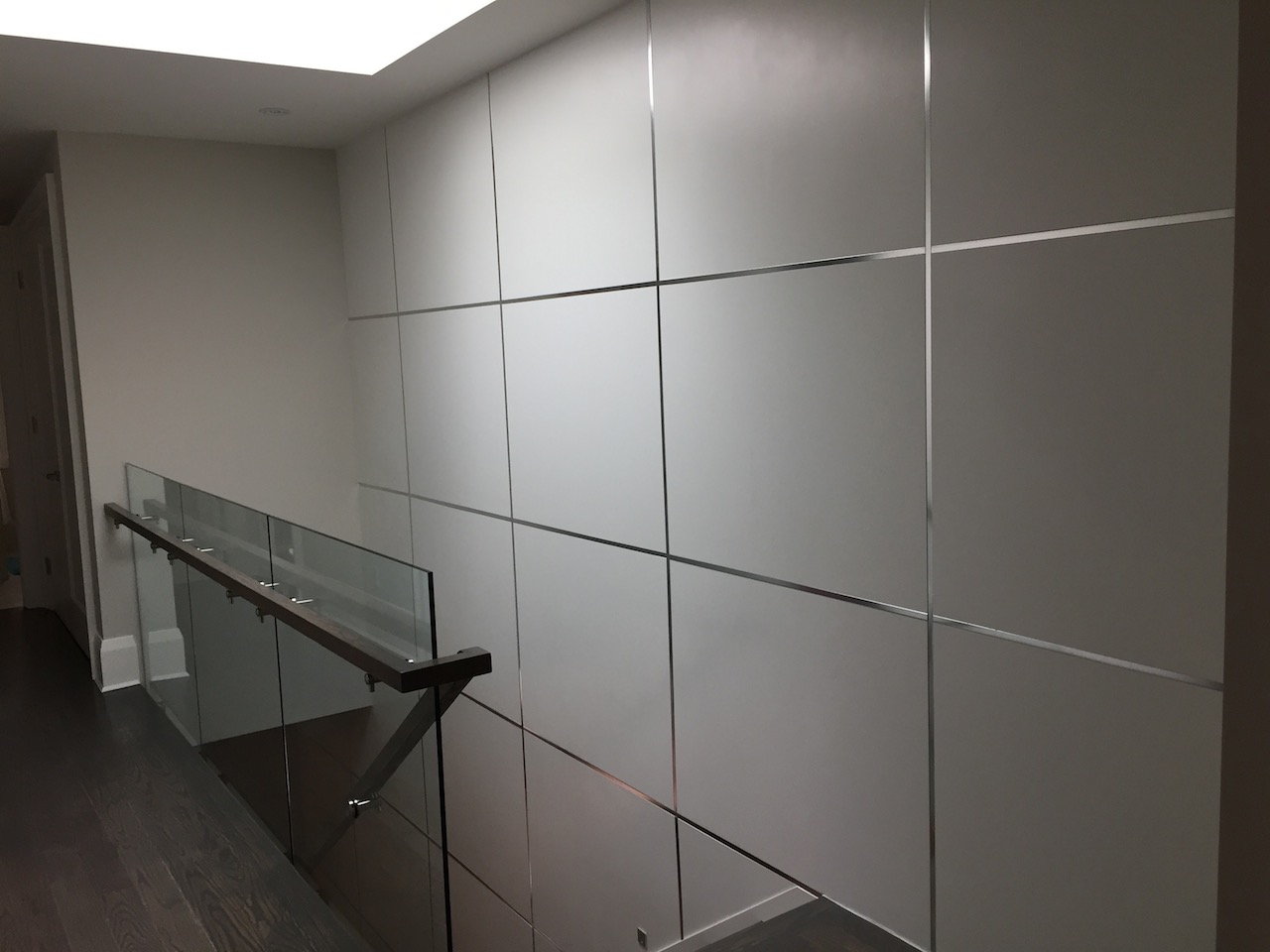 BEFORE: The large ugly metal panels that lined one wall of the house were too costly to remove, so they decided to paint them an inky blue.

Aesthetically, one of the most unfortunate aspects of the house was a series of large metal panels lining the wall beside the staircase. “It was shiny and ugly,” says Samara. But ripping it out would have been pricy—requiring a metalsmith for the removal and drywall expert for the replacement. So Carter painted the surface a rich but receding navy blue, essentially erasing the too-prominent, too-corporate feature by hiding it with colour. “In general, it’s less expensive to modify what you already have,” says Carter, “as opposed to trying to tear everything out and starting over.”

One way that Samara and Jacob kept their costs in check and managed to live in the house during the renovation was to stagger their projects, and not try to fix everything all at once. They started with their children’s bathroom. “There was a tub,” says Samara. “But it wasn’t hooked up to the plumbing. It was just sitting on the floor of the bathroom, no connected. Which we didn’t realize until the first time we tried to bath the kids. It was insane.” Their own master bathroom is still on the to-do list. “Speed and saving money don’t always go hand in hand,” says Samara. “But I know that eventually, we’ll have the house we want.” 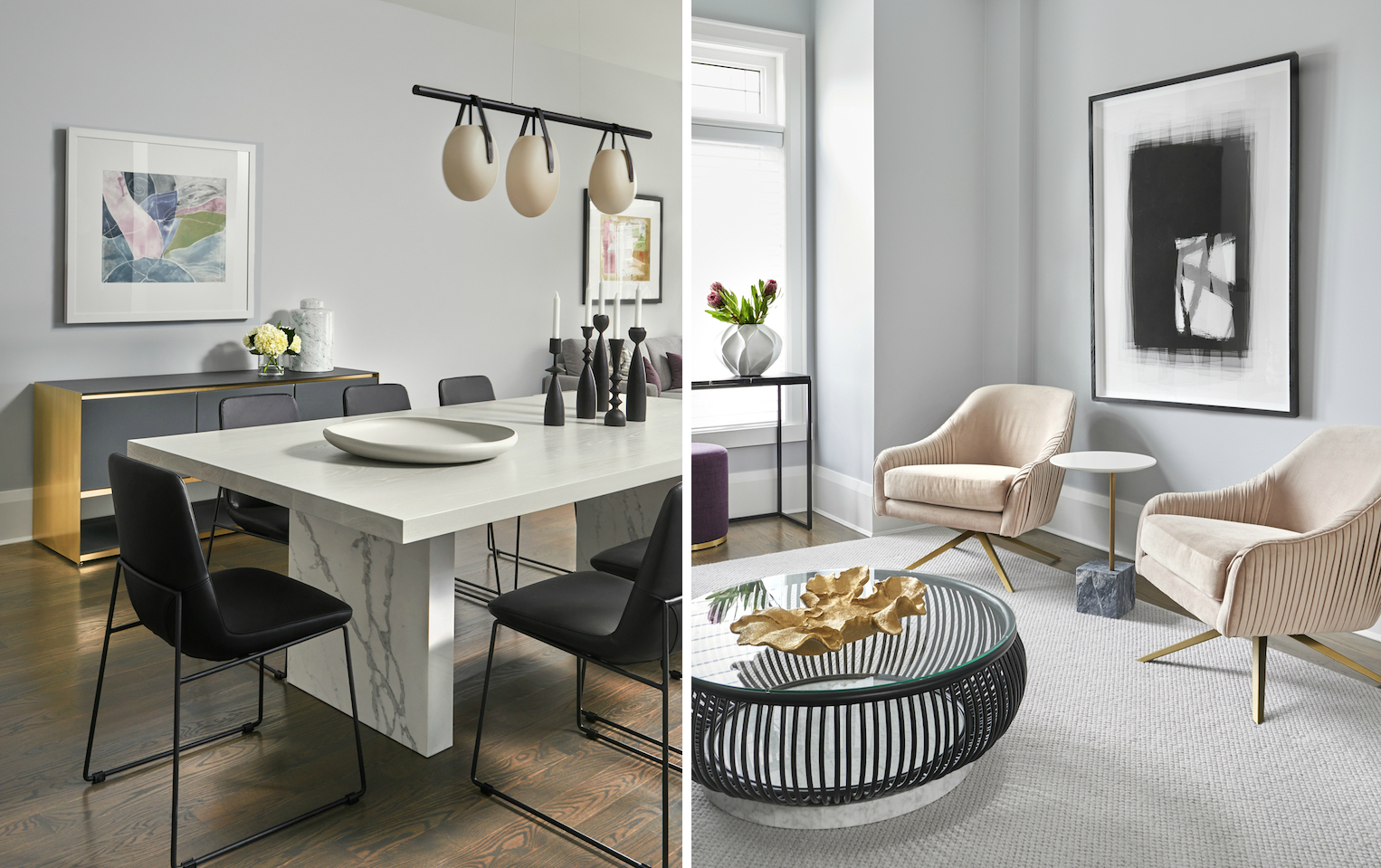 AFTER: The couple splurged on a custom dining room table. Photos, Stephani Buchman.

Because the first major phase of the re-design (which took six months during which time the family stayed in the home) came in under budget, and was mainly focused on kid-friendly features, Samara and Jacob decided to indulge by updating their living and dining areas—just for them. They commissioned a custom dining room table from Toronto carpenter named Mary Ratcliffe, and bought a unique chandelier from New York City-based, luxury lighting company Rich Brilliant and Willing. “We tried our hardest to save money in a lot of places,” says Samara. “So it was nice to be able to splurge as well.”