See how Artist Richelle Bergen turned her small Manitoba bungalow into a sanctuary for work and play. 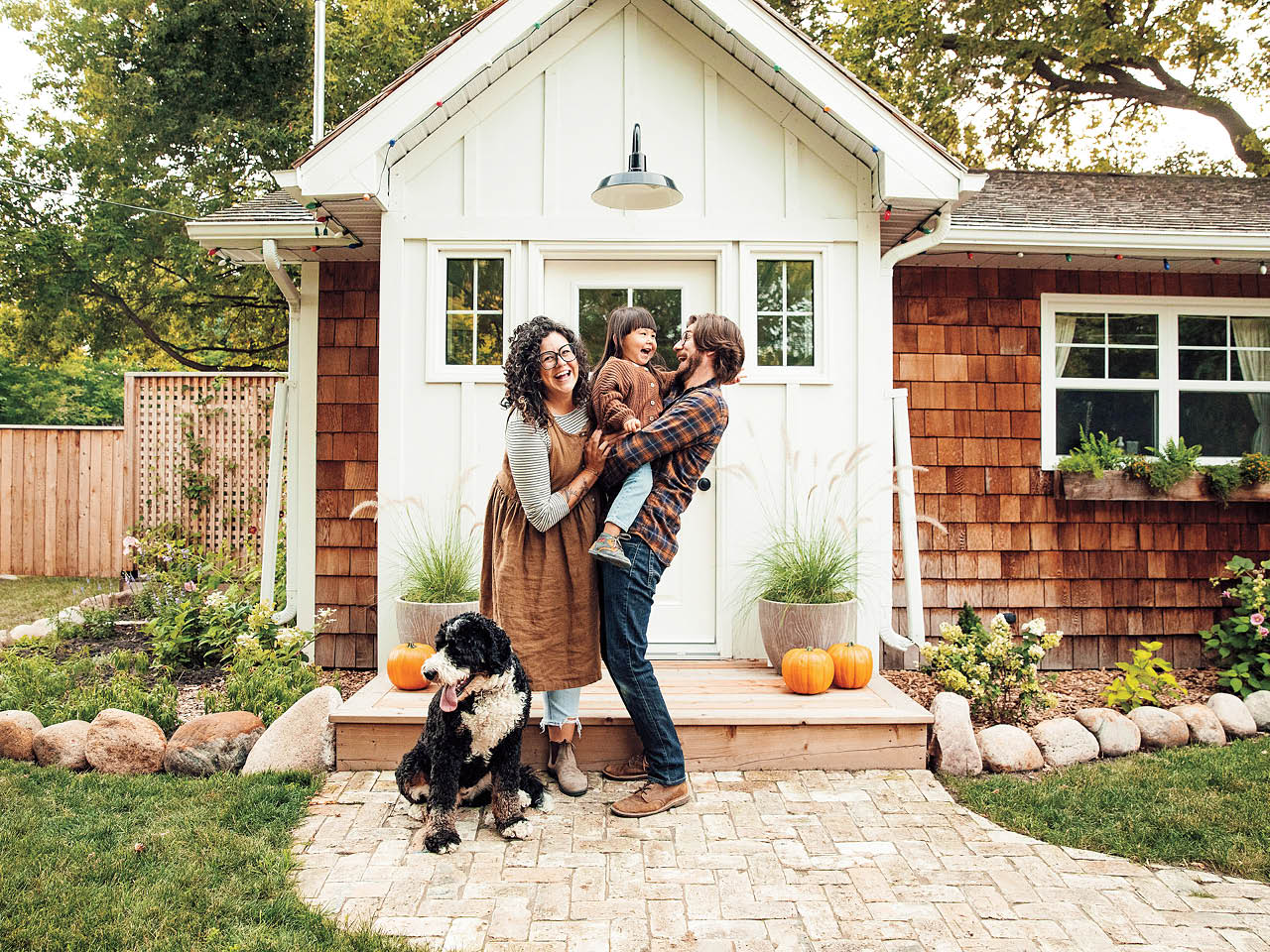 Altona, Man., is the sunflower capital of Canada. The small city, 100 km southwest of Winnipeg, has an annual festival celebrating the happy blooms, as well as a giant replica of Vincent Van Gogh–style sunflowers. It’s also where linocut artist Richelle Bergen and her husband, Ryan, a graphic designer and screen printer, live. The creative couple shares a modest two-bed, one-bath house with their three-year-old daughter, Sunnie, and black-and-white bernedoodle, Posie. Over the past eight years, the pair has renovated and redecorated just about every inch of their home—and Instagram has taken notice. Richelle has more than 31,000 followers (roughly seven and a half times the population of Altona), including bestselling American author Glennon Doyle. 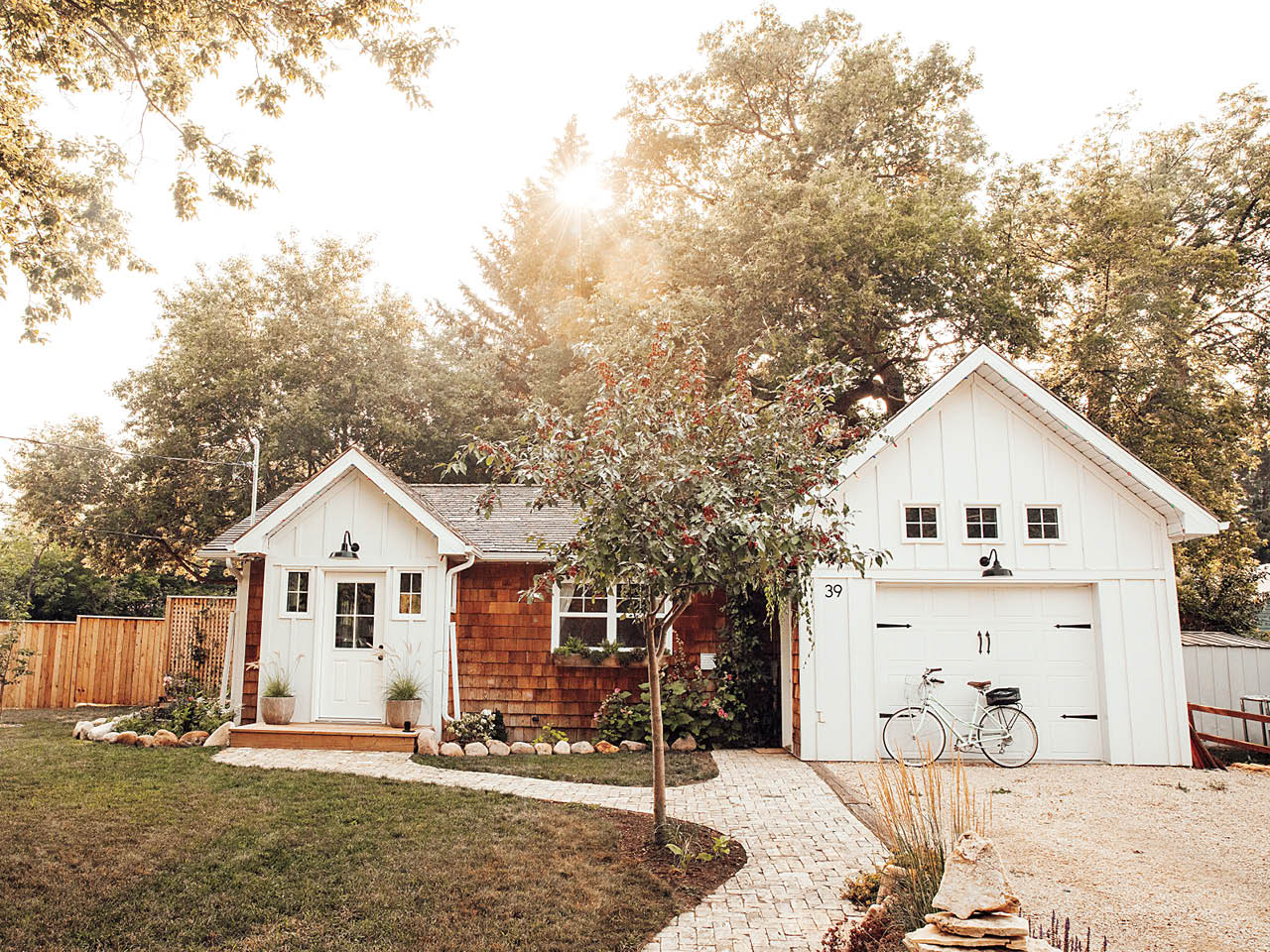 The couple added a 400-square-foot garage to their home to create an art studio and sleeping loft. (Photo: Lynette Giesbrecht)

“You could say it’s farmhouse with a side of English cottage and a dollop of this and that,” says Richelle of her decorating style. Thrifted pieces and hand-me-downs from friends are mixed with furniture made by Richelle’s father, Richard. Ryan and Richelle purchased the 570-square-foot bungalow in 2013 and added a 400-square-foot garage—which serves as an art studio with a loft above where the family sleeps—two years later. “I was first drawn to the house’s cottage vibes, but I think the only thing that my husband found charming was the low price tag,” jokes Richelle, who makes the most of every inch with practical-yet-beautiful organizing solutions. Large windows and an open layout also make a world of difference in the compact quarters. 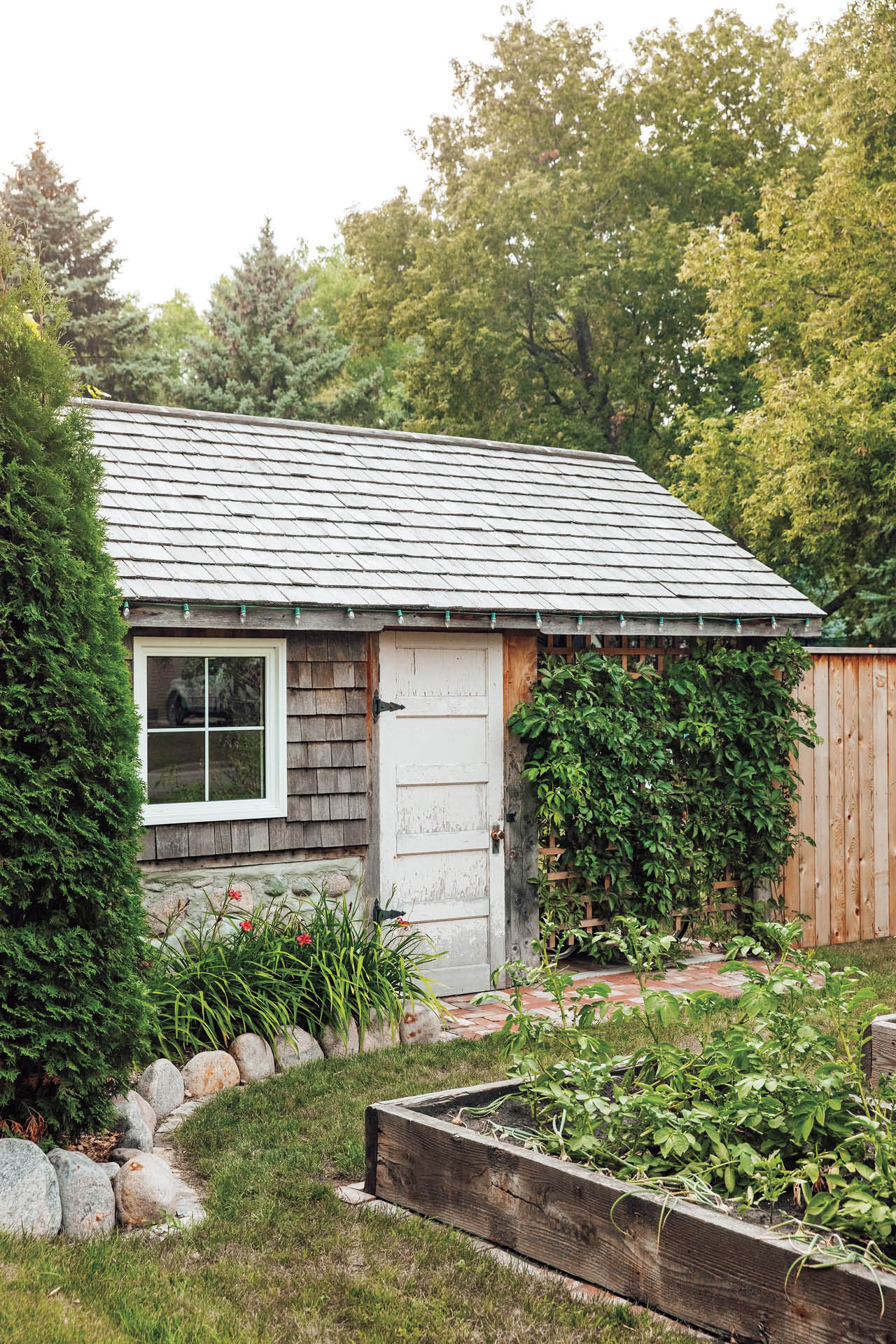 In the Bergens’ backyard, Ryan and Richard built a quaint tool shed with cemented stone on the bottom and cedar shakes on top, as well as an adorable A-frame playhouse. Simple homemade garden boxes surrounded by wood-chip paths are an oasis for birds—like chickadees, robins and finches—butterflies and bees. “It’s stunning in July and August, when the flowers are in full bloom,” says Richelle. 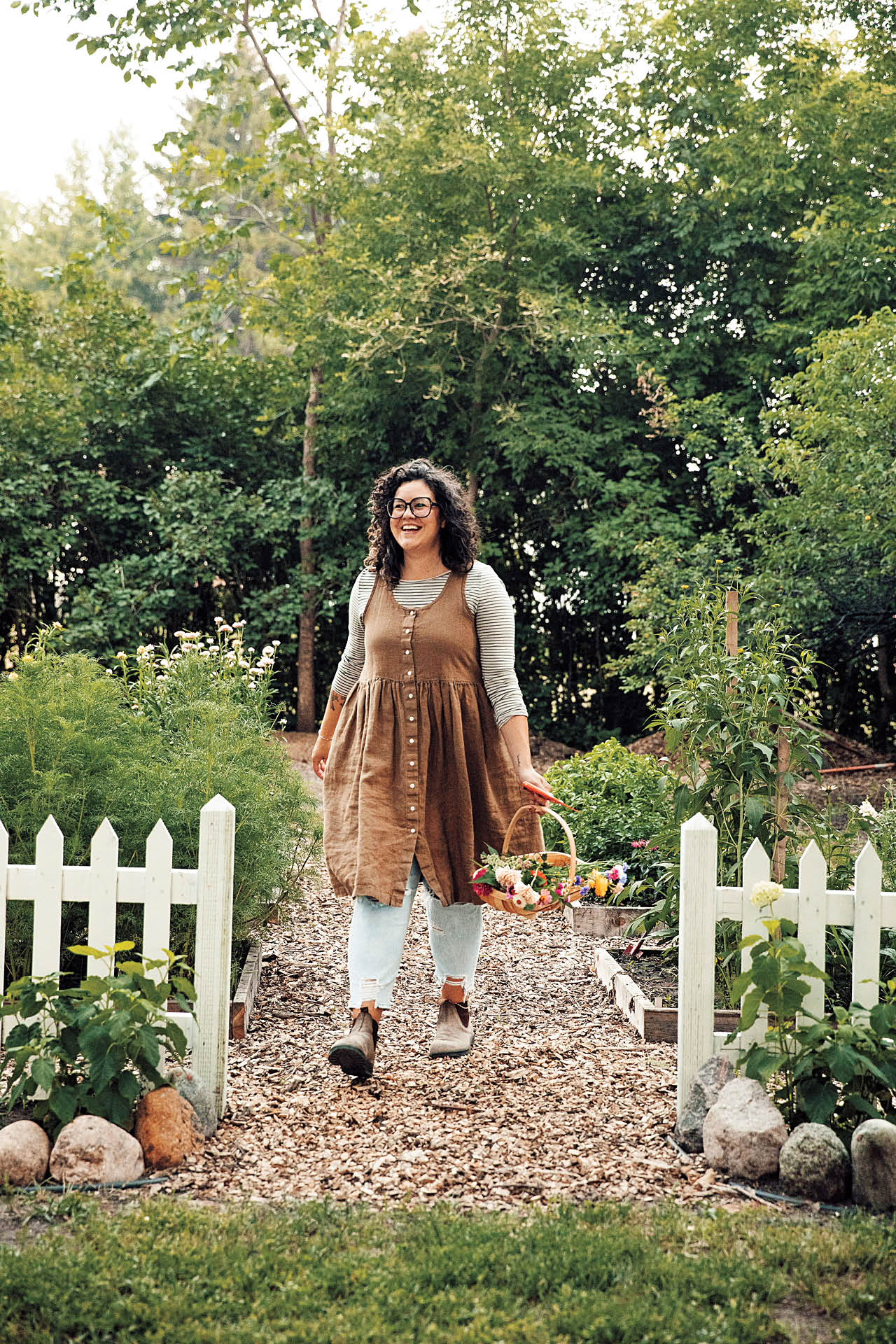 From bluebells and buttercups to the wheat fields and leaves of Manitoba, nature is at the heart of Richelle’s artwork. And with a variety of flora and fauna in her own backyard, she doesn’t have to look far for inspiration. When it comes to her work, Richelle—whose mother is a painter—says she fell in love with “the smell of the ink, the process of painting every piece by hand and the variations of each print.” 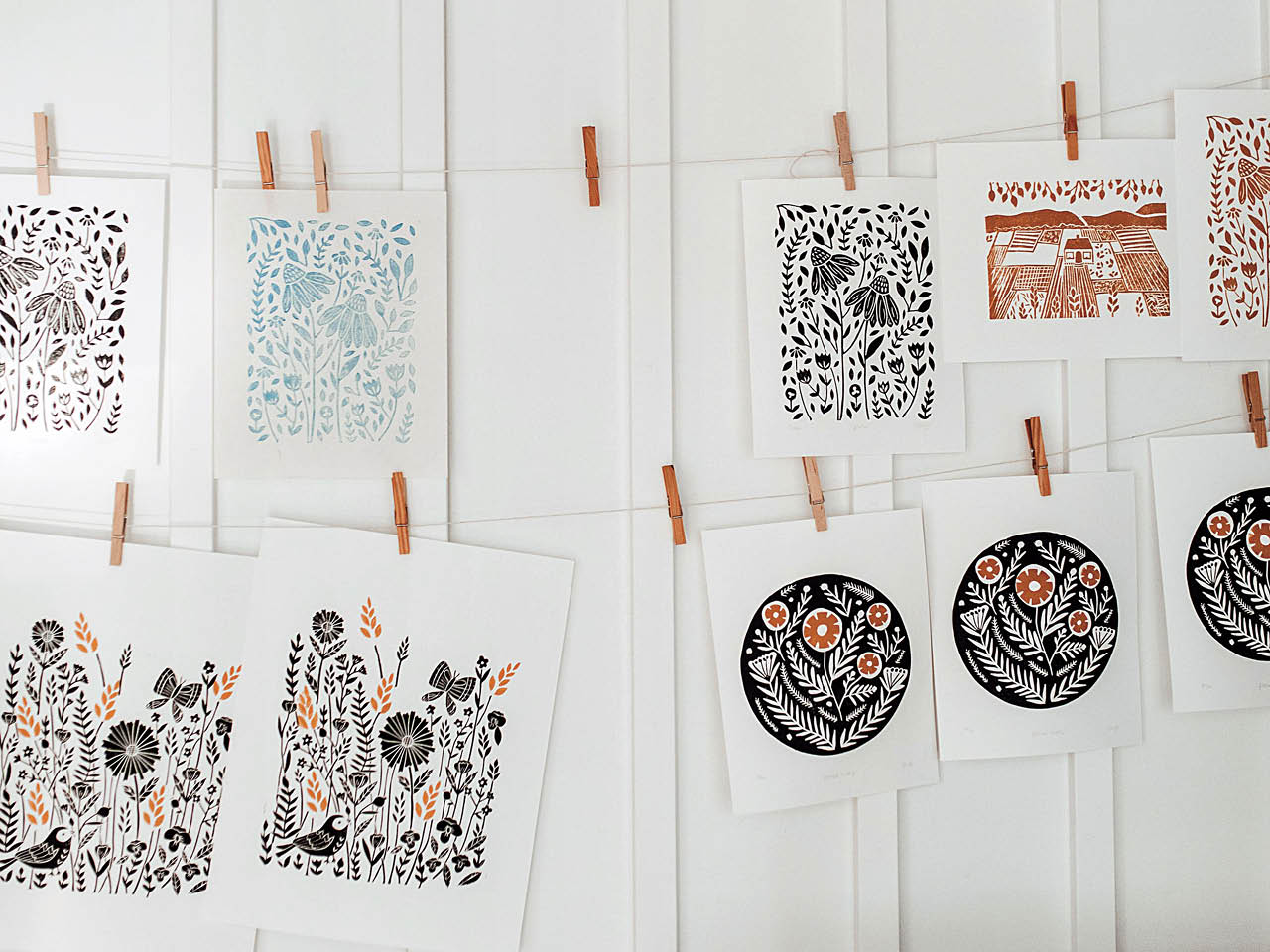 All of Richelle’s prints are originals, which she titles, numbers and signs. (Photo: Lynette Giesbrecht)

Although she’s been spending less time in her home studio since becoming a parent, Richelle, who tried to get pregnant for four years, couldn’t be happier. “Infertility was the hardest journey to walk through.” After a round of IVF and a miscarriage, Richelle and Ryan decided to explore adoption. Shortly after, Richelle got a life-changing Facebook message from an old summer camp friend she had lost touch with. 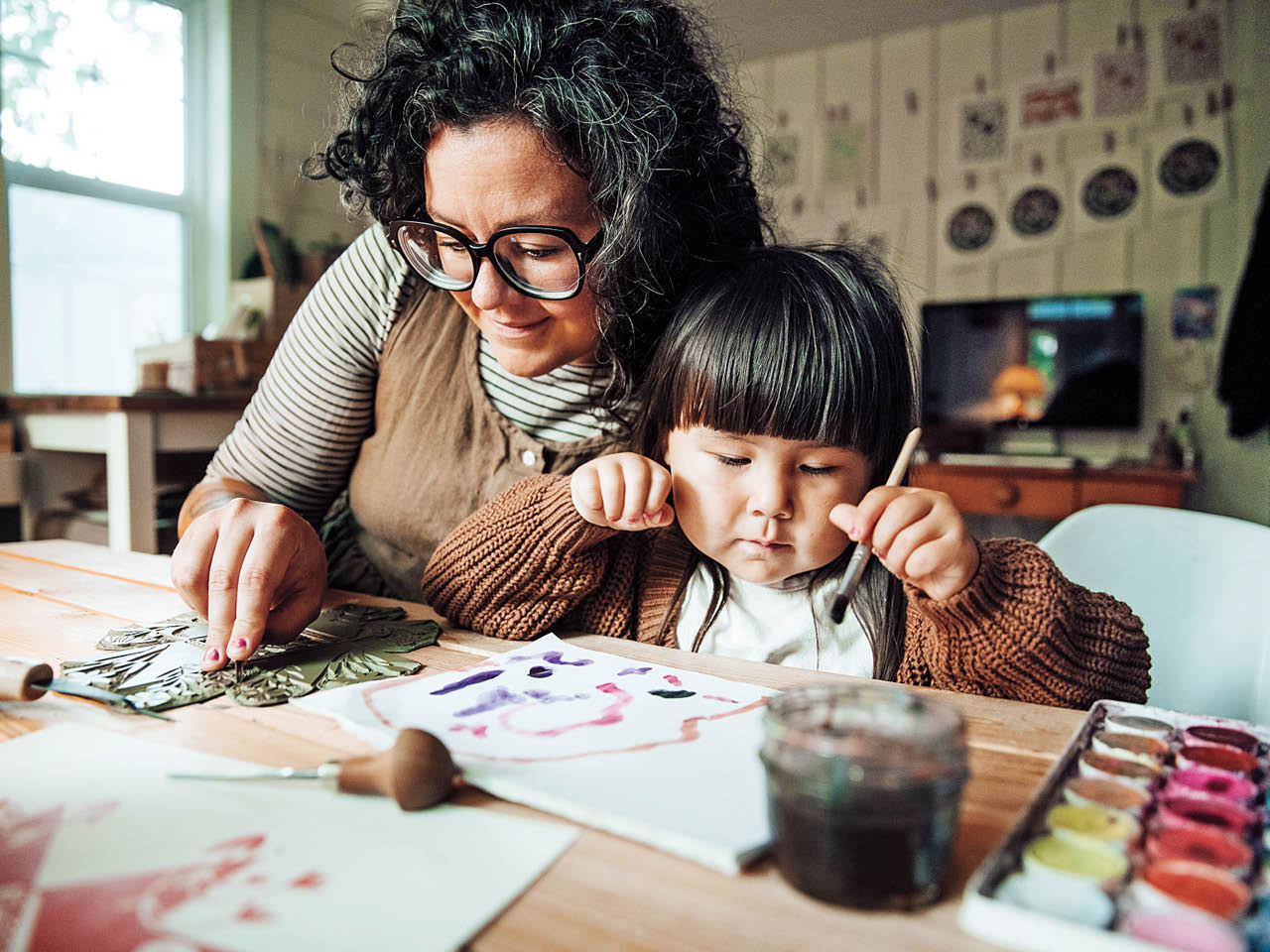 Richelle’s favourite part of the printmaking process is carving her design into the linoleum block. “I get to slowly see my vision come to life,” she says. (Photo: Lynette Giesbrecht)

They rekindled their friendship, and a few months later, Richelle’s childhood friend—who she now refers to as Mama Oon—got pregnant and asked Richelle and Ryan to parent her baby. “It was all so wild,” Richelle says. “Who would have thought those two grade 9 girls would end up with this story?” In 2018, Richelle and Ryan adopted baby Sunnie, whose middle names are Eleanor, after Richelle’s mom, and Oonniq Alaittuq, an Inuktitut tribute to Sunnie’s birth mom and her birth mom’s grandfather. 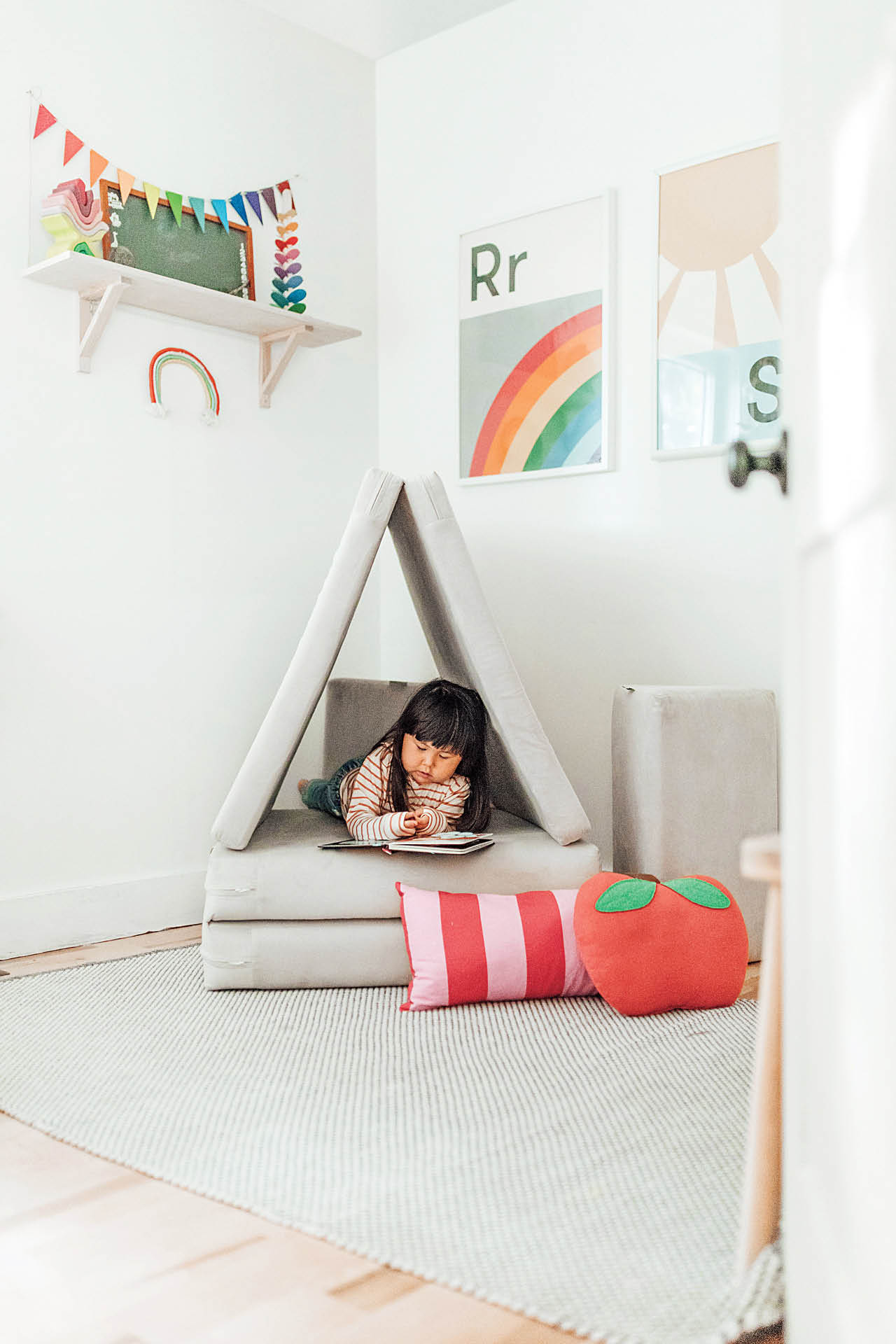 “Our home has changed quite a bit since Sunnie was born, and I love creating new spaces to serve our evolving needs,” says Richelle. Sunnie’s favourite activities are jumping on the trampoline, playing imagination games and making art—just like mom. “Sunnie loves when we paint together,” says Richelle. “It’s been very cool to watch how her approach to painting and creating has changed in the last year. I just love it.” For the Bergens, home is where the art is.

Scroll to see more of the Bergens’ cozy home. 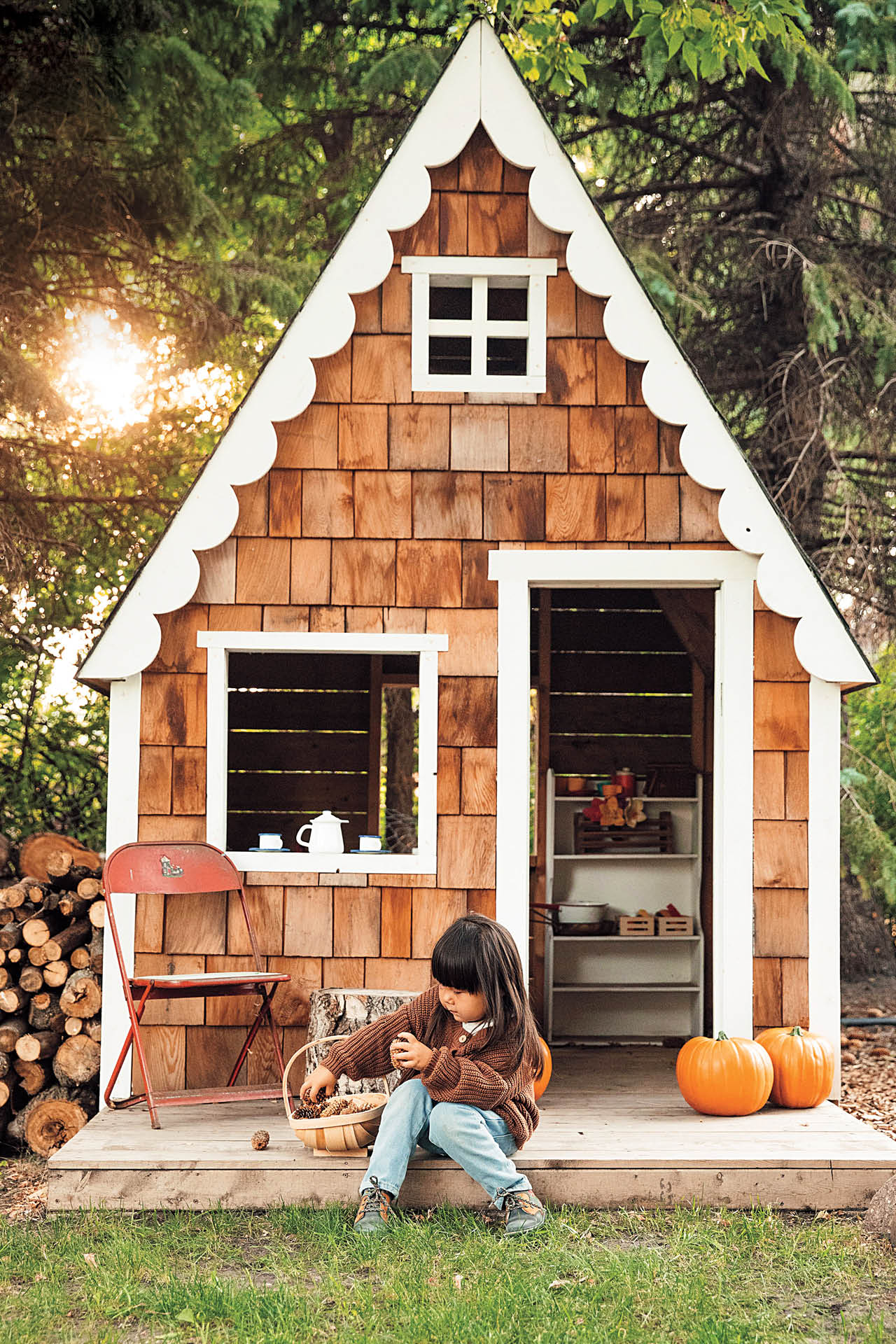 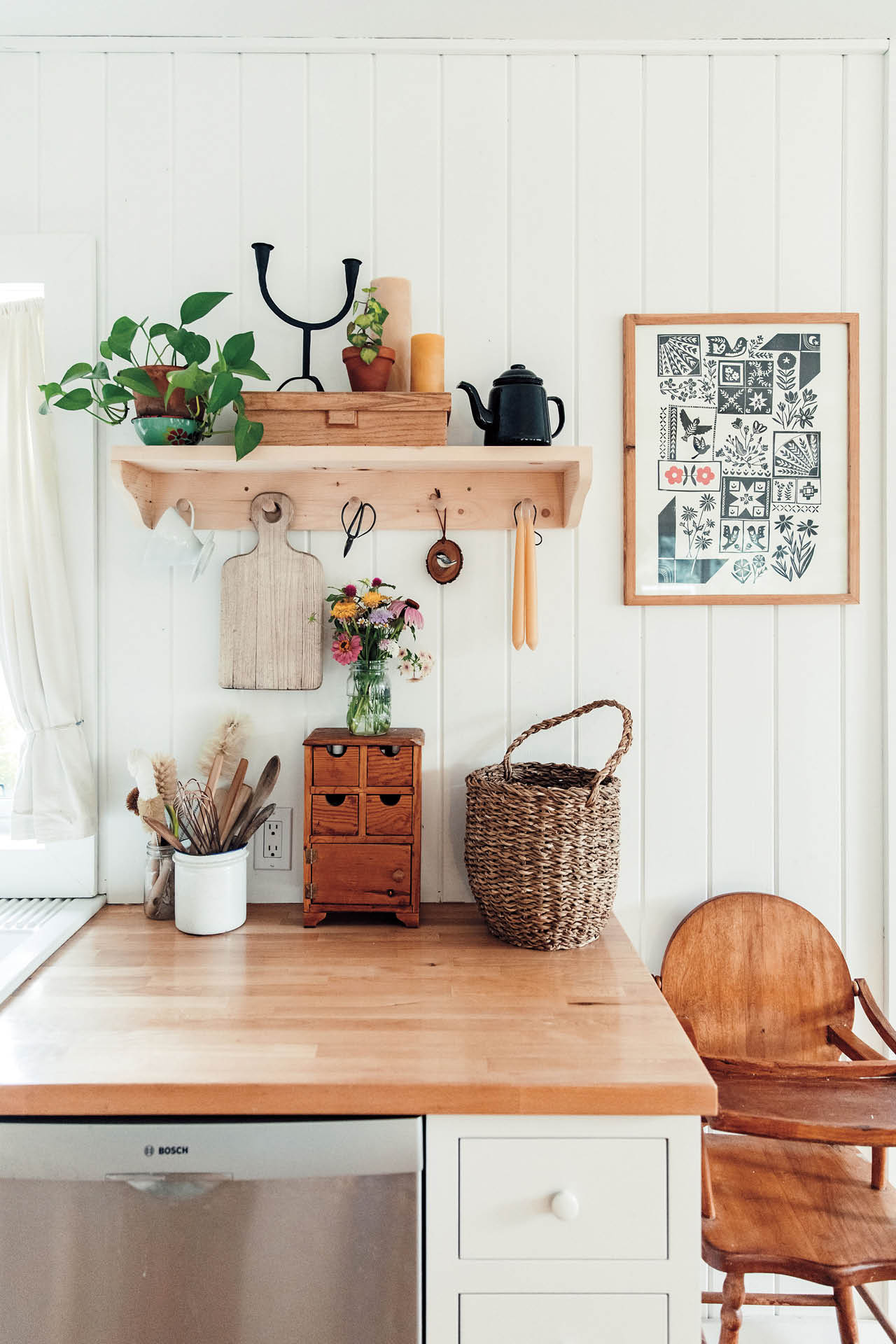 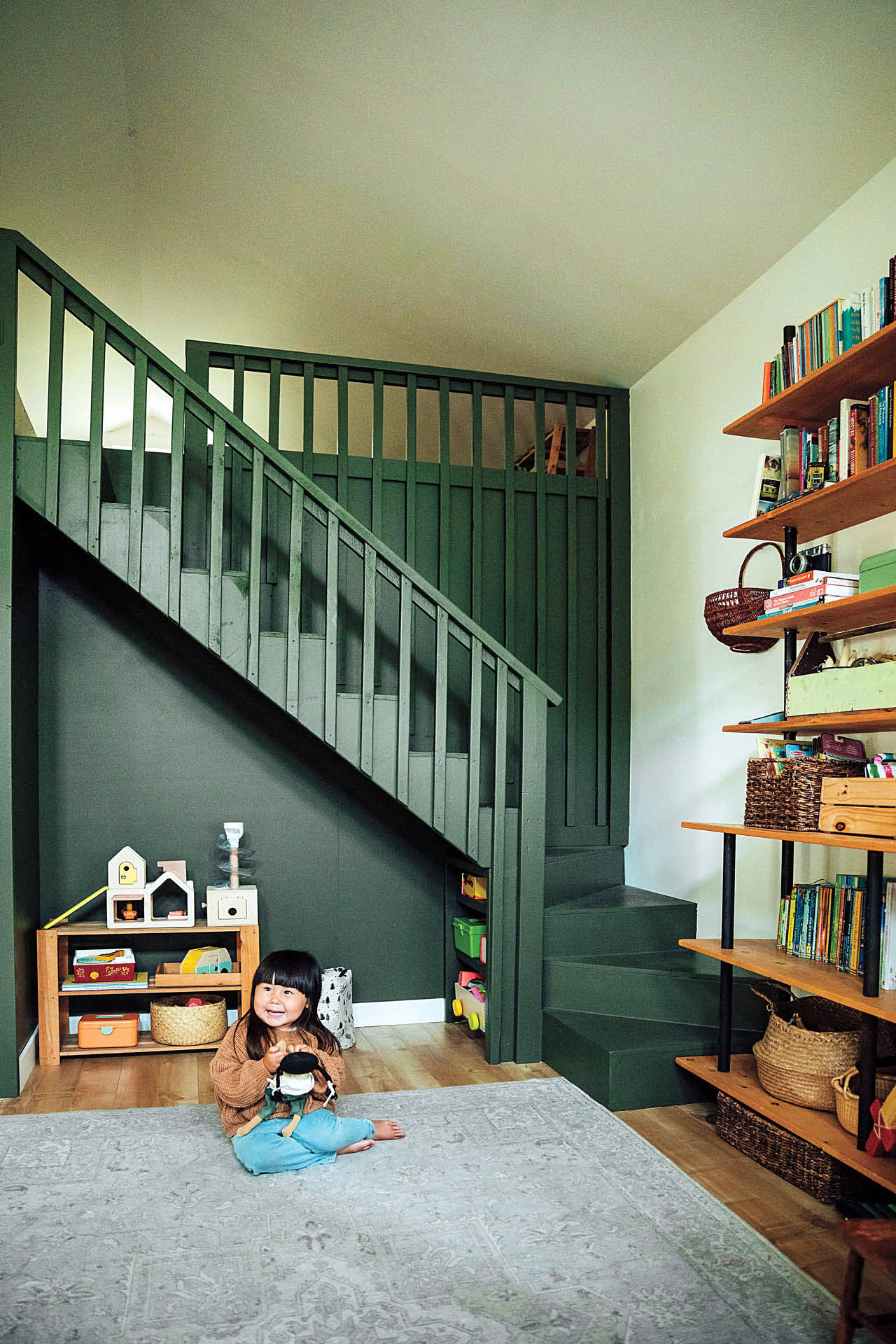 Richelle painted the staircase up to the loft where the family sleeps a dark green (Backwoods 469 by Benjamin Moore). (Photo: Lynette Giesbrecht) 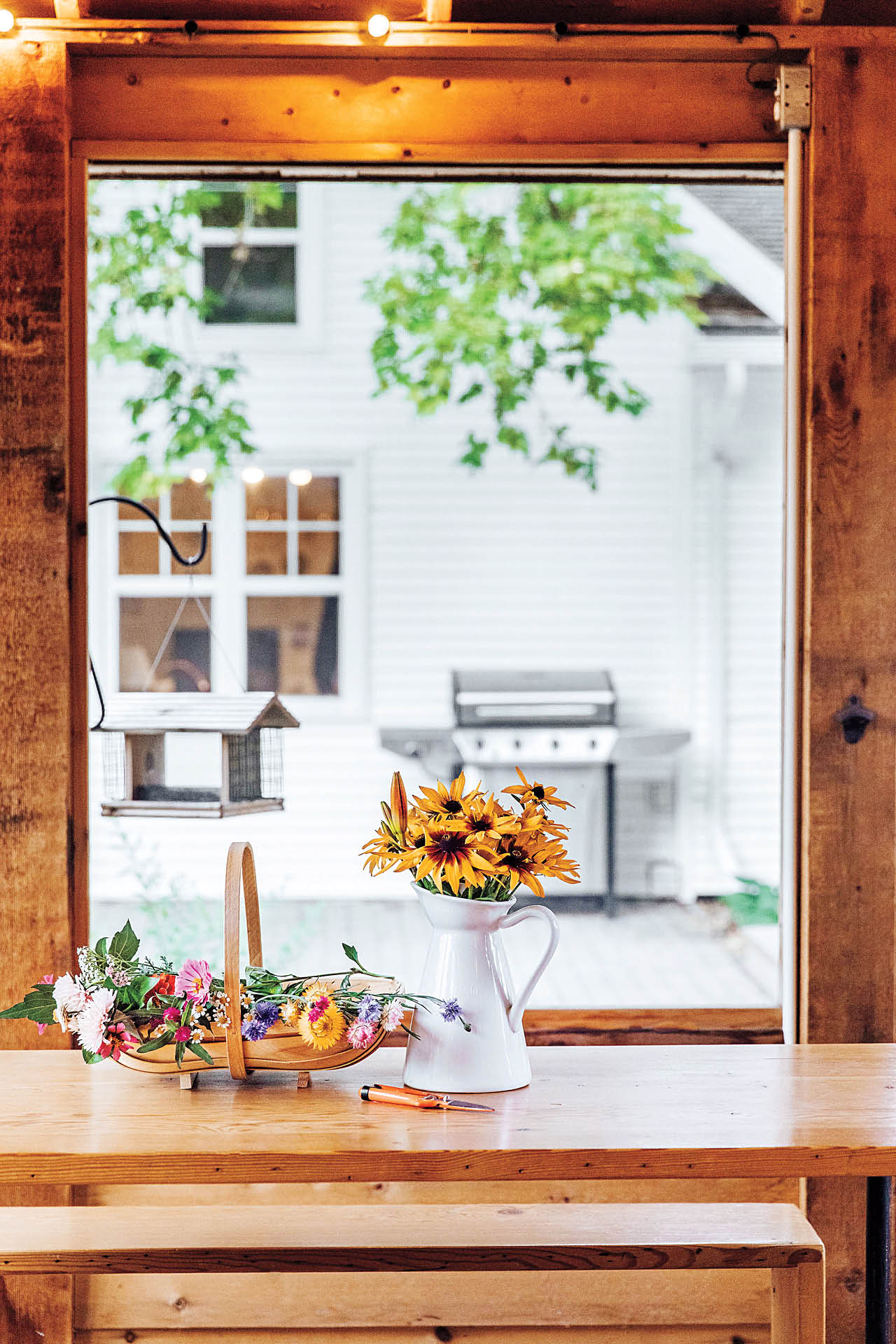 Cosmos, zinnias and bachelor buttons are Richelle’s go-tos. “They are true cut-and-come-again flowers, easy to grow and full of colour,” she says. (Photo: Lynette Giesbrecht)