Why some women feel guilty about their drinking

Ladies, we tend to beat ourselves up. And our self-loathing extends to all kinds of things — from sleeping with the "wrong" guy (or dating that same guy for a year, despite all possible warning signs) and ordering the flourless chocolate cake for dessert (after two helpings of pie!), to the raise we never asked for or the project we're happy to let others take credit for. 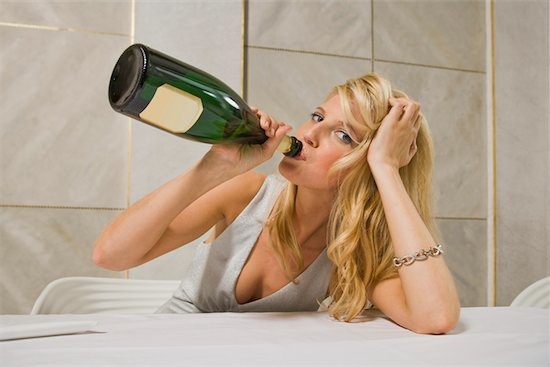 Ladies, we tend to beat ourselves up. And our self-loathing extends to all kinds of things — from sleeping with the “wrong” guy (or dating that same guy for a year, despite all possible warning signs) and ordering the flourless chocolate cake for dessert (after two helpings of pie!), to the raise we never asked for or the project we’re happy to let others take credit for.

And then there’s the drinking. When we have a glass or two too many, believe we said the wrong thing or slurred our speech, we can dwell on it for days. But we also love to savour a glass of wine with friends or get a little tipsy while flirting with anyone in particular. And I love to warm up with some bourbon on a blustery fall day. So I asked around to see how some women feel about their drinking.

Leanne drinks up to four double whiskeys in a night, which, she says, can make her feel “as good as Kim Kardashian on her wedding day or as stupid as Kim Kardashian when she announced her divorce 10 weeks later.” Rebecca told me that she didn’t even want to ascribe a number to this because she doesn’t want to see it: “Let me put it this way, when my friends buy houses and I think, “Hey, why don’t I have enough to buy a house?” I then remember, “Oh, yeah, the drinking.”

It’s rare to worry about your liver when you’re 19 and you’re chugging beer out of a plastic cup while your feet are sticking to the floor in some cheap apartment block, but health concerns about drinking start to creep in as you get a little older. Rebecca noted that her hangovers are getting much worse as she progresses through her thirties — a reminder of the body’s often acrimonious relationship with alcohol. “As I get older, my hangovers aren’t just physically taxing — they’re mental, too,” she says. “It’s like I’m starring in my very own psychological thriller! Waking up after a night of drinking usually gives me the sensation that the apocalypse is here and it was all my fault.”

But, of course, there’s a reason so many of us consume alcohol. “I remember the first time I realized, at 26 years old, that I could have a glass of wine at home by myself if I wanted; it was like winning a small lottery,” says Leigh. Rachel, who has a glass of wine most nights and more when she hits the town on the weekend, says that a couple of glasses of wine make her feel good, warm and relaxed. “I would also add that champagne makes me feel particularly great,” she says. (And I would like to second that.) She does, however, sometimes experience regret after drinking what she perceives to be too much: “The trouble is knowing your limits and sticking to them. This can be particularly challenging in certain social situations.”

All of the ladies I interviewed lead normal, productive lives and they all felt that their drinking was pretty average — even if they worried about it on occasion. Over the years, we learn certain lessons, too. Leigh steers clear of rye because it makes her crazy. “If I stick to three glasses [of wine] or less, I’m fine, maybe a little loud but I’m loud anyway!” she says. “Four glasses or more, and my filter is almost gone. I then feel like complete garbage over something I did or said, even if it wasn’t so bad. The worrying about what I did or said sometimes ruins the entire next day, even if I’m not hungover. That’s not a good feeling.”

So how do you feel about your drinking? And has it changed over the years?