Why Couples Otter Sleep Together

In praise of couples who sleep together — in sickness and in health. 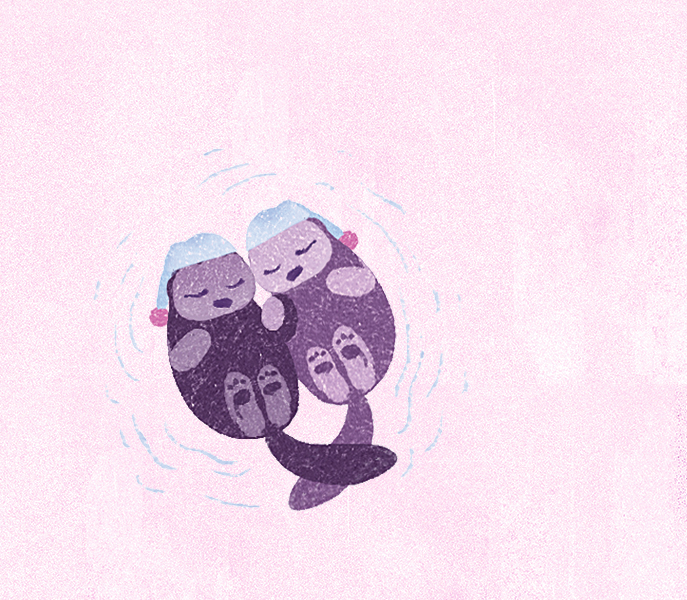 Arianna Huffington’s The Sleep Revolution spent weeks on the best-seller list, which means at any given moment, thousands of droopy-eyed North Americans were thumbing through its pages, desperate to absorb any tidbit of wisdom that might lead to more shut-eye. But there is one tip from the self-crowned sand(wo)man I can’t get behind: that when it comes to the bedroom, couples should think about going their separate ways.

Couples started sleeping together out of necessity, she writes — in pre-industrial times, furniture was expensive, and pre-electricity, the dark was less scary if you had a bed buddy. Now, one of the reasons we cling to the idea of the marital bed, she says, is that everyone fears becoming the couple that doesn’t have sex. But “like a horror movie in which the police dramatically announce that the menacing phone call is coming from inside the house, we now realize that the primary nighttime danger to our sleep is all to often coming from inside the bedroom, in the form of a partner with very different sleep habits.”

She’s not the only one who’s endorsed this idea — the internet is rife with headlines about the benefits of solo slumber. And of course it makes sense — who doesn’t sleep better when they’re not getting karate kicked in the back by a stray leg? But for me, the cost of sleeping in different beds outweighs the reward.

My partner and I have a running joke: At about 9 p.m., when we finally come face to face after racing our young daughter to school, hustling to and from work and through the dinner/bedtime rush, we stop, make deliberate eye contact and say, “good morning.”

It’s one of those “jokes” that’s not funny at all, but an acknowledgment that if we are neglecting each other during the day, it’s not by choice, it’s just our stage of life. We have lots of places we can go when we need to be alone, but sharing a bed ensures that at least once a day we are alone, together — even if it’s just to take comfort in some sweet silence. When we don’t sleep together, it only takes a few days before the distinct feeling that we’re drifting apart sets in.

Granted, if my partner was a heavy snorer or prone to crazy night terrors, I might feel differently. But at this point, instead of decamping to the guest room in the relentless pursuit of peak sleep, I prefer to take my cues from sea otters. These semi-aquatic (and adorable) mammals are known to sleep in the water holding their partner’s paw, so that the current doesn’t force them apart. I’ll take that over a good sleep any night of the week.