When chronic fatigue has you sleeping on the job — literally

Empowered patient: When exhaustion is more than just being tired, getting to the bottom of it can be overwhelming. But medical breakthroughs and a new name are offering hope to chronic-fatigue sufferers 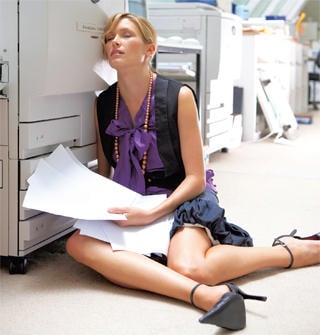 Eleven years ago, Carol Davis* had heart surgery. She was 41 and needed the operation to correct a heart murmur she’d had since childhood. While the procedure was a success, Carol didn’t feel like herself afterward. Instead, she was suddenly tired all the time. Like really tired. “And I wasn’t as sharp as I used to be at work. I kept forgetting basic things,” she says. She also noticed that her stomach was often upset, and she developed a nagging sore throat. Next came the migraines, which she’d never experienced before.

At first she blamed her poor health on a hiatus hernia, for which she had a second surgery four years after the first one. “But when I turned 45, everything exploded,” she says. The Edmonton mother had a busy career in finance, but her work started to suffer. All of a sudden co-workers talked too fast, lights and noise bothered her and it took ages to do simple things like send email.

Carol began seeing her doctor every month in a desperate attempt to figure out what was wrong. At one visit, she picked up a magazine in the waiting room, read a story about chronic-fatigue syndrome — and recognized many of the symptoms. But when she asked her doctor about it that day, he replied: “It’s a very complicated illness, and I don’t know anything about it.”

Why is chronic fatigue so misunderstood?

Extreme, chronic fatigue isn’t new — it’s been traced back to 1400 BC — but the condition is still misunderstood by the medical community, says Eleanor Stein, a medical doctor, psychiatrist and clinical assistant professor at the University of Calgary. “Though many doctors have heard of it, it’s hard to diagnose due to a lack of knowledge.”

In fact, many Canadian doctors know so little about the condition that they still call it chronic-fatigue syndrome. But the name isn’t technically accurate, says Stein. The correct term is myalgic encephalomyelitis, or ME for short. (Myalgia means muscle pain; encephalomyelitis means inflammation of the brain and spinal cord.) No one knows exactly what causes it, but it’s believed to be due to a number of factors, including genetics, infection and triggers (like surgery or undue stress) that combine to produce extreme fatigue, pain and often debilitating illness overall.

In 2005, Canada had 334,000 people living with ME, and according to Stein, there are few doctors who treat it. Stein is one; Alison Bested, who works out of the Environmental Health Clinic at Women’s College Hospital in Toronto, is another. It’s more common in women, says Stein, but, once again, no one knows why. “That’s a huge question,” she says. “And I really wish someone would put that on the research agenda.”

Most people with ME have symptoms similar to Carol’s: excessive fatigue, severe exhaustion after exercising, poor sleep, impaired concentration and general malaise, including frequent sore throats and headaches.

Why myalgic encephalomyelitis is difficult to diagnose

There is no diagnostic or laboratory procedure to confirm the disorder. According to Bested, co-author of Hope and Help for Chronic Fatigue Syndrome and Fibromyalgia, to properly diagnose a patient, all other conditions (such as multiple sclerosis, lupus, Parkinson’s, iron deficiency, rheumatoid arthritis, and depression) must first be ruled out. Then, if the patient has had the symptoms for at least six months, a doctor can officially make a diagnosis. Bested says it can take anywhere from two to 17 years to get diagnosed, and she estimates only 20 percent of patients actually get a correct diagnosis.

When Carol’s doctor admitted he couldn’t help her, she logged on to the website of the College of Physicians & Surgeons of Alberta to find a new physician. She had reached the point where she could barely function. “It felt like my brain cells were covered in molasses — and the more I tried to use my brain, the thicker the molasses got,” she says. “Then it affected my ability to find words, and my memory.” In early 2007, seven years after her symptoms first showed up and five months after she began searching, she got an appointment with a new doctor. “I basically crawled into his office,” she says. He diagnosed Carol with ME.

Carol’s new doctor made her stop working immediately. She spent the next six months at home, practically bedridden. “Gone were the days I could take things for granted,” she says. “Doing dishes, getting dressed, even going out for dinner was too much for me. Taking care of myself was a full-time job.”

Many people with ME aren’t just unable to work — they’re unable to meet basic needs. “Nearly 20 percent of them don’t have food in the house — they don’t have the energy to shop or cook. Some need help in the bath, and some are so disabled they live in nursing homes,” says Bested. And many are diagnosed not just with ME, but also with fibromyalgia (pain in muscles, ligaments and tendons) and chemical sensitivities. Although ME and fibromyalgia are different, Stein says it’s likely a genetic disposition that causes a person to develop both. Jeanne Samonas, 54, from Toronto, was first diagnosed with fibromyalgia in 1998. A car accident two years later left her unable to even wash her hair. Eventually she was also diagnosed with ME and chemical sensitivities.

These sensitivities mean her husband can’t drink coffee at home and her three sons can’t use scented shampoo. If they do, she can’t breathe. More frustrating, though, is the social stigma she faces. “People are very negative,” says Jeanne. “They say, ‘You don’t look sick’ or ‘I’m tired too. I have kids and I work full-time; you don’t have to tell me about being tired.’” Except it’s not the same, Carol says. “I’ve given up more than 50 percent of my life,” she says. “Are people without ME tired to the point they’ve had to give up 50 percent of their lives? Have they given up their jobs? Their social lives? Caring for their children? There’s a big difference between being chronically tired and just being overtired.”

While no cure exists, there are ways to control ME. Bested has patients make lifestyle changes that help them regain at least part of their lives. She calls her program SEEDS. “We weed out the aggravators, then we plant the ‘seeds’ of health,” she says. The treatment includes:

Sleep: ME patients often miss stages 3 and 4 of deep sleep. So Bested teaches good sleep practices, including going to bed and waking up at the same time every day, sleeping in a dark room (or wearing an eye mask) and blocking out noise with earplugs.

Exercise and pacing: Although patients are advised not to overdo it (vigorous exercise can make the condition worse), some can benefit from activity, Bested says. She has patients keep an activity log and pace themselves, paying attention to their energy levels. For instance, getting groceries one day might mean a person with ME has to wait a day or two before going out for coffee with friends.

Environment: Reducing toxins at home can relieve sensitivities, including using baking soda, water, and vinegar to clean, choosing fragrance-free products and replacing old carpeting, which can be a source of mould.

Diet: When you lack the energy to get out of bed, your diet suffers. Bested makes sure patients eat three meals a day, including lots of vegetables, fruit, lean protein and whole grains.

Support: Help with tasks like cooking and laundry is hugely beneficial. Support groups also allow patients to cope with the disease’s psychological effects. Carol and Jeanne are both active in support groups. “Just talking to people who’ve had similar experiences helps,” says Carol. “It allows you to see the humour in it — like joking that I have a drawer full of 50 pairs of panties because I can’t do laundry.”

Now that she’s being treated, Carol is hopeful about the future. “I have more control,” she says. “Learning exactly what the illness was made sense to me. I’m dealing with it, and that makes a world of difference.” And while she still struggles with the symptoms, she’s no longer afraid. “When you’re having cognitive issues, you think there’s something horribly wrong with you. Now, I’m not as fearful,” she says.

Jeanne believes proper treatment is key. She’s now using her experience to help others. (She volunteers with the ME Association of Ontario and is chair of the International Awareness Day for Myalgic Encephalomyelitis.) “I’ll never be what I was before, but I’m feeling much better,” she says. “I want to use my knowledge, understanding and compassion to help others who are in a dire situation.”