Why we love talking about ourselves so much

A new Harvard study shows just how pleasurable it is for our brains when we're talking about ourselves. 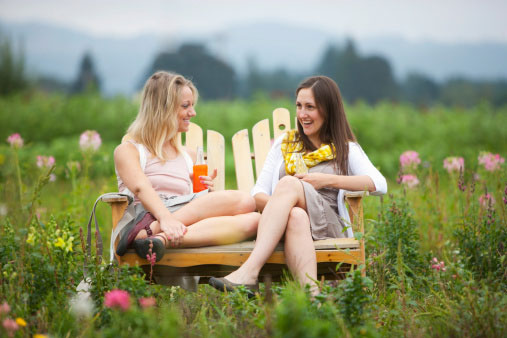 You love her, your good pal of many years and share innumerable inside jokes. But man, does she like to talk about herself! A lot. If her self-absorption weren’t so exasperating it might even be considered impressive — almost a talent.

You could be experiencing a breakup, bankruptcy and a blush-inducing bout of adult acne (all during the same week) and she’d still be rambling on about how much she hates her job, her landlord and her inner thighs.

It’s enough to drive you to distraction sometimes. But don’t be too hard on her. Instead, chalk up a healthy portion of her me-talk to our imminently flawed human brains, which, according to recent research, appear to be hardwired to make us self-focused.

Researchers at Harvard University have concluded that talking about oneself isn’t just a way to process emotion or pass the time; MRI scans indicate that it’s a pleasurable experience that excites the reward centre of the brain. The effect is akin to the enjoyment we experience when we dig into a piece of chocolate cake or have sex.

Kind of like eating potato chips, once we start talking about ourselves, the pleasure centre of the brain starts firing, making it hard to stop. (Eat a bag of chips and talk about yourself at the same time and prepare to enter a narcissist’s nirvana.)

How powerfully addictive can talking about ourselves be? Surprisingly, most people will choose to talk about themselves over making a financial profit. One of the tests the Harvard researchers performed gave participants a choice: answer questions about someone else and you get four cents or answer questions about yourself and make only two cents.

The majority of the participants chose the two-cent option.

While you may not want to try and bribe your friend into keeping her self-involvement to baseline selfish levels — if you do, though, you may need to up the stakes beyond four cents — you may want to be grateful for those people in your life who do their level best to keep their brain’s reward centres in check. Clearly it’s not easy being a good listener — it’s almost against our nature. Those who manage to be so, despite our selfish brains, deserve a hefty slice of chocolate cake at the very least, don’t you think?