Researchers around the world say we’re in the midst of a loneliness epidemic. In fact, those of us who live in cities may be at a higher risk. 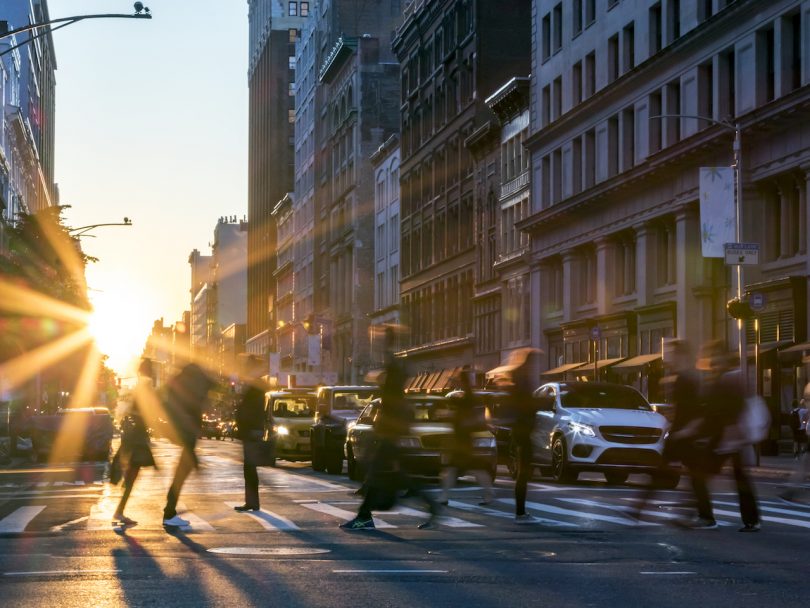 It was mid-December and Cuenca, Ecuador was sparkling with festive lights. I was standing at a crosswalk with a woman I had befriended earlier that evening at a Christmas party. After a brief conversation about how we both ended up in South America, we’d ducked out to grab some food. Now, as we made our way back, she took a drag of her cigarette, exhaled a Santa beard of smoke and invited me to a dinner party the following night, saying, “I have two dogs. Big ones. They’ll rush you at the door, but they’re friendly. I’m cooking a chicken. Bring a side, wine or beer. I love good beer. I’ll text the address. Will you come?”

I’d arrived in Cuenca two months before, and this was just the latest example of the city’s friendliness—a stark contrast to the life I’d left behind in Toronto. Here, hellos didn’t come with an arm’s-length handshake but rather with a hug and a kiss on the cheek. Strangers always asked me about myself. Neighbours offered rides in their cars. My landlady never failed to ask about my afternoon run. When I left Toronto after living there for eight years, I wasn’t sure what I was looking for. But here was the answer: community.

That’s something I didn’t have at home—and, it turns out, I wasn’t the only one. Scientists and world leaders are starting to refer to a loneliness “epidemic.” The New York Times reports that about half of Americans reported feeling lonely—and 13 percent say no one in their life knows them well. And in the U.K., the problem was bad enough that then-Prime Minister Theresa May appointed the world’s first Minister for Loneliness in January 2018. Here at home, 28 percent of Canadians now live alone, which is the highest number on record and a risk factor for loneliness.

All of this social isolation can have a real impact on our health. A 2015 study out of Brigham Young University found loneliness was as big a risk factor for early death as smoking 15 cigarettes a day, making it a bigger health risk than obesity and a sedentary lifestyle. And, according to the U.S. National Institute on Aging, research has linked social isolation to other ailments, like high blood pressure, heart disease, anxiety, depression and even Alzheimer’s disease.

When I lived in Toronto, I never realized how lonely I was. I’d moved to the city for school and stayed after I graduated, but as the friends I’d made moved away, I was left with a gaping hole that I tried, unsuccessfully, to fill. I swiped right and became familiar with the communication cop-out that is ghosting. I went to parties with seemingly impenetrable Toronto cliques and felt like a permanent fringe friend. I did have meaningful friendships, but in my experience, Toronto is a place where community ranks lower than one’s job, relationship and personal commitments. From an organizational standpoint, last-minute weekend plans don’t fly. I’d get a barrage of “Sorry, I’m busy!” texts. Once, after receiving three in quick succession, I broke down into tears.

According to Tom Barwell, a Toronto therapist whose focuses include loneliness, I had been experiencing all the elements necessary for social isolation to kick in: I’d been looking for a sense of belonging, my interactions felt replaceable and I didn’t feel known, seen and heard. People who live in urban areas are particularly vulnerable. “A lot of people find it to be a depersonalized space. Interactions are brief and often commercial, and they feel repeatable,” he says. “It doesn’t feel personal.”

Barwell says there are several factors specific to large North American cities that make things even harder: the cost of living is higher, meaning more of us are tied up at work for longer (and when we’re not, we’d rather just chill); we live in neighbourhoods that offer plenty of anonymity; extended family members don’t bunch together as they used to.

By contrast, life in Ecuador is incredibly social. Sure, Cuenca is a city, but it’s much smaller than Toronto, and the South American way of life (people-focused and slower paced) makes it easier to navigate. As a result, I don’t have to book friends the way I’d book an eye exam.

For a while, I was convinced that the difference in my social life was Cuenca. After all, finding my place should have been harder here: I live alone, I’m a freelancer who works from home, I’m still learning the language. The fact that loneliness hasn’t struck under these conditions lead me to believe that social isolation isn’t so much situational as it is cultural.

Months after the Christmas party, I found myself sitting on one of Ecuador’s many sunny beaches, reflecting on the unlikeliness of my friendship with my cigarette-puffing amiga. We’re a decade apart, from different countries, and our interests don’t overlap. Despite this, our bond feels strong, something I attribute to luck.

Barwell, however, doesn’t. Sure, there are many reasons why a person might feel alone in Toronto, but I may have also given Ecuador an unfair advantage, he says. “Obviously, the environment you went to is different. But were you [also] more adventurous or a little bit more open? Were you interested in learning the language and as such learning about other people?”

The answer is yes, though I’m not willing to let Toronto off the hook—it’s worth thinking critically about what kind of culture we foster. Are we Canadians as inclusive as we like to believe? Do us city people prioritize important relationships as frequently as we tell each other how busy we are? But, I don’t get off scot free either. Barwell also pointed out that openness and self-examination are part of the solution… regardless of where you’re located. That’s a big part of the equation I’d been missing.

I could easily have been lonely here, too. I had debated turning down the offer of the woman who, after knowing me for 30 minutes, insisted I come to her dinner party. But, I was more open to other people. It turned out, she wasn’t lying about her dogs. They did rush me at the door and they are super friendly. She wasn’t lying about her love of good beer either. We’ve shared several over the past months—and formed a close friendship where I feel known, seen and heard.

Sinead Mulhern is a Canadian journalist and full-time freelance writer based in Cuenca, Ecuador. In early 2018, she quit her editorial job, left Toronto for South America and has never looked back. Sinead writes mainly personal essays, travel and lifestyle stories with her work appearing in titles such as Toronto Life, The Daily Beast, G Adventures blog, Stylist, Canadian Running, Best Canadian Essays and others. When not writing, she’s off exploring in the Andes.

Sinead Mulhern is a Canadian journalist and full-time freelance writer based in Cuenca, Ecuador.