The 10 best dating tips for all the single ladies

Looking for that special someone, but not sure how to play the dating game? Here's the need-to-know advice from the relationship experts 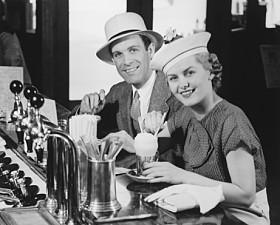 Valentine’s Day can have a fairly universal gag-effect for those of us who aren’t in long-term relationships. But whether you’re alone at home eating ice cream and re-screening Bridget Jones’s Diary (possibly rewinding several times that scene where Mark Darcy tells her that he likes her “just as you are”), or out for some spicy tapas with great friends, or babysitting your nephew, doesn’t mean you can’t spend a little time reflecting on how you might step up your dating game.

1. A little compassion can go a long way: Maia Szalavitz, co-author of Born for Love, says that kindness is one of the top qualities sought by both men and women. “Though it’s obvious that guys walking dogs or [playing with] babies attract women, men also seek evidence of nurturing,” she says.

2. Break your routine to meet new people: Once you’re out of school—with its seemingly limitless supply of drunken encounters and early morning regret—it gets harder to meet people. Dating expert Kateryna Spiwak recommends taking up new hobbies and interests, joining clubs, volunteering, networking, and trying singles services. “Even eating in new restaurants and walking through different neighbourhoods can bring you face-to-face with the person of your dreams,” she says.

3. Be aware of your body language: Actions often speak louder than words, so be conscious of what you’re conveying with physical cues. Sex therapist Dr. Teesha Morgan recommends sitting with an “open” body (turned towards your date with arms uncrossed) and trying to subtly mirror his movements. Casual touching of his arms or back can score points, but don’t overdo it. You’re going for the “sensual subliminal” vibe, not the “I just got out of prison” vibe.

4. Ask questions: Sometimes, it’s easy to get so wrapped up in whether you’re making a good impression that you forget to engage the person across the table. “Someone who asks questions is seen as interesting and attractive on first dates,” says Terri Orbuch, relationship advisor and author of 5 Simple Steps to Take Your Marriage from Good to Great. But like a friendly game of badminton, it should be an easy, back-and-forth volley; if your date starts spiking the shuttlecock, maybe pass on dessert.

5. Don’t talk about your ex: “No one wants to wonder whether their new partner is still smitten with his or her ex, or whether they, too, will end up on the receiving end of a mouthful of hatred,” says Morgan. So check your breakup baggage along with your coat, and instead spend the first few dates explaining your issues with your mother. Just kidding. Relax and simply try to get a decent picture of who your date is.

6. Be who you are: We’ve had it drilled into our heads that playing hard to get is the way to land Mr. Right—or, at least, Mr. Refuses to Meet My Friends Even Though We’ve Been Dating for Six Months. “But by acting hard-to-get, when in fact what you truly crave is closeness, consistency and stability, you stand a good chance of attracting the exact person who is least likely to make you happy—someone who prefers to keep you at arms length,” say Rachel Heller and Dr. Amir Levine, authors of Attached.

7. Give the dude a chance: A lot of ladies have lists of the qualities they want in a mate, either tucked away in some corner of their brain or perhaps drunkenly scrawled on a cocktail napkin after too many fingers of bourbon. But Spiwak says such lists can be unrealistic and limiting. “Don’t get too hung up on your list,” she advises. “Chemistry’s unpredictable, so you might find it where you least expect it.”

8. Look for similarities: The attraction of opposites is a common dating mantra—not to mention the basis of an excellent pop song by Paula Abdul—but that doesn’t mean it’s true. “It is very common to be attracted to the wrong type of person,” says Orbuch, “[and] typically this happens because you are fascinated with people who aren’t like you.” But studies surrounding relationship longevity indicate that you’re more likely to be happy with someone who shares your values and attitudes.

9. Don’t give in to bananas behaviour: “It’s easy to fall into the trap of being fascinated by emotionally unavailable men, while viewing the available, nice guys as boring,” says Heller. Levine and Heller caution ladies to remember that the best relationships are ones that make you feel secure and cherished, not constantly rejected and emotionally plundered.

10. Keep your chin up: After enough rides on the carousel of dating disappointments, it can be easy to develop a bad attitude. “Don’t let a bad date get you down,” says Spiwak. “Instead, see if you can learn from it, then move on.” Try to have fun and open yourself to meeting someone new—even if he or she is not the person of your dreams, they might have a younger, cuter sibling who is.