Remembrance Day: A time to be thankful, not happy

For me, I’ve always had a global view of Remembrance Day. While I was born in Canada, my view comes largely because my parents are both World War II survivors and immigrated to Canada in 1969. 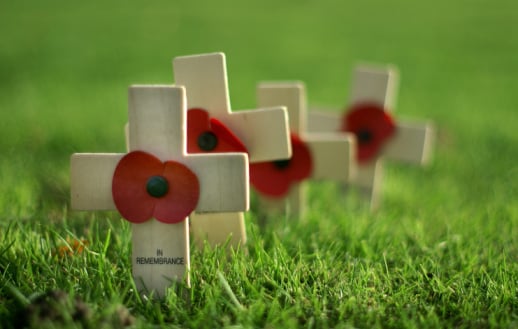 “Is this really the beginning of the long-awaited liberation? The liberation we’ve all talked so much about, which still seems too good, too much of a fairy tale ever to come true? Will this year, 1944, bring us victory? We don’t know yet. But where there’s hope, there’s life. It fills us with fresh courage and makes us strong again. We’ll need to be brave to endure the many years and hardships and the suffering yet to come.” –Anne Frank: the Diary of a Young Girl

It’s November 11th, Remembrance Day. So why start the post with a quote from a book about a young Dutch girl in hiding during World War II? For me, I’ve always had a global view of Remembrance Day. While I was born in Canada, my view comes largely because my parents are both World War II survivors and immigrated to Canada in 1969. So growing up, I heard their stories and memories, many of which are just too sad to share. But some, such as my mother’s aunt teaching my mother lessons in secret because she couldn’t go to school during the war, seemed exciting and fascinating to me when I was younger. “I love hearing the stories about the war,” I said to my parents one morning over breakfast. “The war wasn’t fun!” my dad snapped and left the room.

I go back and visit the Netherlands every few years to see family, and during those trips, it always saddens me in a way to see the city of Rotterdam, around which so much of my family is based. Unlike the country’s capital, Amsterdam, which is jammed with beautiful, old three-story houses, Rotterdam is a newer city. It features more modern architecture thanks to the fact that it was virtually blitzed to bits by bombing during the War. And when I see my cousin in Amsterdam, who in fact lives not far from Frank’s house, it reminds me of Frank’s sad end—her and her other hidden roommates were taken from their Annex hideaway and Frank and her sister later died from typhus in the Bergen-Belsen concentration camps.

But here at home, this day of course, also has me thinking of what Canadian soldiers have done for us worldwide. If anything, I think my European roots give me a deeper sense of war and I can truly appreciate gestures such as the Canadian Tulip Festival held in Ottawa every May, an event that symbolizes Canada helping liberate the Dutch during the war, and is also an annual thank you gift from the Netherlands for harbouring Princess Juliana and her family during the World War II.

And now, building on that knowledge and appreciation, we have another generation of soldiers to think about today—especially in light of Prime Minister Stephen Harper’s suggestion that our troops might stay in Afghanistan longer than 2011.  So today is not a day nor a post about happiness necessarily. More thankfulness. Thankful that people, such as my parents, did survive World War II. Thankful for the efforts of our troops and their roles in various wars–an intricate concept I now struggle to explain to my children. While at school my oldest child is learning about the historical significance of Remembrance Day, drawing pictures of “coquelicots” or poppies and seeing me buy poppies to wear on our coats, I wonder—how much do I let them know?  I’m fine with letting them know why we have troops overseas, but admittedly I shut off the radio when it comes to hearing about the deaths of Canadian soldiers. How do I explain unnecessary deaths to them when I don’t understand them myself? How do I explain what their grandparents went through? Perhaps it’s a discussion for another year, when I can figure out how to explain the why.

So between my European roots, and my Canadian home, I remain thankful today for the efforts of troops worldwide and war survivors worldwide. As Frank so intuitively pointed out, we need to brave to endure the suffering that will continue.