Parenting My Way Through An Anxiety Disorder

I’ve always been anxious. But when I had kids I was determined to keep it under wraps. Easier said than done. 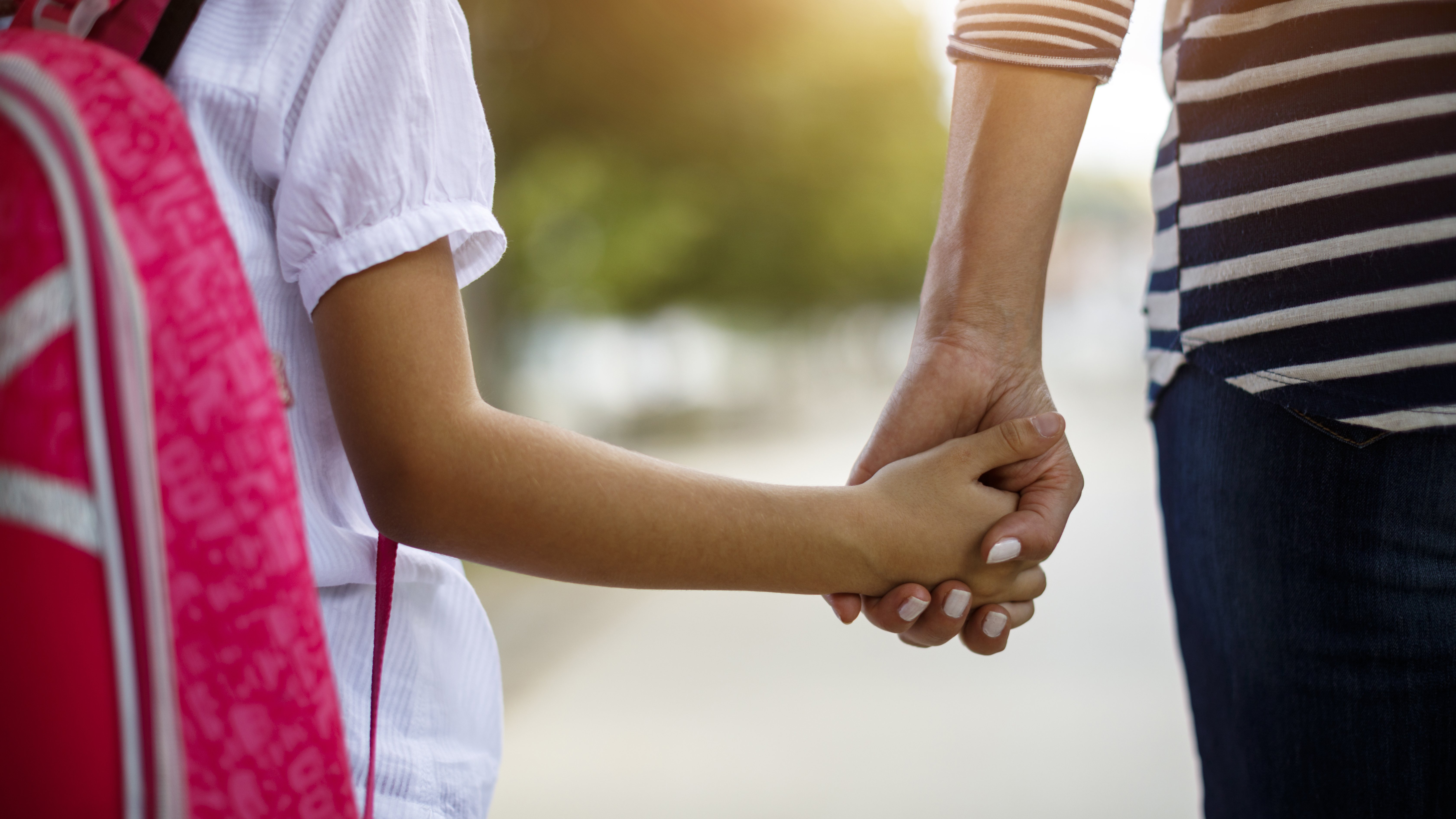 I got my G1 learner’s licence for the third time when I was 48 and figured I had five years to overcome my fear of the road. But somehow it never felt like the right time to get behind the wheel—never mind take a test. The years ticked by. When I received notice that my five-year G1 had expired, I felt the way I always do when I run from the things that scare me: relief in the short term, sadness and shame overall.

I’ve been anxious my whole life. I was afraid to start kindergarten because I didn’t know how to read and write. When my parents went out at night I’d lie awake, sick with worry, until they returned. Presenting in front of the class made me physically ill. Nobody talked about anxiety back then—instead, I was deemed “sensitive.” When I finally got a diagnosis of Generalized Anxiety Disorder in my 30’s, I promptly rejected the label. Having a clinical diagnosis made me feel out of control —which only made me more anxious.

Instead, I avoided my triggers, a growing list that included elevators, subways and water that was over my head. After a late night bout with panic that ended with a call to 911 I was prescribed Ativan, an anti-anxiety medication, and started carrying it everywhere for reassurance. Meanwhile, I made excuses for why I couldn’t swim to the raft with my six-year-old niece: How could I explain my fear of having a panic attack midway and drowning—especially when the raft was only 20 metres from the dock?

But when I had kids of my own, things got tricky. I wanted them to feel safe with me at all times and I knew they were looking to me for cues. I was determined that my irrational fears not become their irrational fears.

So I faked it.

When they’d insist I look out the airplane window during take off I’d comply—even though the spinning landscape made me want to activate the emergency chute. When they’d drag me into the covered tube slide at the park and then trap me halfway down, I’d focus on the tiny sliver of visible light at the bottom. I forced myself to swim to the raft. Sometimes I’d put an Ativan in a plastic baggie and tuck it into my bathing suit in case I had a panic attack on the way.

Parenting through anxiety was profoundly hard. I wanted to get swept up in their excitement, but it was exhausting—especially when they were constantly pointing out the very thing that frightened me: “Mommy look, the plane is so high! Ooh Mommy! Look how dark the subway tunnel is! Look Mommy—look how far away the cottage is from the raft!” I’d smile gamely until the pounding of my heart drowned out their voices.

But as they grew, their own anxiety started to rear its head in small ways and it got harder to separate where mine ended and theirs began: “What if we get stuck?” my five-year-old would sometimes ask as we rode up the elevator. I’d force a laugh: “Of course we won’t get stuck silly! These elevators go up and down a million times a day!” ‘A million times a day,’ I’d think to myself, panic rising. ‘Think of all the wear and tear…’

According to Toronto psychotherapist Bradley Murray, the risk of inheriting anxiety is 4 to 6 times higher for first-degree relatives of people with the disorder, and both environmental factors and genetics play a role. I continued watching for signs that my kids might be heading for a full blown disorder and practicing my “fake it till you make it” parenting style. But increasingly, my anxiety won out.

Like the time I tried to teach them to ride their bikes on the road when they were six and nine, seeing only danger at every turn. “Watch the door!” I’d yell, practically hyperventilating, “You’re weaving! Slow down! Speed up! WHAT ARE YOU DOING??” They got so fed up they eventually got back up on the sidewalk in disgust while I continued along on the road sheepishly (secretly relieved).

Or when we rode up to the 44th floor of the Marriott hotel in NYC in a packed elevator made entirely of glass. I wasn’t okay. I squeezed my eyes shut and meditated hard while my 12 and 15 year-olds begged me to look down at the rapidly shrinking sea of ants in the atrium. I could not comply. When we got to our room I refused to look out the floor-to ceiling-window overlooking Times Square. “You don’t get it—we are SO FAR up,” they insisted. There was no getting around this one: we were on the 44th freaking floor and they were determined to share it with me. I was flooded with anxiety and I had to own it.

“Here’s the thing,” I said, attempting to face them while covering my left eye to block out the wall of windows, “I am actually not crazy about heights…” “—Just LOOK,” they said impatiently. “No, really,” I continued, growing agitated, “It makes me kind of well, panicky, and uh, claustrophobic, and—” My younger daughter wasn’t having it, “Oh my god mommy, you just have to face your fears,” she said, attempting to lead me over. I realized they had no idea how hard this was for me. I pulled free of her, fight or flight now in full effect, “NO!” I said, toddler-like—“I don’t want to! I hate heights!” Exposing my frailties to my kids felt both surreal and liberating. They finally backed off, a little bewildered.

Just knowing I was off the hook for the night regulated my heart rate enough for me to promise to look in the morning. Naturally, they held me to it. I walked slowly towards the window feeling my usual height-induced combination of dizziness and an inexplicable urge to jump, and took a quick, terrifying peek. My head swam. “We are very high up,” I concurred, before retreating to the middle of the room to lie down on the floor.

After that, outing myself got easier: Yes, canoeing in even slightly rough water made me panicky —and no, I would not be going on the “WindSeeker” with them at Canada’s Wonderland—ever. Sorry. Coming clean about my struggle with panic allowed me to show my kids that while anxiety has to be managed, it’s nothing to be ashamed of.

But, it’s also made them more comfortable pointing a finger. “Well! You gave me your anxiety!—Thanks!” said my defeated-sounding 18-year-old not long ago. My first reaction was guilt: This was awful! This was the very thing I’d be trying to avoid their entire lives! But then I realized I had nothing to feel guilty about.

After all, I didn’t ask to be anxious anymore than she did.

“Parents obviously want their children to be happy,” says Murray, “but it’s eventually important to allow anxious children to discover their own solutions to their anxiety, and to trust that their kids will figure out how their own lives will unfold.”

So I handed it back to her. “Yes, I did give you my anxiety,” I said, “And I’m sorry you have to deal with it. Anxiety has been so debilitating for me. But I’m always working on it. And that’s what you have to do too.” She just blinked. My honesty disarmed her. There was no one to blame—I gave her my anxiety the way I gave her my sense of humour and my fine hair.

I’m still anxious—each time an elevator door opens and I step out feels like a small miracle—but it’s been years since I’ve had a full-blown panic attack or carried Ativan in my shoe when I go running. So was I right to protect my kids from my anxious self when they were little? Turns out, by facing my fears, I was inadvertently working on my anxiety all along. “In your desire for your kids not to see you anxious, you were basically doing exposure therapy on yourself,” says Murray, “This kind of exposure over the course of your life, even if you weren’t consciously doing it, might have helped your anxiety get better.” In so doing, he says, I was making sure that my kids didn’t develop their own patterns of avoidance—or trying to, anyway.

Last summer, my 18-year-old told me her dad wanted to teach her how to drive. “I just can’t picture myself driving,”—she said. My heart sank. Though if I’m honest, I can’t either—when I picture her driving, I picture her crashing. But I want her to drive. I want her to sail along a highway, windows open, music cranked. I want her to be able to get herself to a goddamn Ikea if she has a sudden hankering for a swivel chair. So I looked her in the eye and told her that I wished more than anything I had learned how to drive. I told her that I came so close, but I let fear win out. I told her that it just requires practice and confidence. I told her that even though we have the same sense of humour and the same fine hair, she is not me.

Which is how I came to be sitting next to her on a recent camping trip while she drove us slowly from our site to the main road. I was anxious, I’ll admit. But turns out it’s never too late to practice a little exposure therapy.