See that picture on the left? That’s me out running in -27ºC. I posted the pic to my Facebook fan page and the general consensus revealed in the comments is that I’m bat crap crazy. 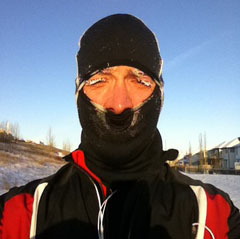 See that picture on the left? That’s me running in -27ºC. I posted the pic to my Facebook fan page and the general consensus revealed in the comments is that I’m bat crap crazy!

Whatever, I just think of myself as motivated, and with good reason. First off, this is me walking the talk. In terms of talk, I have this article to live up to. Another part is the Theory of Planned Behaviour. I wrote this article for my Los Angeles Times column that explains how registering for a race can motivate you to train for it. Well, I’ve registered for the Honda LA Marathon this March 18th, so even if it’s hideously below zero, I need to get out there and train for it.

There is also the fact that I’ve gone public. This is called “extrinsic motivation.” What it means is: I’ve told you, my LA Times readers, and a bunch of friends that I’m running this marathon. My race time and story is going to be public knowledge for a few hundred thousand readers. Tell me that wouldn’t motivate you to train for a good time.

I’ll add a caveat here. I’m still experiencing some odd foot issues after torquing it on the pedal while riding my bike a few weeks ago. It has been somewhat interfering with my training, but fingers and other body parts are crossed that I’ll be able to recover soon. I’m taking rehabilitative steps.

Now, about this hideously cold run. It wasn’t bad at all for a couple of reasons. I’ve done this before, so I’m confident in my abilities, and I’ve got the gear. I know exactly what I need to wear to stay comfortable at that temperature.

It had been a while since I’d run in weather that cold and I forgot that you don’t want to wear sunglasses in such temperatures. One reason is that the metal frame conducts cold and will freeze the bridge of your nose, and the other is that within two minutes they fog up and you can’t see a damn thing. As a result, I whacked my head on a low-hanging branch and said, “To hell with the sunglasses!” I jammed them in a pocket next to my mylar space blanket that I take in case I fall and break something to prevent freezing to death before help arrives. And yes, I had my iPhone too. That’s how I took the picture.

Speaking of that photo, notice the frosty eyelashes? That was actually a good thing. I couldn’t wear sunglasses, but the frost coating did an amazing job of cutting out the sun’s glare. Excuse me if I think that’s cool.