Why We’re (Finally) Talking About Menopause

Society's stigma towards older women is rude, and hazardous to their health. 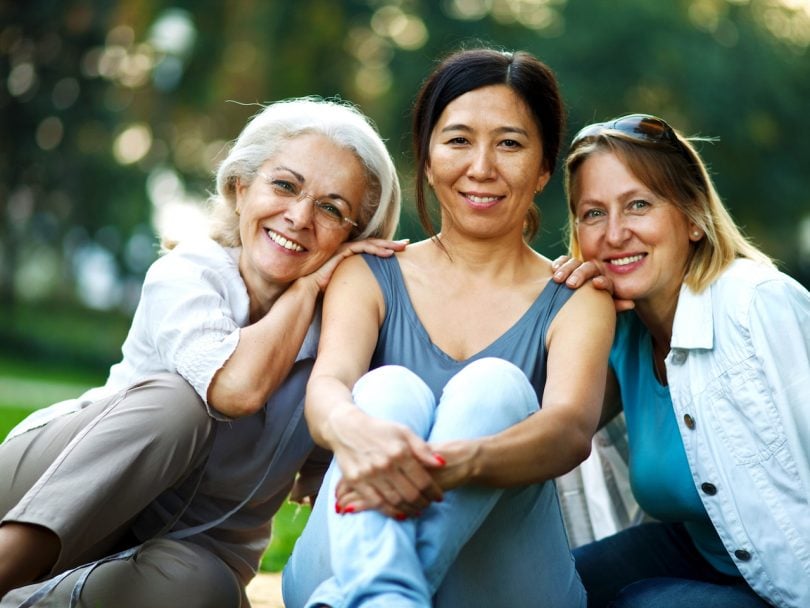 Western society–our history, literature, medical science, religion and popular culture–has always been voyeuristically preoccupied with certain milestones for girls and women. Puberty and pregnancy, childbirth and motherhood are rites of passage that elicit heartfelt acknowledgment, as well as celebration, flowery misrepresentation and debate. Meanwhile, the monumental milestone known as menopause is ignored, vilified or hidden, while the women experiencing it are made invisible or the butt of bad jokes.

This reality is explored in two recent books. Flash Count Diary by Darcey Steinke is part memoir, part essay and subtitled Menopause and the Vindication of Natural Life; while historian Susan Mattern’s Slow Moon Climbs: The Science, History and Meaning of Menopause is a comprehensive look at “the change” from pre-history to today. Both authors detail the shameful treatment and tropes of aging women, including hysterical hag, dried-up prune and sexual non-entity. And both point out how, unfortunately, women can be complicit in these representations. From Simone de Beauvoir to Suzanne Sommers, Steinke and Mattern show that women, too, have long expressed revulsion towards the female body as it leaves fertility behind.

The good news is that this fresh decade seems to be bringing a shift in this disparaging attitude. Menopause appears to be having a moment. Along with these books, there’s been a flurry of media attention in places like the Globe and Mail and the New Yorker. A New York Times piece cited a study reporting that films featuring older women in major roles had jumped 50 per cent between 2017 to 2018. Wanda Sykes discussed menopause in her Netflix comedy special, Baroness von Sketch took on peri-menopause and then, of course, there’s Fleabag (more on that one later).

Whether a trend or a blip, it’s indicative of an appetite–the entertainment industry doesn’t drop that kind of cash on a whim. And there have been real-world changes, too. Last October, U.K. national television station Channel 4 announced a workplace menopause policy made up of flexible working arrangements, paid leave and cool, private work spaces that don’t exacerbate symptoms such as hot flashes. That’s a small but concrete step in normalizing the human female life cycle. Maybe the cloak of shame surrounding menopause is finally lifting. Maybe we grey-haired women (okay, fine, I still colour mine) are actively throwing it off.


A transformation in how society sees and values older women can’t come too soon. A few years ago, I told a gynecologist that I was peeing way too slowly, that even child-sized speculums caused me to cry out in pain, and that, sexually speaking, what get called “toys” were no longer fun. After a superficial exam, she declared me peri-menopausal, used the term “atrophy” to describe what was happening to my vagina, then giggled, embarrassed. She apologized for her profession’s insensitive, disrespectful use of language.

But more than being impolite, her dismissive treatment was hazardous to my health. A recent B.C. Women’s Health Foundation report found that nearly 60 percent of women between 45 and 54 felt their physicians diminished or overlooked their symptoms. Months after I was sent away with advice to use a lot of lube, my family doctor suggested a trans-vaginal ultrasound when his pap smear stick hit a solid barrier.

The findings were sent to that same gynecologist with the hope that she’d see me immediately, perhaps ashamed by her earlier misdiagnosis. Instead she phoned, told me it looked suspicious, and referred me to an oncologist: My slow peeing turned out to be the result of a malignant tumour blocking my urinary tract. I could barely breathe, never mind take her to task on everything she’d gotten wrong–another apology she ought to have made on behalf of her profession. I’m so grateful for women like those in the B.C.-based advocacy group Menopause Chicks, who advocate for women to make their health a priority and for doctors to pay far better attention.

Actual menopause kicked in for me almost a decade ago, and I can’t really complain. My moods have swung my entire adult life, so that was nothing new, and though I had tiny hot flashes constantly for years, only a few nights required multiple changes of pajamas and bedsheets. That’s a much different experience than many women I talked to, including Lori, a 50 year-old Toronto-based policy analyst, who is suffering through a miserable multi-year period of debilitating hot flashes, weight gain and memory loss.

While it isn’t yet possible to predict how menopause will play out for individual women, our mothers’ experience can provide clues. My mom bled into her late 50s, then sailed through the rest. Lori, on the other hand, can now relate to a mortifying adolescent recollection of her own mother in a crowded movie theatre, unbuttoning her shirt and fanning herself frantically.

“Out of nowhere I’m bright red, drenched, then damp and freezing,” Lori says. “What’s hardest is having no idea if this sweaty, foggy, flashy stuff will last another month or three years.”  In the meantime, there’s life to be lived. Her approach is to be upfront: now, before offering up a goodnight hug, her 11 year-old twins ask “Are you flashin’, mom?” With work colleagues, she finds it too awkward to go along with the societal tendency to ignore menopause entirely. Lori simply points to the obvious, like her flushed face, and makes herself and others comfortable using humour.

Between physical discomfort and societal disdain, it’s hard to imagine that menopause might have an upside. But in Slow Moon Climbs, Mattern argues that there must be a good reason for women to have evolved to far outlive their ability to reproduce. Across the animal kingdom, pilot and killer whales are the only other creatures to go through menopause, which in their case is defined as having fertility end approximately halfway through life. In what’s often called the “granny effect,” older females seemed to be programmed to close down reproduction in order to devote themselves to the rearing of grandchildren.

Grandmother whales lead pods to rich feeding grounds, help other whales hunt, share fish with young novices, and protect young whales while their mothers are out foraging. There’s no way of knowing whether these cetacean Golden Girls have hot flashes or how they feel about their sagging dorsal fins. But clearly their fellow whales are grateful, not judgy, when their focus shifts away from reproduction. Unlike humans, whales seem to understand that survival of the species isn’t all about having babies, and that there’s value in older females’ experience and caregiving skills.

We older women are not usually so lucky. Faced with imminent invisibility, aging women often feel compelled to battle nature using all available medical, cosmetic and wardrobe options. The goal is to remain, if not truly reproductive, then at least appearing so. Whether topical, edible, injectable or surgical, remedies abound to keep our faces unlined, our tits at attention, and our vaginas tight.

But not everyone feels that way. The Emmy-sweeping Fleabag, for example, was lauded for a brilliant monologue delivered in its second season by an over-50 powerhouse executive played by Kristin Scott Thomas. “The f-cking menopause comes, and it is the most wonderful f-cking thing in the world,” her Belinda says to the young title character, played by the show’s creator, Phoebe Waller-Bridge. “And yes, your entire pelvic floor crumbles and you get f-cking hot and no one cares. But then you’re free, no longer a slave, no longer a machine with parts, you’re just a person, in business.”

Steinke, too, resists the idea that we are breaking down and need to be fixed. “I want to read stories about women who are electrified by their new hormonal configuration,” she writes. Flash Count Diary starts with her own ferocious menopause requiring the use of frozen corn as a coolant in the wee hours of the night, then moves to her shifting sense of gender, and gratitude at being released from the grasp of femininity. She calls it the “freedom of un-gendering,” which I might disagree with, to argue that we simply have deeply flawed, rigid definitions of gender and femininity to begin with. Even so, her willingness and opportunity to philosophize on it all is a welcome change.

I’m a bit envious of both Steinke and Fleabag’s Belinda, as I’m still caught up in a decades-long preoccupation with my desirability. There are so many better things to be mad about–global warming, right-wing populism, anti-Semitism, for starters–but too often, I turn my rage inward, frustrated with my body for not behaving or looking a certain way. Steinke argues that’s exactly where society wants women like me to put my rage. Throughout history, our anger has been deemed freakish, characterized as a demonic possession and shamed. She challenges us to use that anger more wisely, to let it help us determine what we believe in, as well as what we belong to and what we’d sacrifice ourselves for.

The fountain of youth is the original fake news, and seeking it will always keep women down and distracted. The bottom line is we were designed this way. It’s all normal, and life expectancy data indicates that we still have decades of stuff to get done once the bleeding stops. The last thing we need is fitted jeans restricting our movement. Let’s take our cues from the mob guys on The Sopranos and pull on some sweatpants, using the cloak of invisibility that’s been thrown over us to invigorate the world with our collective menopausal rage and wisdom.