At 102 years old, Katharine Weber is still seeking out new adventures. Find out the eight secrets to a longer, healthier and fuller life 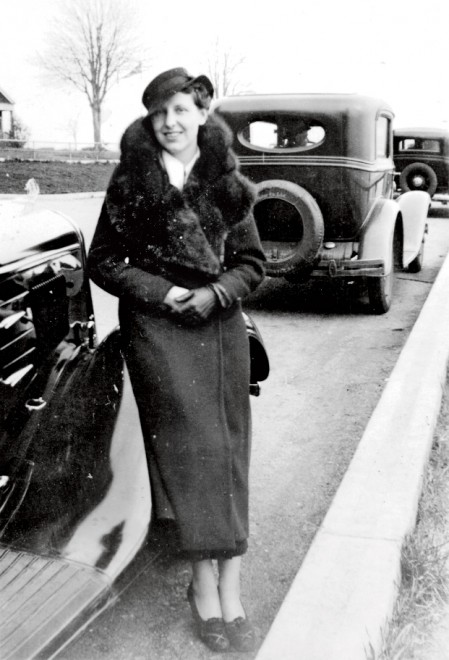 Katharine Weber was born the same year a test aircraft, with wings of steel, silk and electrical tape, took off from an ice field in Baddeck, Nova Scotia. It was 1909, and it’s fitting that Katharine, who would become an intrepid world traveller, should share her birth year with Canada’s first flight.

Katharine celebrates her 103rd birthday this month. And a look at her life shows just how much can happen in a century. She was a child when tanks rolled across French battlefields in the First World War, she survived Canada’s Spanish-flu epidemic, and in her 20s was a secretary for a shipping company during the Great Depression.

She got married at 38 and, craving adventure, jetted off with her new husband to the Colombian rainforest in South America, where they lived until Katharine became pregnant with their first of two sons. Later, after her kids left home, she started travelling in earnest, with trips to Russia, Europe and Australia. At 82, she walked the Great Wall of China.

Often when we think of the elderly, we think of the frail and infirm, the grouchy or senile. We see aging as a losing battle, but Katharine is proof that it doesn’t have to be. She lives in the same house in Winnipeg where she raised her sons. She’s always been an avid gardener and last summer enjoyed fresh tomatoes from her backyard. She even entertains weekly and calculates her taxes at the close of every year.

On her 100th birthday, Katharine’s younger son toasted her full life. “When I think of how it must feel to live through general strikes, pandemics, world wars, cold wars — and two sons — my first thought is, I’d need some rest,” says Thomas Weber. “But I look at Mum, and she’s still going strong — sometimes baking cookies or on her hands and knees at midnight, scrubbing the floor.”

One large long-term study of people over 100 years old shows centenarians share many traits, tendencies and traditions, even when living oceans apart. Not surprisingly, Katharine embraces many of these healthy habits. And she’s reaped the rewards with almost no health complaints — even now she doesn’t rely on daily medications and hardly ever wears her glasses.

But aging is a complex process. And while many of the body’s genes begin to break down once you hit 40, mounting research suggests there are things you can do to slow it down. “Science shows we aren’t completely at the mercy of genetics,” says pharmacist and longevity expert Farid Wassef, author of Breaking the Age Barrier.

“We know that because of a study that reviewed the lifestyle habits and genetic backgrounds of twins separated at birth.” Turns out genes played a smaller- than-expected part in the twins’ likelihood of developing cancer, with their inherited DNA contributing only 28 percent of the risk. Dietitian Leslie Beck, author of Leslie Beck’s Longevity Diet, agrees: “A long, healthy life requires good habits. Genes play a role, but the rest is up to you.”

What is Katharine’s secret to enjoying a healthy old age? She also attributes her longevity to more than good genes: She’s positive, she has faith in life, people and a higher power, and she constantly seeks out new experiences. Read on for more healthy habits that can help you join the longevity revolution!

1. Never act your age
In Okinawa, Japan, a region with the longest-living people in the world, residents are considered children until they hit 55, and a ritual called kajimaya heralds a return to youth on their 97th birthdays.

In Sardinia, Italy, the traditional greeting, a kent’annos (“May you live to be 100”) is appropriate in a place where age is celebrated and people work into their 90s.

Katharine doesn’t look or act her age. “Mum is definitely young at heart,” says Thomas. “She recently danced at her granddaughter’s wedding and still flies out to visit relatives in Ottawa and Vancouver.” Her adventurous spirit has kept her youthful. Katharine has never stopped searching for new experiences. In her 70s, she toured across Russia, Siberia, Azerbaijan and Ukraine. A decade later, she made two treks to China. “Age has never stood in her way,” says her niece Katharine Bergbusch.

2. Shut down stress
Katharine has always embraced a quiet, simple life. “I try not to worry, I just try to live,” she says. “And I try to have enough trust and confidence in myself to deal with things as they come.” Consciously keeping stress at bay is also proven to be key in reducing your risk of chronic inflammation and keeping cortisol levels low (research shows prolonged cortisol spikes may accelerate aging, damaging areas of the brain associated with memory).

The best way to battle stress is to carve out time for the hobbies you enjoy. (Katharine knitted, sewed and made jam into her 90s and still bakes.) It’s also important to find time in your day for quiet reflection. Research shows meditation may increase the activity of enzymes that rebuild telomeres, the sequences of DNA linked to aging that act like the plastic ends of shoelaces — the more they fray, the more you show your age.

3. Eat quality
Calorie restriction (CR) — eating 30 percent fewer calories per day without eliminating essential proteins, vitamins and minerals — has the potential to extend life and slow aging. In recent studies of rhesus monkeys, with whom we share 95 percent of our genes, researchers at the University of Wisconsin-Madison have followed the primates for over 20 years and found CR delayed the onset of many age-related diseases. Even more compelling: Those who consumed fewer calories were stronger and looked younger than their counterparts on regular diets. Twenty years after the study began, 80 percent of the calorie-restricted monkeys were still alive, compared with 50 percent of the monkeys on normal diets.

In another study comparing the diets of people aged 35 to 82 over a six-year period, those on eat-less plans improved their triglycerides, with 95 percent reporting levels lower than the average North American in her 20s.

Proponents of CR say it isn’t about deprivation: It’s a high-quality, low-calorie diet that might mean cutting 300 to 500 calories (a bag of chips and a soda) out of your day. Meals are planned with long-term nourishment in mind. Think nutrient-dense vegetables and fruits (seven to 10 servings), complex carbs that slowly release energy (unrefined whole grains and legumes) and healthy fats from olive oil and oily fish. “CR can be such a simple change that it looks like little more than a lean health food diet,” says Brian Delaney, co-author of The Longevity Diet.

Beck also notes the connection between calories and long life. “Calorie restriction is believed to extend lifespan in two ways: First, cutting calories reduces the production of free radicals, highly damaging forms of oxygen linked to aging. It also seems to increase the resistance of cells to stress, helping them live longer.”

4. Sleep and have sex
“Most North Americans live in sleep deficit,” says Wassef. “If you look at long-lived cultures, you’ll see they get routine, adequate sleep. They prioritize it and they don’t feel guilty about it.” Lack of sleep can offset important hormonal balances and it contributes to weight gain, depression and heart disease.

A little nocturnal action also has lifelong benefits. A study by Duke Medical Center in North Carolina found a woman’s past enjoyment of sex (indicating a history of a healthy, active sex life) was one of the top three most important predictors for increased and enhanced longevity, adding as much as four extra years.

5. Move every day
Exercising today offers benefits beyond tomorrow. Yoga, dance, tai chi and other core-building workouts improve balance to help you avoid falls as you age. “Turn your home, community and work into places that present you with natural ways to move,” says Dan Buettner, author of The Blue Zones: Lessons for Living Longer From the People Who’ve Lived the Longest. “Focus on activities you love like gardening, walking and playing with your family.”

Research also shows the fountain of youth may flow between the treadmill and dumbbells. “Muscles weaken with age; physical activity helps rejuvenate their stem cells and promote circulation,” says Dafna Benayahu, a medical researcher at Tel Aviv University. “Regular workouts may undo signs of aging elsewhere in the body.” One study found the cells of gym users who clocked 150 minutes of vigorous exercise a week looked about 10 years younger than non-exercisers. The best news is, it’s never too late to start. Another study found improved memory skills in women aged 65 to 75 who took up strength training once or twice a week.

6. Connect
On Sundays, Katharine’s kitchen is filled with warm smells of foods reflecting her German heritage — roasts, rolanden or schnitzel. “Sunday dinners are a tradition we’re never going to give up,” says Thomas. All the way across the globe, centenarians cherish close ties. In Okinawa, they form part of a person’s ikigai, or reason to live. Elders connect with young people and report some of the lowest depression levels in the world. “Centenarians generally don’t stay isolated,” says Wassef. “Prolonged loneliness can weaken the immune system.” He points to a study involving 7,000 people: Women who felt friendless were five times more likely to die from breast, ovarian and uterine cancers.

7. Tweet about it
There’s a growing movement in social networking among the 65-and-older set. Nearly half of all internet users are between the ages of 50 and 64, and social networking among those 50 and older rose from 22 percent in 2009 to 42 percent in 2010. Googling grandmas report up to a 30-percent decrease in loneliness and symptoms of depression, according to the University of Alabama at Birmingham. Leslie Beck’s Longevity Diet stresses the importance of stimulating your mind daily to keep your brain active and improve cognitive skills. On weekday mornings, Katharine does crossword or Sudoku puzzles and catches up on the Winnipeg Free Press to help her stay sharp.

8. Just believe
A survey of centenarians found almost a quarter attributed longevity to their faith. Katharine doesn’t fear death, but she also doesn’t spend a lot of time thinking about it. Instead, she finds peace in her belief in a higher power and the goodness of people. Her father was a Lutheran pastor, and she’s always taken an active role in church. According to Leslie Beck’s Longevity Diet, when researchers look at the power of religion, they note the important benefits of believing in something outside of yourself. Even if you’re not religious, you can tap into the power of belief, whether it’s getting involved in your community, volunteering for a cause you find important or finding peace outdoors in nature.

Lunenburg and Yarmouth, Nova Scotia: One of the highest concentrations of Canadian centenarians lives along these craggy seaside coasts. Experts point to something special in the salty ocean breezes, people’s fish-rich diets and their stress-free community spirit.

Sardinia, Italy: Evening meals are washed down with a glass of red wine squeezed from local grapes loaded with flavonoids, which are believed to reduce heart attack risk by up to 50 percent.

Nicoya Peninsula, Costa Rica: This close-knit community enjoys a high-fibre diet of beans and corn, and dinner is the smallest meal of the day.

Loma Linda, California: Many residents are practising Seventh-day Adventists, and researchers credit their health to a handful of nuts four to five days a week and alcohol- and nicotine-free lifestyles.

*This article was originally published on March 8, 2013.

FILED UNDER: Health How to do everything better life longevity