How to improve your health by decorating with plants

It seems like a no-brainer: A room decorated with plants can boost a person’s mood. But can the presence of plants also make people healthier? 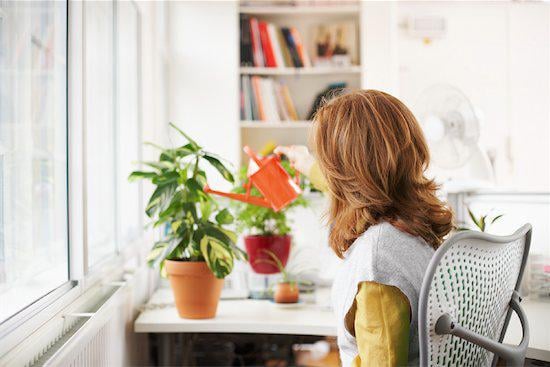 It seems like a no-brainer: A room decorated with plants can boost a person’s mood. But can the presence of plants also make people healthier?

Researchers in Sweden and Norway think so. They examined two groups of patients in the waiting room of a medical facility; One group waited in the original waiting area, decorated with only a few plants; the second group waited in an altered room filled with lots of leafy, pleasant-looking plants. It probably comes as no surprise that the second group – those exposed to lush plants – felt happier and healthier at the end of the four-week study, even if in terms of objectively measurable scales such as blood pressure, heart rate and respiration, there were no significant differences between the two groups.

But that’s not to say that there isn’t evidence that the presence of plants could improve physical health. According to a study by the Agricultural University of Norway, office workers who were in a plant-happy environment reported less fatigue, dry throats, headaches and coughs, and less sick days were taken.

Those benefits could probably be attributed to the ability of certain plant species to get rid of pollutants in indoor areas. Common indoor pollutants – or volatile organic compounds (VOC) – can cause illnesses ranging from asthma to cancer. In the 1970s, NASA was already gathering conclusive research that indoor plants had the ability to eliminate toxins. More recently, investigators at the University of Georgia and Konkuk University examined 28 plant species typically used for interior decorating and tested them for their pollutant removal efficiency. They found four plant species with the ability to remove all five of the most volatile indoor pollutants. These are:

So if you would like to improve your health, invest in a few of the above plants. Talk to your local nursery or garden centre expert for the plants that best suit your home or office. Just thinking about a pretty white-and-pink Hoya flower or some rich green foliage on my desk lifts my sense of well-being. Sounds cheesy? Maybe, but findings suggest that workers in plant-rich environments are less stressed, have lower blood pressure, and show less mental fatigue.

And greening up your office space takes no time at all. Check out this beautiful table topper that only takes 10 minutes to make!