How to be happy during a heat wave

This week in Toronto, the temperature has consistently been in the 30s — and, once you factor in the humidex, the 40s. While that level of heat might sound like misery to some, I'm having a pretty great time. So why is the heat wave making me so happy? 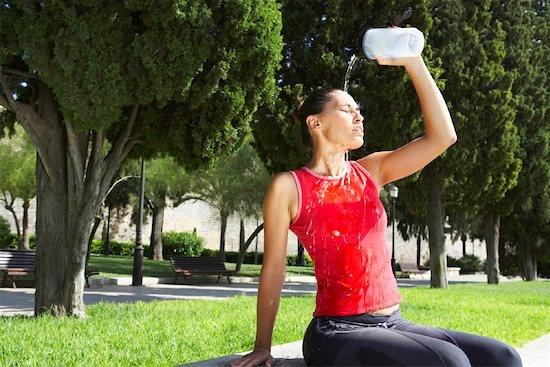 This week in Toronto, the temperature has consistently been in the 30s — and, once you factor in the humidex, the 40s. While that level of heat might sound like misery to some, I’m having a pretty great time. So why is the heat wave making me so happy?

1. It’s an excuse to do nothing: If you grew up in a household like mine, where you were always encouraged to go outside during the summer months — especially when all you wanted to do was sit in the basement and watch The Cosby Show — you won’t take the opportunity for sloth for granted. This kind of heat is just awful if you have something you need to do. (Running three consecutive errands the other day left me panting and desperate for ice cream.) But if the only thing on your agenda is lying face down in a park, this weather is the best.

2. Late-night swimming: I generally avoid public pools because they’re full of small children with weak bladders and teens who look like they’re gunning for a splash fight. Plus, I’m of the fair-skinned variety, prone to blotchiness with too much sun exposure. But with this recent heat wave, the pools in my neighbourhood are open late, the crowds are thinned out and the water is cool enough to bring down even the hottest of body temperatures.

3. Summer cocktails: I make no secret of my love of seasonal cocktails, and there are certain things that are appropriate during a heat wave. Ice-cold martinis do the trick, but they start to lose their lustre as their temperature gradually rises. My favourite summer drink right now is a Pimm’s Cup — gin and spices and homemade lemonade and seltzer — full to the brim with ice and ideally sucked down with a straw. It’s the perfect drink for passing the night on the stoop, waiting for things to cool down.

4. Hand-held foods: I think we can all agree that it’s too hot to cook. Lately, just looking at the oven is making me sweat. And so I’ve used the weather as an excuse to eat all of my favourite hand-held foods: burgers, tacos, sausages on buns, ice-cream sandwiches, shrimp wrapped in bacon, ribs, fried chicken, and coleslaw and potato salad (fork optional, unless sharing). True, eating with an “everyday is a carnival” attitude might not be the smartest idea in the long run. But for now, it’s putting me in a very summery, very happy-to-be-so-hot kind of mood.