One of the reasons I got married was so I’d never have to dance again. This is why when I heard that Korean pop star PSY (pronounced 'Sigh')’s Gangnam Style video – which is rapidly becoming the latest hot dance craze – made the jump to the fitness world, I didn’t want to publicly shame myself. 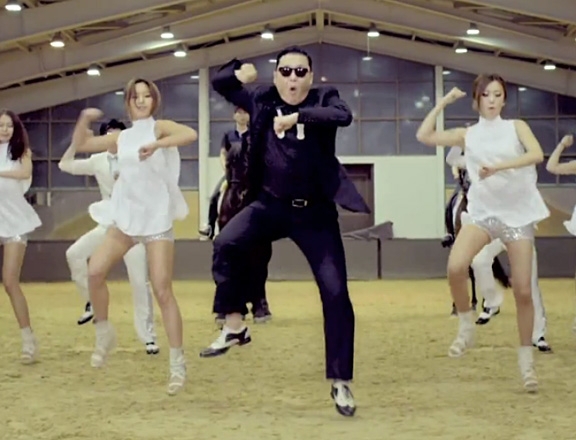 One of the reasons I got married was so I’d never have to dance again. I barely made it through my wedding reception without doing a face plant on the dance floor. The shooters didn’t help.

This is why when I heard that Korean pop star PSY (pronounced ‘Sigh’)’s Gangnam Style video – which is rapidly becoming the latest hot dance craze – made the jump to the fitness world, I didn’t want to publicly shame myself; I pulled the blinds shut and tried it in the privacy of my own home instead.

Britney Spears got taught the moves on Ellen. Fitness studios are advertising Gangnam Style inspired classes. And it didn’t take much searching to find aerobics instructors jumping on the YouTube band wagon. This was the video I chose to embarrass myself to.

When it comes to fitness classes, I am made of fail.

I cleared some furniture out of the way, launched the video on full screen, and commenced getting freaky. In short, I tripped over my own feet, couldn’t find any rhythm, and generally looked like a spider monkey coming off a bender.

“What the hell are you doing?” my wife said as she walked in the front door, home early from her meeting. I dashed towards my laptop and slammed the lid closed like it contained something x-rated.

“You were doing that stupid dance, weren’t you?”

“It’s for an article,” I said, and that was enough explanation for my wife, who is used to strange exploits in the name fitness columns.

Fitness class attendees can be a fickle lot. Trends come and go. Gangnam Style fitness is one of them. When the dance movie Lambada came out, like fitness classes soon followed. When Demi Moore stripped on the big screen, strippercise was born. I’ve seen drumstick fitness classes and classes that use the Shake Weight that trains up your forearm muscles…or something.

Do people still do Jazzercise?

Fitness classes evolve based on the latest trends, and there’s nothing wrong with this. For many to be motivated to exercise, it needs to be a social endeavor. “Human beings are wired to be in groups,” Bert Carron, a professor of kinesiology (focusing on sport psychology) at the University of Western Ontario told me. “Exercising alone doesn’t work for the majority of people.”

Carron was co-author of a 2006 analysis on the effectiveness of interventions to promote physical activity; it looked at 44 studies, containing 4,578 participants, that lasted anywhere from less than three months to more than a year. In the analysis, which was published in the Journal Sport & Exercise Psychology Review, Carron and colleagues examined the effect on adherence of a variety of exercise scenarios.

“Those who exercised alone at home had the lowest adherence rates by far,” he said. “Comparatively, those in the ‘collective’ group had much higher adherence.” When I asked him how much higher the adherence rates were for collective groups, he said he measured, “a substantial effect. It represents a very large difference.”

And that’s why these fitness classes are a good idea.

When something like Gangnam Style becomes popular, and fitness entrepreneurs decided to capitalize on it, I see it as a good thing. Whatever gets someone’s heart rate up, as long as it doesn’t cause injury, is better than the current state of affairs.

Not according to some people on Facebook and Twitter, though. Preachers of the hardcore gospel will say CrossFit is either terrible or awesome. Kettlebells are an adjunct exercise or the only exercise. Anyone who does Zumba is a pansy. Running is for idiots. If it’s not interval training you’re wasting your time…

The fitness noise can be overwhelming. When it comes to being active, your way is the only way. Whatever you happen to enjoy – if’s its riding that Gangnam pony in an oddly-sexualized dance aerobics class, practicing your stripper moves, or just walking the dog, adherence depends on your level of enjoyment.

Eventually, people will get bored with this latest fitness trend, but that’s OK. Another one will be along to replace it soon enough.