How the French eat lunch better than us

The answer is simple: Move to France! Okay, that's maybe not the ideal remedy for everyone, but there are certain things we can learn from the French relationship with food. 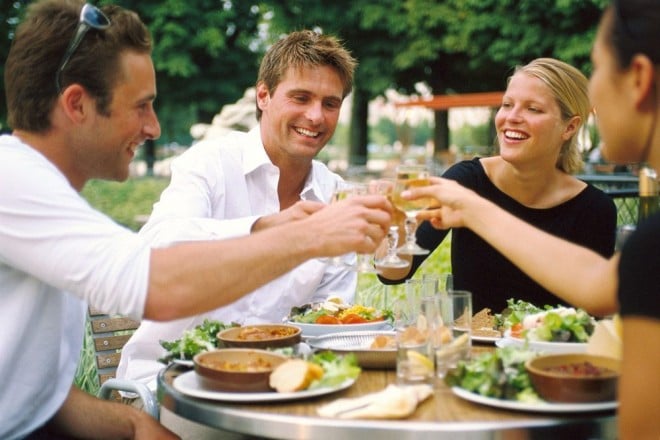 The answer is simple: Move to France! Okay, that’s maybe not the ideal remedy for everyone, but there are certain things we can learn from the French relationship with food. Here, we talk to Elizabeth Bard, author of Lunch in Paris, an American author who moved to Paris for a man and fell in love with the food.

Q: So you moved to Paris for a man?
A: I was studying in London at the time, and we did the long distance thing for a year or two. Eventually, it was time to take the plunge and one of us had to move to New York or Paris. I chose Paris and the rest is history.

Q: What was your relationship with food prior to moving to France?
A: I grew up in the U.S. in the 1970s, so that was orange, powdered macaroni and cheese – and I ate it with very great pleasure. I used to study for my finals in high school hopped up on Pillsbury vanilla frosting. I did the whole processed thing. I was always an adventurous eater and made to try things, whether it was mussels or calf’s liver, and I used food to explore different places when I traveled. I typically hit a market before I hit a museum.

Q: What are the primary differences between the French relationship with food and the North American relationship?
A: First of all, there’s the visual pleasure of it. The French are very engaged with the aesthetics of their food; there’s the beauty of the markets and presentation. And then there’s the ritual, too. The French take time. I was a New Yorker, and my lunch hour consisted of the 15 minutes it took me to walk to the corner deli, grab a sandwich and take it back to my desk. To see people indulging daily with friends and colleagues in an hour-long lunch, or go to the market with their whole family, was really something that made me aware. I was also a freelance journalist when I arrived, so I had a lot of time on my hands. Some of the first friends I made were the people who sold me my fish and raspberries.

Q: How did moving to France change your relationship to food?
A: It made me think about food more, since food is such an integral part of the way people are together. Most social activities and family occasions revolve around food, but not in the same way they did in my family. I grew up in a typical New York Jewish family where there was always a lot of food around, but there wasn’t a whole lot of ritual or structure to it. More than anything, France taught me that there’s a pleasure in the structure of buying, preparing and eating meals.

Q: Did you cook much before you moved to Paris, or is this something you picked up after the move?
A: I cooked some when I was younger and first lived in New York. In London, there wasn’t a lot to cook – just toast with jars of lemon curd. I think French cuisine has an undeserved reputation for being fussy and complicated, but I don’t think it is. I think it’s just about starting with really fresh, wonderful ingredients. And when you start with wonderful things, you don’t have to do that much to them. It’s about careful shopping, eating seasonally and that pleasure of those three weeks of cherries and then not seeing them again for 11 months.

Q: Have you made a full transition to the French way of eating or do you still carry some American food hang ups with you?
A: I do. When my husband travels, I’ll sometimes find myself eating late at night, standing in front of the refrigerator for no reason – which, of course, the French never do. French refrigerators keep bankers’ hours; they open and shut at very specific times of the day. I occasionally do the stress eating thing, and I feel like the French don’t have the instinct to use food in that way. They must do other things when they’re stressed but they don’t sit down with a pint of Ben & Jerry’s. But one thing I have learned is how nice it is to be really hungry when you sit down to each meal. When I’m back home in the States, I’m never hungry; everything is in the shape of a muffin and I eat carbohydrates constantly. In Paris, because the eating times are so structured, you get genuinely hungry before you sit down to each meal. It makes you much more connected to your body.

Q: How does actually making what you eat impact your relationship with it?
A: We moved to Provence two years ago, and I’m surrounded. We get these peaches that are like little balls of sunshine. There’s a pleasure in the immediacy of those ingredients and having them around. I cook even more here than I did in Paris. There’s a real pleasure in cooking things that just naturally taste good, and I have a real problem explaining the quality over quantity thing to my parents. They’re still making trips to Costco, and will buy 10 pounds of flabby salmon because it’s on sale and then they stick it in the freezer. It would never occur to them to buy one portion of more expensive wild salmon than six times the amount necessary. I’m now willing to wait in line for things I want, and I’m eager to figure out who has the best green beans and who makes the best lavender honey. There’s a lot of pleasure in that for me.

Q: Do you have any advice for those stuck in the terribly modern cycle of being wary of food and then gorging on processed, convenience items?
A: You can’t change everything about the food culture you live in. But the thing that really sparked an interest for me was finding markets. I would tell people to go and find a little, local farmers’ markets and shop there, if only a couple of times a month. Get in the habit of going somewhere there are beautiful, wonderful fresh things and experiment with them. Another tip is to spend some time on Sundays cooking things to take for lunch during the week, so you can take some time on a park bench and eat something decent. It doesn’t have to be complicated, it can just be a little something you did for yourself.