How Many People A Day Could Canada Vaccinate When Going Full-Tilt?

Using Manitoba's detailed rollout estimates as a guide, we forecast how soon we might get every adult in the country inoculated. 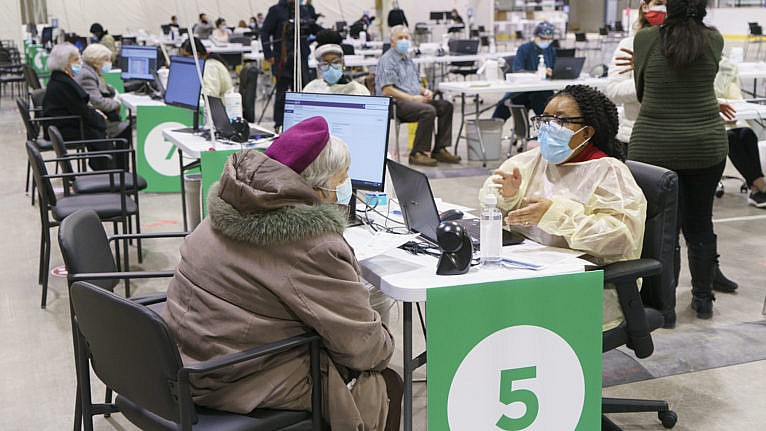 Seniors register at a COVID-19 vaccination clinic in a hockey arena in Montreal. (Paul Chiasson/CP)

The weather is improving, days are getting longer, and vaccination booking sites and phone lines are opening. It feels like the long, hard winter of our second wave of COVID-19 is behind the nation: provinces and local health units are ramping up efforts to vaccinate as many people as possible, as infectious variants of the virus threaten a third wave of cases.

Which raises the question: How quickly—really—could Canada vaccinate everyone?

First, the details: Last Friday, Prime Minister Justin Trudeau announced that, instead of receiving six million doses of vaccine by March 31, Canada would be getting eight million doses, including another 1.5 million from Pfizer and 500,000 of the recently approved AstraZeneca vaccine.

With 3.5 million doses arriving in March alone, provinces are now gearing up to handle the next phase of the national immunization campaign: mass vaccinations.

For instance, Manitoba has set itself a target of administering 20,000 doses a day by April 1, assuming vaccine supply is not an issue. Alberta Health Minister Tyler Shandro has talked of 180,000 doses a week while Premier Jason Kenney has mused about more than 200,000 doses a week by the end of March.

It is a Herculean effort that started months ago. For example, Manitoba issued an order on Dec. 9 that widened the pool of people allowed to administer COVID-19 vaccines to include physiotherapists, veterinarians, some medical assistants and retirees no longer registered with their professional colleges. As well, the government opened an employment portal to staff its vaccination clinics and those hired who needed the specific qualifications to immunize people were directed to take an eight-hour tuition-free microcredential program that Red River College created in just two weeks at the end of 2020. To date, 824 people have completed the course.

With its early start, then, Manitoba could be seen as a template—especially when it comes to mobilizing the manpower necessary to make mass vaccination work. As of March 10, Manitoba reports it has hired 1,385 people to work as immunizers, clinic managers, clinical leads, system navigators and observers in the province’s COVID-19 vaccination effort, in addition to 971 people assigned from regional health authorities. In total, that means 2,356 people. Expand those figures on a per capita basis to every province and territory and the scale of the challenge becomes clear.

In Toronto, Matthew Pegg, the fire chief in charge of the city’s emergency response to the pandemic, estimates that 1,400 staff will be needed to operate the city’s nine mass vaccination clinics, if they are open nine hours a day, seven days a week. Those clinics are expected to vaccinate 120,000 residents a week, with the city’s entire effort ramping up to 975,000 doses a month, Pegg told the Toronto Star.

And Toronto is already thinking of going 24/7 at some city-run mass vaccination sites if it gets enough doses. It makes sense for cities like Toronto, as its population density (three million people in a relatively small area) easily translates into speed and efficiency at its clinics. That’s what New York City did when it ramped up vaccinations.

It’s likely that, like so many political commitments, some of the estimates given for Canada’s campaign will turn out to be underpromises. South of the border, President Joe Biden promised that the country would administer 100 million doses in his first 100 days of office. Then 150 million doses. Now, by throwing the weight of the federal government— including military personnel and the Federal Emergency Management Agency (FEMA)—into the issue, including setting up federally-aided vaccination sites across the country, it looks like he’ll meet that initial 100 million dose goal by mid-March, well ahead of the April 30 deadline.

Still, in calculating Canada’s vaccination capacity, I’ve made some assumptions: that Canada gets all the vaccine it needs, with no distribution hiccups; that there are enough needles and other supplies, as well as trained staff at clinics; and, of course, that the weather is improbably perfect, with nary a spring blizzard to disturb finely calibrated schedules. In other words, ideal conditions without variation between provinces and territories. (Yeah, I know.)

What do we need to do to vaccinate every adult by Canada Day?

Of course, some have already received their first doses as well as their second ones. According to statistics gathered by the COVID-19 Canada Open Data Working Group, some 2.5 million doses had been administered by Tuesday, with 580,000 Canadians fully vaccinated. As all vaccines currently in use are two-dose vaccines, then those who received two shots account for about 1.16 million doses in total. That leaves around 1.34 million Canadians who have received only their first dose, while some 1.92 million Canadians have received at least one dose. (These numbers are all rounded.)

That may seem unrealistic but it isn’t. The United States is currently vaccinating 2.1 million people a day. Canada’s population is roughly 11.5 per cent that of the U.S., so simply matching America’s pace suggests we’d be vaccinating 241,500 people a day. We would need just 21,500 more vaccinations a day to hit our mark.

Can we do better than Canada Day?

Let’s look at Manitoba and its webpage loaded with specific vaccination goals, including plans to immunize 122,000 residents in the next 28 days—along with that aforementioned target to have the capacity to administer 20,000 doses a day by April 1.

With an overall population of 1.4 million, Manitoba has roughly 3.7 per cent of Canada’s population of 38 million. If the country as a whole matches Manitoba’s targeted pace, we will be vaccinating 540,540 Canadians a day.

Manitoba’s share of those 29.5 million adults waiting for COVID-19 shots is roughly 1.1 million (again, these simple calculations assume the percentage of people immunized is constant across all of Canada; in reality, even though vaccines are distributed on a per capita basis, there is some variation for higher-risk populations, such as those in the North and Indigenous peoples.)

At its ideal 20,000 shots-per-day rate, Manitoba would take 55 days to give first doses to all remaining adults in the province. If the rest of the country were proceeding at the same pace, it would take the same number of days to inoculate all eligible Canadians. That may sound really ambitious, but on March 10, the Manitoba government reported it already has the capacity to vaccinate 19,000 a day.

Or, to be conservative, you could start the clock on April 1. In that scenario, every adult gets at least one dose by May 26.

Oh, and guess what’s two days before May 26? Victoria Day. If Canada knuckles down and works fast, that long weekend could mark the start of a very, very good summer.