He swept into the dimmed Sony Centre in Toronto, combing the crowd like an evangelical leader, and Science-ish half-expected audience members to fall down at his touch. But this was no high priest ready to encourage middle-aged men and women to start walking after being paralyzed or to see again after going blind. 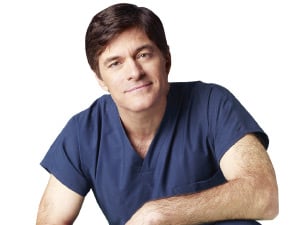 He swept into the dimmed Sony Centre in Toronto, combing the crowd like an evangelical leader, and Science-ish half-expected audience members to fall down at his touch. But this was no high priest ready to encourage middle-aged men and women to start walking after being paralyzed or to see again after going blind. This was Dr. Mehmet Oz, here to give a motivational talk about the “biology of blubber” and weight loss.

The esteemed cardiothoracic surgeon and Columbia University professor made it big on Oprah demystifying the inner workings of the human body — from poop to the reproductive system — with plastic models and cadaver parts. In 2009, Oprah created the daily health and medical advice talk program, the Dr. Oz Show. Since then, Dr. Oz has been doling out American-style health evangelism to viewers in 112 countries. A recent episode on raspberry keytone supplements discussed how this “miracle fat burner in a bottle” can shrivel fat cells, while others have looked at foods that act as medicines, and “anti-aging miracles in a bottle.” Of course, this has galvanized a cadre of MD bloggers who have dedicated hours to dissecting and debunking the science on the show.

Today, the high-profile doctor is wearing a slim gray suit instead of his trademark scrubs. For two hours at this MukiBaum fundraising event, some two thousand audience members will hear a lecture on “reversing the obesity epidemic” peppered with hugs and jokes geared toward disgruntled housewives.

Science-ish was one of the few skeptics in the room. In order to understand how the doctor thinks about scientific evidence, his audience, and what really makes people healthy, Science-ish sat down with Dr. Oz before his talk.

Q: As you know, there’s a tension between science—where breakthroughs are rare—and broadcast, where you need to have something new and flashy to say every day. How do you reconcile science as an iterative process with the demands of a daily talk show?
A: Let me answer that question by challenging an assumption. There are three words to describe what I do. I’m a doctor. This comes from the Latin docere, teacher. I’m a physician, which comes from the Latin, physica, science. I’m a medicine man, which means healer. To help someone else, you have to have science, you have to be able to heal, and you have to be able to teach. They all work together. In Western medicine, we put a disproportionate (emphasis) on the science part.

Q: When you treat all science as equal and deserving of equal attention, and give a forum to things like the HCG diet, isn’t that potentially dangerous, even if you outline the caveats at the end of a segment or call for more research?
A: I had (the HCG diet) folks on the show because a lot of people were taking it. I was always dumbfounded that people would think (HCG would) work as a droplet because it can’t get through mucous membranes in the mouth. But while I was looking at debunking the idea of the droplets, the idea of injections came up, which is fascinating. In the course of those discussions, it became evident no studies had been done on HCG, the last ones were done in the 70s, and now we know better about how these things work. So the big story was not the HCG diet. It was the fact that there are times in medicine where we say something doesn’t work and it becomes dogma and we’re not willing to reexamine that dogma. Even though there are real people doing real work trying to figure it out. Take alternative medicine. A lot of times people will swear by the fact they feel better if they do something. Let’s say they have Fibromialogia—a nebulous ailment—and they take D-ribose, and argue that it helps them. You have to listen to what they are saying. If you’re too closed minded, which sometimes in medicine we are, and we discount things because we think we know the answer, then we are not serving as well as we could.

Q: So then, as a doctor, how do you square evidence-based medicine with what you do on the show?
A: We have a medical unit made up of full-time medical students. They take a year off to come work with us. We have four or five medical producers—investigative journalists, who are attuned to health issues. We will look at a topic, sometimes controversial ones like arsenic and apple juice, sometimes ones that are more straight forward. We have a medical note we produce for every show; I’ll go through it and agree main points for the show.

Q: A lot of what we know that’s good for us—the kind of regimen you live by, nuts and berries, exercising every morning, eating really minimally, little meat—that doesn’t make good TV.
A: No, it doesn’t make good TV. But you can have conversations about health topics if you’re willing to acknowledge one big issue: people don’t change what they do based on what they know; they change what they do based on what they feel. The show works primarily because we emotionally connect with folks. I’d take you back to a time of 1,000 years ago, in little villages where there was always a healer. They didn’t do hernia operations on you. They heard you, they listened to you, they let you tell your story. When we come to visit the audience, we come into your homes. We’re called talk show hosts, but we’re really a talk-show guest.

Q: Your visits seem to be transformative for many people.
A: It has to be (transformative). If I’m giving you confidence that you can change your life for the better, if I am giving you hope, that’s the most healing thing I do… Most of medicine is not based on evidence. It’s based on the experience we have taking care of people… Most of what we do is not based on evidence because there is no evidence to support it.

Q: Like raspberry ketones. Your segment about the supplements made great TV. You had the balloons as fat cells, and you were deflating them in acid—what these supplements do, supposedly—and then inflating them, but again, as we know, it’s calories in and eating minimally that helps people lose weight. Not supplements.
A: Raspberry ketones are a good example. It’s definitely mostly calories in, calories out. But it may be more than that. Fifteen per cent of what goes through your body goes through undigested. So it’s not quite calories in. Also, we have different flora in our guts and those flora help you absorb calories differently—not huge differences—but we’re looking more and more at that. I was at the World Economic Forum in Davos 10 days ago, and one of the guys there with me told me we’re getting closer and closer to understanding how some people’s genetics predispose them to some types of bacterial DNA, and some people’s epigenetics are affected by the bacterial DNA. So there’s no question some people are heavy because they have the wrong bacteria in their guts. Not all calories that get into your mouth get into your body. The second big box is that not all foods make you feel satiety the same way.

Q: Isn’t that complicating matters? You end the segment on raspberry ketones with a caveat saying there are no shortcuts to health. But I’m concerned about all the folks out there who can’t afford nutritious food, that then go out and buy supplements thinking it might be the answer to the obesity epidemic.
A: I would give raspberry ketones as an example of where I’m trying to give you hope. I do actually believe from the data we have so far it could be a nice little nudge. The amount of weight you’ll lose is two, three, four pounds more than you would have. But it’s a nudge.

Q: But we know it’s getting up early and exercising, like you do, that leads to good health. Not supplements…
A: We spend three-quarters of the show in subtle ways going at those same points, trying to get that message across in a way that resonates with you. That makes you think you could do it. The issue of snacking is another good example. You have to snack, but you need the right kinds of snacks. If you snack normally, then you’re never hungry, your ghrelin levels never get too high. I say all these things in fifteen different ways, and we come at them with different show angles.

Q: So that’s the greater good: balancing the glitzy stuff with science?
A: If you went line by line through the show and try to figure out what part of it is glitzy stuff, like icing on the cake, and what part is the meat of the cake, I bet that’s the right ratio: three-quarters is meat and potatoes, hard-core stuff you got to do but that’s the medicine. And if you just give people medicine, no one is going to watch the show. You have to give people information that seems like it’s novel and different and actionable. And do it in a way that’s defensible and exciting. Otherwise, you’re not going to have a show.