Is There Any Science Behind Food Combining?

In a nutshell, no—but that doesn’t seem to be stopping it from trending again. 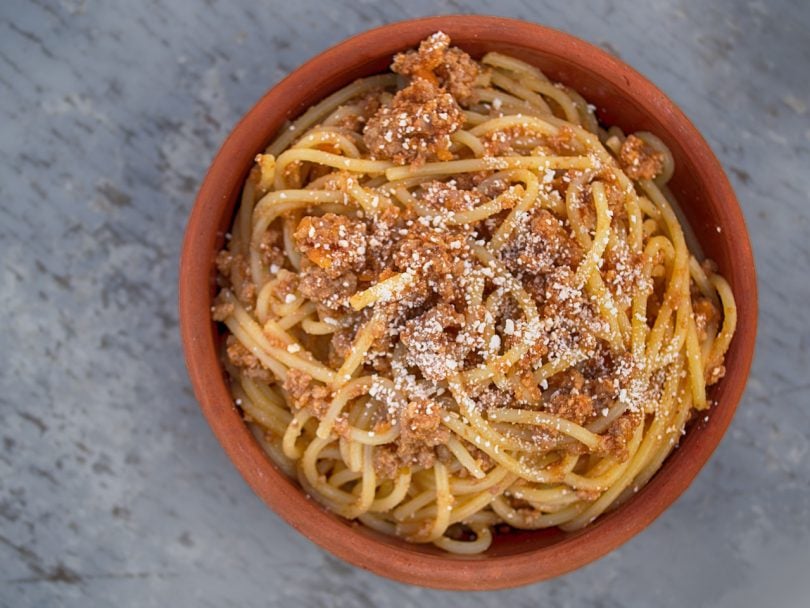 In a food-combining diet, this delicious bowl of spaghetti bolognese would be out of the question!

Most of us would think nothing of starting our day with yogurt and fruit, having some pasta with tomato sauce for lunch, then steak, a baked potato and a glass of water at dinner.

But for people who follow the food combining diet, all of these meals are off-limits.

Food combining is based on the ancient belief that when foods are eaten in the wrong combinations, our bodies can’t efficiently and thoroughly digest them. This, those who practice combining believe, can result in weight gain, inability to detox, bloating, undigested food rotting in the gut, acne and a host of other conditions. If food is combined properly, proponents believe that it will facilitate digestion and absorption.

The practice of combining foods to improve digestion has its roots in Ayurvedic medicine. In the early 1900s, a physician named William Hay used the method—eventually naming his iteration the Hay Diet—to lose weight. Food combining eventually became the theme of the bestselling diet book, Fit for Life, in the 1980s. And it’s now having a resurgence on, where else, Instagram.

Food combiners follow a strict set of rules that dictate which foods can be eaten together. Here are some of the basics, and the (faulty!) reasoning behind them.

No carbohydrates with proteins. Food combiners believe that carbs and proteins are digested at different rates using different digestive enzymes. When eaten together, this confuses the body and the competing food types do not get broken down properly. As a result, they sit in the gut, rotting.

No fluids with meals. Fluids, when taken with meals, are thought to dilute the digestive enzymes and stomach acid, rendering them less effective for digestion. This purportedly causes food to be only partially digested and remain, stagnant, in the gut.

Eat fruit only on its own. Fruit is mostly water, so food combiners believe it washes out the intestine, preparing it for other foods, which is why it is commonly eaten by itself for breakfast. If eaten with other foods, fruit is thought to putrefy in the gut.

The problem with all of these purported benefits? The body just doesn’t work like this.

While it’s true that protein and carbs are digested at different rates, our bodies are well-equipped and well-organized to handle this. Unique digestive enzymes (different from the enzymes found in food) are secreted at different times during the digestive process to help digest different micronutrients. Nutrient absorption happens in different places along the GI tract for different foods. And perhaps most importantly, remember that our stomachs are naturally extremely acidic. This acid facilitates the breakdown of whatever happens to be inside the stomach, regardless of what type of food it is.

This is another reason why the rule about not eating acidic foods with starches makes no sense, since once food reaches the stomach, which is pretty much right after it’s swallowed, the food—and the enzymes it contains—begins breaking down. And that’s exactly what’s supposed to happen. It’s all part of digestion (look it up!).

Speaking of stomach acid, the well-cited theory that drinking fluids with meals can impede digestion is completely false. Our stomach has parietal cells, whose job it is to ensure the stomach contains an optimal level of acid at all times. Regardless of what you eat, these cells will know when the stomach needs more acid, and they’ll make it happen. (Also, consider this: if consuming fluids dilutes stomach acid and impairs digestion, how have we gotten away with eating soup for centuries?)

Lastly, fruit—or any other food—will never rot in our gut. Suggesting that we have pounds of toxic, undigested food in our intestines is a fear tactic that’s often used to promote cleanses and detox diets, and it couldn’t be further from the truth.

In reality, our stomach acid kills any bacteria that would facilitate putrefaction, and nothing really sits in the GI tract for all that long. You may be constipated, but that just means food is passing more slowly than usual through the colon (not grinding to a complete halt).

To reiterate, food combining has no scientific evidence behind it. Any weight loss or resolution of your gastrointestinal symptoms is likely due to having removed foods that were bothering your gut, or improving your diet as a whole.

Diets like food combining foster a distrust in our bodies and a belief that it needs help to perform normal physiological functions. But the truth is that our bodies are well-suited to eating, no special combination required.