Why you should enrol your son in gymnastics 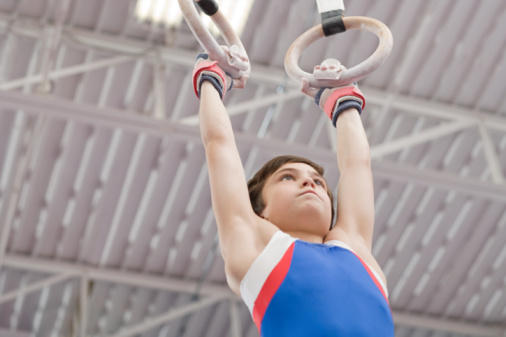 Hockey and football aren’t right for everyone.

Kids need at least an hour of exercise every day to maximize health, although you can be pretty flexible about what that exercise is. Booting them out the door to play cops and robbers with the neighbourhood kids is just fine, but organized sport can also make an important contribution to a child’s growth and well-being.

In Canada, a lot of parents automatically think “hockey” when it comes to sports for boys. However, rough and tumble sports aren’t necessarily right for everyone. Like it or not, genetics play a role in how well-suited you are to a specific type of exercise. Although there are always exceptions, size and mass are a distinct advantage on the hockey rink and football field. Just like tall people can excel in basketball and volleyball, those of shorter stature make the best gymnasts.

According to Olympic gold-medalist Kyle Shewfelt, “Every little boy should be put in gymnastics,” regardless of size. He does admit that his five-foot-five frame was an advantage for him. “The lower your center of gravity, the quicker you can flip,” he told me. “Although I’ve seen successful gymnasts who are six feet tall, the bigger you are the harder you fall.”

If you have a son who isn’t destined to tower over his peers, then gymnastics might be the sport for him. The reason is simple: if they’re good at it, it will have a positive affect on their passion for exercise and they’re more likely to put additional effort into it.

Kyle’s recommendations about putting your son in gymnastics, regardless of stature, makes perfect sense. “It is the best place to teach kids what they need to exceed at other sports because they learn how their body works,” he said. “It develops speed, power and strength, as well as discipline and time management, and it’s really a shame that they don’t teach it in schools anymore.”

“It’s a fundamental sport and it’s fun! It’s like going to a gigantic playground, and it’s the perfect place for a crazy little boy to get his energy out,” he said.

You shouldn’t be surprised that Kyle had boundless energy as a child. He told me his mother put him in gymnastics at age six to salvage her couch and bed – he was constantly doing flips on them. “My parents put us in as many sports as possible, and I did play hockey quite a bit. I could skate well, but couldn’t score a goal.”

Then the time came when Kyle had to choose between hockey and gymnastics. “I remember that it was an obvious choice. Gym was what I thought about all day. Hockey for me was a drag.” I asked him what drew him to gymnastics and he said, “It was just so much fun being upside-down and figuring out what crazy things my body could do.”

Although very few are destined to be Olympians, Kyle knew at a young age it was what he wanted. “I was interviewed on TV as the athlete of the week when I was nine and said I was going to the Olympics and I was going to win.” And it took a lot of hard training to get there— as much as 20 hours a week—but it was what Kyle wanted. He also expressed appreciation for having parents who supported his dream.

But did all that training take a physical toll, and is gymnastics a dangerous sport for your child?
“Not really,” said Kyle, reflecting on injuries, “there were little things here and there but kids are very resilient.” And that stuff about gymnastics stunting growth? It’s a myth. The reason why most professional gymnasts are shorter than the average person is the fact that their stature helps make them more capable at the sport. It’s like saying playing basketball makes you taller, or saying playing hockey makes you need a good dental plan. Oh, wait. That last part is true.

No sport is without its risks, but letting kids sit on the couch all day and not get any exercise is far more risky. If you have a rambunctious youngster—male or female—then consider putting him or her in gymnastics.