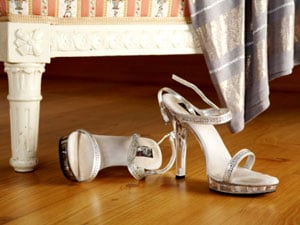 This was the laundry list for the lap dancing class I signed up for with three friends from university days (who are now moms like me). We squeezed it in between the kids’ baseball practices and swimming lessons on a Saturday afternoon at Aradia Fitness studios in downtown Toronto. The franchise has locations in Alberta, B.C. and Ontario and specializes in pole dancing, lap dancing and “sensual” movement classes, catering to everyone from women bored with their fitness routines, to professional dancers stumped for new moves.

I know friends who dabbled with the pole dancing class, but who keeps a pole in the rec room? For lap dancing all you need is a chair, a dirty little Britney get up and a partner willing to shut up about the broken garburator for five minutes, let the incredulity wash over him, and open his mind.

The cost is a bit higher than an average spinning class: an intro class is $25, and drop-in classes are $17; and they’ve become a big hit with bachelorette parties, as we leave the studio we jostle through a giggling group with a blindfolded bride-to-be.

Our teacher Jessica is a former rugby player with a catlike body and patent platforms that make her about eight-feet tall. Over the next hour, she teaches us the reverse showgirl (starting in a crouch, grab ankles as you raise your butt up, then push chest up and add a hair flip), the rocking cat (kneel down, stretch arms out in front of you and rock your chest from one arm to the other, while curling up the opposite leg), and the body slide (slide your left arm slowly across your torso down your leg to foot, finish with optional butt slap – cup your hand when you hit your derriere, Jessica advises, it makes a louder sound).

She then choreographs a routine to Britney Spears’ “Gimme More” that incorporates these moves. It’s important that they are performed slowly and deliberately, which is sexier, but also tougher since it isolates core muscles and glutes. “You can burn about 300 calories an hour pole dancing, even more in an erotica class,” notes Jessica.

If you’re the shy type, layer on a tank so you can practice peeling off your shirt expertly, and opt for leggings under a short skirt – these will come in handy when you are doing leg splay moves on your back in front of the mirror (which reflects to whole class). I didn’t feel comfortable trotting in my lingerie, but be forewarned – some class participants aren’t quite so modest. One thing not to skimp on: ridiculously high shoes for the proper attitude. Note, there’s more hair whipping involved here than at a Miley Cyrus concert – if it’s long wear it down.

Equipped with my knowledge of the basics, I get home and download the song onto the computer in my basement office, set up a chair in the adjacent den and practise the routine a few times with a cheat sheet, making notes: take off shirt HERE.

Once installed in his chair I worry my husband might look embarrassed, like when I suggested dragging a karaoke machine to his boss’s formal dinner party. Surprisingly, he stares at my face most of the time during the routine, instead of, uh, other parts that he doesn’t see as much of on a daily basis.

I realized devoting three minutes of pure, focused attention on him is a rarity, and now that I have his undivided attention it is hard to resist the selfish opportunity to whisper: “My car is making a funny noise, can you go look under the hood?” or “I think the hamster died two days ago.”

He is unusually complimentary, but remains ever the handyman. “You know what would have made this better?” he says, peering up at the potlights. “If we could rig up some red bulbs in here.”

Need some creative date ideas? Check out our create-a-date tool to point you in the right direction.