She sprints, jumps, hurls javelins and shatters world records. Ninety-five-year-old Olga Kotelko is changing how we think about aging. In this excerpt from his new book, Bruce Grierson gives us an inside look at the woman who can’t be stopped. 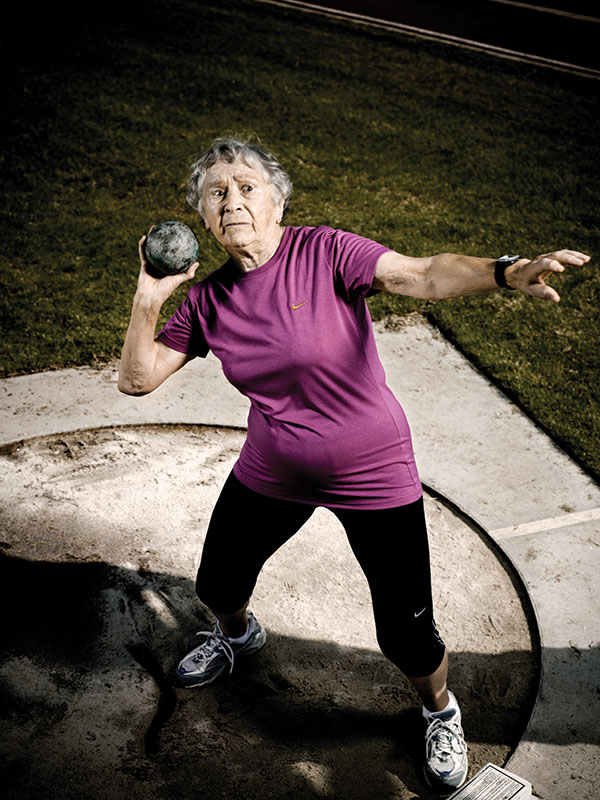 Ever since she was 90, Olga Kotelko has presented a problem for organizers of the track meets she enters: Whom does she compete against?

The issue surfaced prominently in the 60-metre-dash final at the World Masters Indoor Athletics Championships, in Kamloops, British Columbia, in 2010. Olga found herself, well, in a class by herself. There just aren’t many nonagenarian sprinters — even when you draw from the whole planet. The next-oldest woman in this meet, Californian Johnnye Vallien, was 84.

So there Olga was, 91, bespandexed and elfin, lumped in with the men.

In lane one stood Orville Rogers, 91, a long-striding retired Braniff Airways pilot and the world-record holder in the mile for men over 90. Next to him: Belgian Emiel Pauwels, 90, another world-record middle-distance man (1,500-metre), in bright orange track spikes, who would later make everyone nervous as he ran most of the 3,000-metre final with his left shoelace untied. Front and centre: Ugo Sansonetti, 92, a former frozen-food magnate from Rome, in a blue sleeveless skinsuit, his tanned biceps bulging like small baked potatoes.

Olga drew the inside lane, rounding out the field. She wore black tights and a long-sleeved white shirt — the modest uniform she wears no matter the weather.

She’d been worried about her start. She’s not a good starter. She can get rattled. Sometimes, when the gun sounds or even a fraction of a second before, she takes a step backward. But today she started clean and mechanically strong, piston-pumping her arms, generating enough wind to pin her hair back a bit.

It’s no longer strange to see geriatric runners: Every big-city marathon has its share of valiant, white-haired competitors who spark bursts of applause as they shuffle past. Kids and dogs and young adults run full-out. But old folks? The incongruity of that image inspired a television commercial that Ugo Sansonetti shot for Bertolli margarine not long ago. A runaway baby carriage is seen careening through the streets of Rome, until a fissure-faced old bystander — Ugo — springs into action and chases it down.

Sansonetti crossed the first line at Kamloops, in a world-record time of 11.57 seconds. He bounced around in the run-off area, arms overhead in triumph, as Rogers glided in behind him at 12.82. Olga came in third, at just over 15 seconds. She looked concerned for Pauwels, the Belgian, who had caught a spike and crashed down hard, then picked himself up and limped in last.

She was cool with running against the guys. “That one fellow was pretty fast,” she said, on the way to the changing area. She had gotten used to this. When you’re the fastest 91-year-old woman on the planet, either you compete against younger women or you run against the guys.

Just how good is Olga? There are a couple of ways to put her in perspective.

She currently holds 26 world records. She set 20 world records in a single year, 2009. She hits these totals in part by entering more events than everyone else, including a couple that nobody else in the world her age attempts. She will often do six throwing events, three sprints and three jumps. (At age 88, she considered adding the pole vault, but was deterred by practical considerations. “What do you do with the pole — strap it to the roof of the car? Check it on a plane?”)

Track records, at the elite level, tend to fall by fingernail pairings of time and distance: fractions of seconds, portions of inches. At the 2009 World Masters Athletics Competitions in Lahti, Finland, Olga threw a javelin almost 20 feet farther than her nearest rival. At the World Masters Games in Sydney, Australia, in 2009, Olga’s time in the 100-metre dash — 23.95 seconds — would have won the women’s 80-84 division — two age brackets down.

Olga stands five feet and a half an inch. She weighs 130 pounds. For her size — and this may be the most curious thing about her — she has extraordinary power. It can be surprising, after her slo-mo windup, to see how far the things she throws go.

On the hammer throw pitch in Kamloops, she took her place with the other competitors. Big guys with leather gloves paced around, shaking their hands out. Olga removed her glasses. There was a sudden and brief sense of menace; when a little old lady starts swinging a three-pound cannonball around her head, a good outcome is not guaranteed. But the thing sailed, straight and true. “If I spun I could throw it farther,” Olga says, but after watching somebody very old fall that way she has decided not to risk it.

Olga got more leg into the second throw. But the trajectory wasn’t what she liked. She made a little swan’s head gesture with her hand, to remind herself. Routinely, Olga performs better on every subsequent attempt as she recalibrates and tries again. It’s like watching a marksman bracket the bull’s-eye and then draw in: 12.72 metres. 13.37. 13.92. In 10 minutes she added four feet of distance. “New world record,” a disembodied voice said over the loudspeaker.

There is a formula called “age-grading” that’s used to put the performances of older athletes in perspective. Age-graded scores tell us how impressed we should be by what a masters athlete — placed in categories from ages 35 to 105 — just did. A set of tables plots a given performance against the expected decline of the human body, and expresses it as a percentage. So, theoretically, 100 percent is the high-water mark for a human being of that age.

But a number of Olga’s marks — in shot put, high jump, 100-metre dash — top 100 percent. In Sydney she threw the shot put 5.6 metres — which age-grades out at 119 percent. If you plug Olga’s 23.95 100-metre dash time from Sydney into the tables, you’ll find it’s exactly equivalent to American Olympian Florence Griffith Joyner’s prevailing, suspicious, and thought-to-be untouchable world record of 10.49 seconds.

Remarkably, when you age-grade, you find Olga is not only holding her own but in some cases getting better — which suggests that either the tables are wonky or Olga is. Most likely both are true. “She throws off the curve, because she’s doing things nobody’s ever done,” says Ken Stone, editor of Masters Track, the watering hole of the masters track community. (Motto: “Older, Slower, Lower.”) But at the same time, some recent performances speak for themselves. “I threw the hammer farther this year than I did two years ago,” she mentioned recently, offhandedly. “How do you explain that?” No two ways about it: Olga is defying, or rewriting, our understanding of the retention of human physical capability.

When people hear how old she is, they seem to look at her more deeply, at her face. To be blunt: She is not aging normally.

She thought about that. “Fifty?” She gave a half shrug. “I still have the energy I had at 50,” she said. “More. Where is it coming from? Honestly I don’t know. I wish I knew. It’s a mystery even to me.”

Excerpted from What Makes Olga Run? The Mystery of the 90-Something Track Star, and What She Can Teach Us About Living Longer, Happier Lives. Copyright © 2014 Bruce Grierson. Published by Random House Canada, a division of Random House of Canada Limited. Reproduced by arrangement with the publisher. All rights reserved.