How Eugenie Bouchard gets pumped-up before a match

We spoke to the tennis star about her pre-game ritual, which involves pasta, Taylor Swift and lots of sweating. 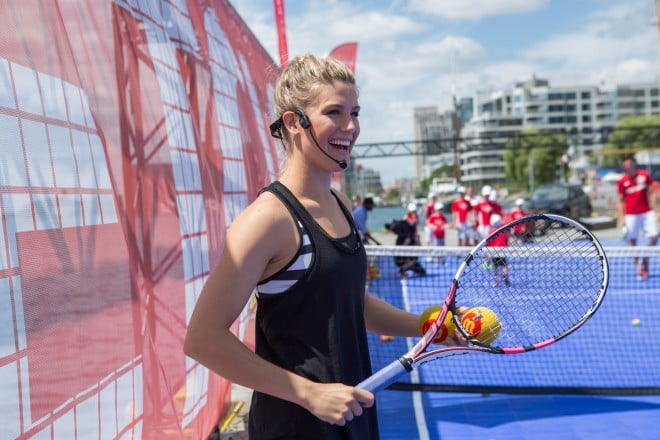 If you follow Canada’s tennis darling Eugenie Bouchard on social media then you know she’s a huge fan of Taylor Swift and Shania Twain. (She recently tweeted a photo of herself with Swift and posted an Instagram video from a Shania concert.) In Toronto for an event in advance of the Rogers Cup, Bouchard chatted with us about her go-to pump-up songs, favourite Shania tracks and pre-match routine.

What’s on your pump-up playlist?

I’m in love with Taylor Swift and her whole album [1989] — I know every word to every song. “Style” is my favourite. Besides that, it’s kind of cliché, but I really like whatever’s on the Top 40. I like the hits. I’m not going to act cool and be like, “Yeah, some random indie band is really cool.” For me, it’s whatever gets me moving and motivated. Whatever is Top 10 on iTunes is on my playlist. But I love “Genie in a Bottle” because Christina [Aguilera] sang that song for me, obviously. I also like some Kanye West. His oldies, like “Stronger,” “Love Lockdown” and “Heartless.” And I like Drake and Justin Bieber, too.

Shania is my childhood idol. I wouldn’t listen to her songs before a match but maybe after. My favourite is “From This Moment.” I sing that and I pretty much kill all living things around me — birds and humans alike just die at the sound of my voice.

What are your pre-game rituals?

It’s all about getting focused and staying in that bubble. Before a match I’ll do a 30-minute hit to get a sweat going and then I’ll shower and get in my outfit, which is hopefully very cute. It does make a difference if you feel good in your clothes — I feel better on the court and I do play better. I’ll eat a little bit of pasta and protein, like chicken, and then just relax on the couch and get ready to warm up.

What does your pre-match warm-up involve?

I do a physical warm-up about 20 minutes before a match, and I make sure I sweat, because I really want to feel warm going out onto the court. I’ll do some quick feet, run a little bit and do some stretches. I don’t want to take three games to get warm; I want to be warm when I walk on the court. During that warm-up I’d probably be listening to Taylor Swift or Kanye.