The gravity-defying cardio of a trampoline class is the best way to reach new heights at the gym. 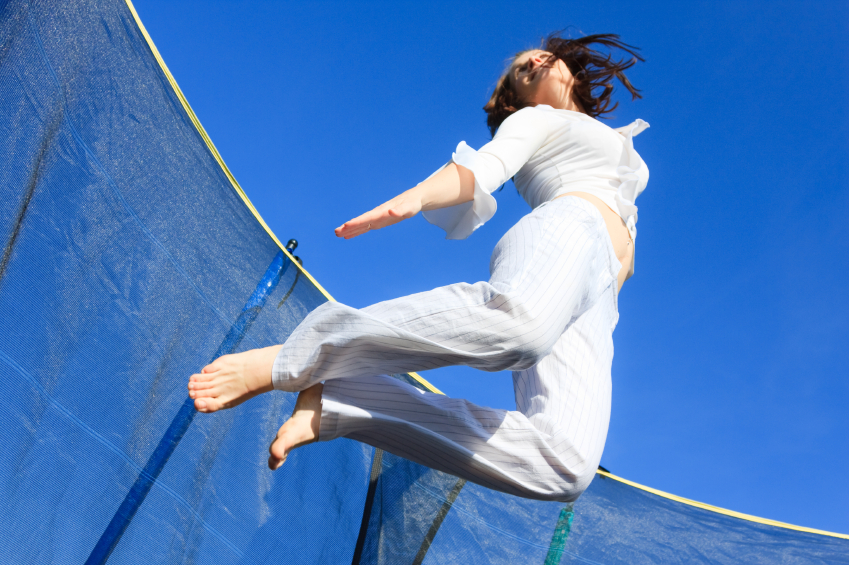 I used to think I had stamina, rhythm and coordination — until I tried trampoline aerobics. The jumping, the knee lifts, the toe taps . . . Individually I could manage them, but combining them all in a routine timed to music was a whole other ball game.

Trampoline aerobics, or rebounding, is having a moment. Maybe it’s because Rosie MacLennan’s high-flying acrobatics cinched Canada’s first (and only) gold at the 2012 Summer Olympics, or perhaps it’s that the joint-friendly sport suits all ages, burns 600 calories per hour and is ridiculously fun. Whatever the reason, specialized jump-training workouts (think aerobics, dance, yoga and even dodge ball — all on a trampoline) have skyrocketed in popularity, with classes popping up across the country.

How it all went down

In a casual New York City studio just south of SoHo, I tried JumpDance, my first-ever trampoline class. About 30 mini trampolines were staggered to face a single stage occupied by Montserrat Markou — one of the strongest, leanest 50-year-olds I’ve ever met. Markou launched her boutique gym, JumpLife, two years ago and plans to expand to Toronto, my hometown, one day soon.

Rebounding doesn’t require any special gear. Simply show up in a T-shirt and shorts or leggings and you’ll be ready to bounce. The class is, in a word, intense. Stamina is essential, but you don’t need to come equipped with any previous bouncing skill; during the class, first-timers outnumbered those who’d been there before.

For 45 minutes, Markou led us through a series of routines that ranged in intensity. High-energy club music and Swedish House Mafia blared, and strobe lights flashed.

I’m not going to lie: Keeping up was a challenge. JumpDance is quick and cardio-focused, and I often fell a step (or two) behind. A reassuring scan of the room revealed I wasn’t the only one lagging. After the first cardio interval I was thankful for the water break. From then on, my goal was simply to make it to the next one.

More bang for your fitness buck

Aside from all the fun, the physical benefits of trampoline are compelling. The data isn’t new, but it’s surprising: A NASA study from 1980 found jumping benefits the heart and lungs far more than running. That’s because bouncing improves blood flow and increases oxygenation in the body even more, says Rishi Angras, a Toronto-based osteopath. “It also stimulates the lymphatic system,” he says. Better yet, bouncing develops bone density and staves off muscle loss — all while minimizing stress on joints.

Markou was drawn to the trampoline trend because of the appeal of weightless cardio. A licensed acupuncturist and massage therapist, she wanted to give patients with back and knee pain an opportunity to exercise without aggravating injuries. She quickly saw improvement in her patients’ coordination, balance and strength. “Plus, many dropped two pant sizes because of all the cardio,” she says.

I was hooked. Back in Toronto, I joined SkyRobics, a rebounding class at a new Sky Zone gym. The workout focused on core and upper body. (I had no idea how much fun push-ups could be on a trampoline.) Trampolines are also angled up the sides of the walls — some brave bouncers gained extra leverage launching off of them. We even had scheduled playtime to try out some more-complicated gymnastics moves.

After a few classes, my pants do feel looser — and because I actually look forward to my workouts, it’s much easier to stick to an exercise schedule. Best of all, I don’t get nearly as out of breath now and I’m much more coordinated. Adding extra bounce to my routine has definitely been a winning workout strategy.

Trampoline aerobics: what is it?

Trampoline fitness classes typically include a series of routines. Timed to energetic dance music, the moves run the gamut from simple vertical or lateral hops to jacks, toe taps and running on the spot. To get a jump on the latest fitness craze, here’s where to find a trampoline gym near you.

Sky Zone in Manitoba and Ontario.

FILED UNDER: Fitness We tried it