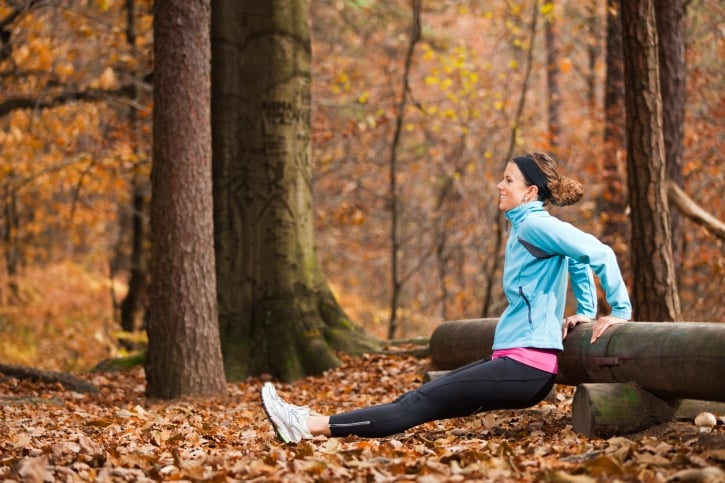 While your motives for hitting the gym may be to lose weight, its benefits don’t always have to do with fitting into smaller pants. In fact, you may be surprised to find out that exercise can affect everything from appetite to inflammation and beyond. Here are five reasons why you don’t want to skip your workout.

1. Reduced breast cancer risk
According to researchers, post-menopausal women who engage in moderate to vigorous exercise have a reduced risk of breast cancer. Almost seven years of follow up showed that women who engaged in more than seven hours per week of moderate-to-vigorous exercise for the 10 years prior were 16 percent less likely to develop breast cancer than those who were inactive. However, these benefits don’t just affect the young at heart – we can reap the rewards in our early years too. The study of nearly 65,000 women found that those who were physically active had a 23 percent lower risk of breast cancer before menopause. In particular, high levels of physical activity from ages 12 to 22 contributed most strongly to the lower breast cancer risk.

2. You’ll have less motivation to munch
While you may think that a good workout boosts your appetite, it’s often the opposite. According to recent research, 45 minutes of moderate-to-vigorous exercise in the morning actually reduces a person’s motivation for food. The study, published in Medicine & Science in Sports & Exercise, measured the food motivation of 18 normal-weight women and 17 clinically obese women over two separate days. Scientists measured the neural activity of the women while they viewed food images, both following a morning of exercise and a morning without exercise. They found their response to the food pictures decreased after the brisk workout. So not only does exercise burn more fat, it makes food less enticing afterwards.

3. Look younger and live longer
While a healthy body-fat perspective and waist-to-hip ratio is essential for a long and healthy life, recent research shows that physical fitness may trump these factors. Adults over age 60 who had higher levels of cardiovascular fitness lived longer than unfit adults, independent of their levels of body fat. Results of the study underscore the importance of physical inactivity as a risk factor for death from heart disease and stroke. However many men and women become gradually less fit with age – especially after the age of 45. To be more youthful and live longer (not to mention keep people guessing your age) I can’t stress the importance of staying on a regular exercise routine, in conjunction with healthier eating and optimal body composition.

4. More sweat equals better brainpower
You may have already noticed that a good workout can boost your brain power, not to mention your confidence. An animal study conducted by research groups at the University of Jyväskylä show that aerobic fitness promotes cognitive abilities. Another review from the Netherlands found that aerobic exercise (between 2-7 days a week) can also help boost cognitive processing speed, motor function and visual and auditory attention in older adults. According to the researchers “improvements in cognition as a result of improvements in cardiovascular fitness are being explained by improvements in cerebral blood flow, leading to increased brain metabolism which, in turn, stimulates the production of neurotransmitters and formation of new synapses.”

It’s not just for adults either — kids reap the benefits of improved performance in school when they regularly exercise.

Another recent study, from the University of Leicester, found that sitting for long periods increases your risk of diabetes, heart disease and death. And regardless of your physical activity, the more you sit, the more damage you’re doing.

The best way to counter this, if you have a desk job, is to take a few minutes every hour to get up and walk around. Or if you’re more ambitious, do a few flights of stairs in your office building.

Bottom line: Plan to hit the gym and get in a 30-minute strength circuit two to three times a week and one to two interval cardio sessions for optimal health (whether indoors or outside). Add in one yoga class or DVD and you have yourself a well-rounded fitness regimen. You can also find beginner workouts for men and women here.

Natasha Turner, N.D. is a naturopathic doctor, Chatelaine magazine columnist, and author of the bestselling books The Hormone Diet and The Supercharged Hormone Diet. Her newest release, The Carb Sensitivity Program, is available across Canada. She is also the founder of the Toronto-based Clear Medicine Wellness Boutique. For more wellness advice from Natasha Turner, click here.