Try these foods to help improve insulin sensitivity and lower your blood sugar. 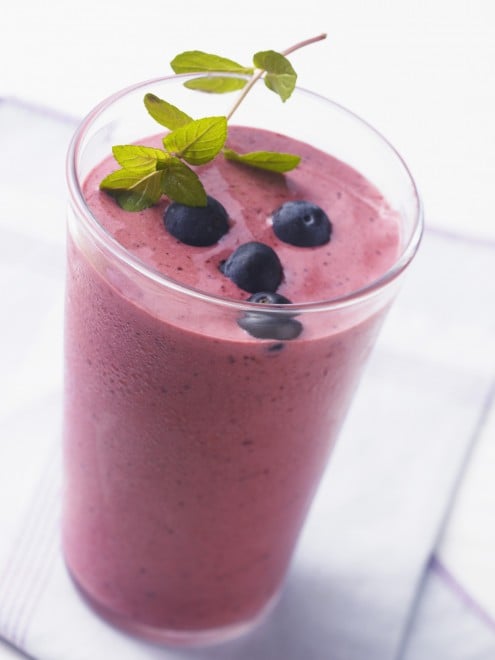 This article was originally published in August 2014 and has been updated.

If the thought of the weather getting warmer, and clothing options getting lighter or more sparse has you dreading the change in temperature, you aren’t alone. Hormones influence not only how much body fat you have, but also where you carry it. If your trouble areas are your love handles, then it’s a good bet that your insulin levels are too high. Too much insulin not only encourages your body to store unused glucose as fat, but also blocks the use of stored fat as an energy source — a double whammy for any waistline. Here are some ways that may help reduce your insulin.

1. Have a blueberry smoothie
Could eating blueberries help get rid of belly fat? According to a study published in the Journal of Nutrition, a daily dose of the bioactive ingredients from blueberries also increases sensitivity to insulin and may reduce the risk of developing diabetes in at-risk individuals. Researchers discovered that obese, non-diabetic and insulin-resistant participants who consumed a blueberry smoothie daily for six weeks experienced a 22 percent change in insulin sensitivity, compared to only 4.9 percent in the placebo group.

2. Take vitamin D
The sunshine vitamin can help you get a better midriff, not to mention boost your hormones. A study published in the British Journal of Nutrition showed women who were given a daily dose of 4,000 IU of vitamin D3 showed improvements in their insulin resistance after six months of supplementation. You may wish to have your blood level of vitamin D3 tested by your doctor at some point; the Vitamin D Council recommends maintaining blood serum levels of 125nmol/L and the participants whose vitamin D levels were between 80 and 119nmol/L had the biggest improvements in insulin resistance.

3. Add cinnamon to your smoothies
A research group from the Beltsville Human Nutrition Research Center found that cinnamon reduced blood sugar, total cholesterol and LDL cholesterol in subjects with type-2 diabetes after just 40 days of consuming one to six grams of cinnamon per day.

4. Add pistachios to your diet
A prospective cohort study of women found that the frequency of nut consumption had a substantial and highly significant inverse association with risk of type-2 diabetes. The reduction in risk of developing type-2 diabetes was 30 percent lower in those consuming nuts five or more times per week and 20 percent lower in those consuming nuts one to four times a week compared to those that almost never ate nuts. A study published in the journal Diabetes Care also found that consumption of pistachios significantly decreased insulin resistance over four months and may guard against type-2 diabetes. Other studies have shown similar results for many types of nuts and peanut butter. I recommend having nuts (almonds, walnuts, hazelnuts — simply vary it) as a fat source once daily.

5. Take zinc supplements
Zinc is required for the activity of more than 300 enzymes in the body — it is also one of the most common mineral deficiencies I find in clinical practice. In fact, according to a study published in American Physiological Society, rats who were fed a zinc deficient diet demonstrated a peripheral resistance to insulin within just five weeks of feeding!

6. Get active
Three days of being a couch potato will not only drop your mood and make you feel lethargic; it will have a dramatic effect on insulin sensitivity. A small study with 12 participants took participants between 20 and 35 years old that averaged 12,956 steps a day and reduced their activity to 4,319 steps a day (as measured by a pedometer and confirmed with an accelerometer). This simple change resulted in a 30 percent drop in insulin sensitivity and reduced glucose response after meals. Other studies have shown that just one session of high-intensity exercise can improve insulin sensitivity in healthy adults and those with type-2 diabetes.

7. Snack on tart cherries
Researchers have found that tart cherries have significant health benefits in animal models, including reduced belly fat. In the study, rats that consumed tart cherry powder in their diet for eight weeks showed improved glucose tolerance and insulin signalling. As an added bonus, these berries are high in melatonin and can improve your slumber. Add to your smoothies or enjoy a snack with ½ cup Greek yogurt, ¼ cup tart cherries and a tbsp of nuts mixed together.

Get moving with this quick, high energy workout