Canada is a nation of frequent, mindless and increasingly obese snackers. Here's why Canadians need a new guide now — one that focuses on much more than serving sizes. 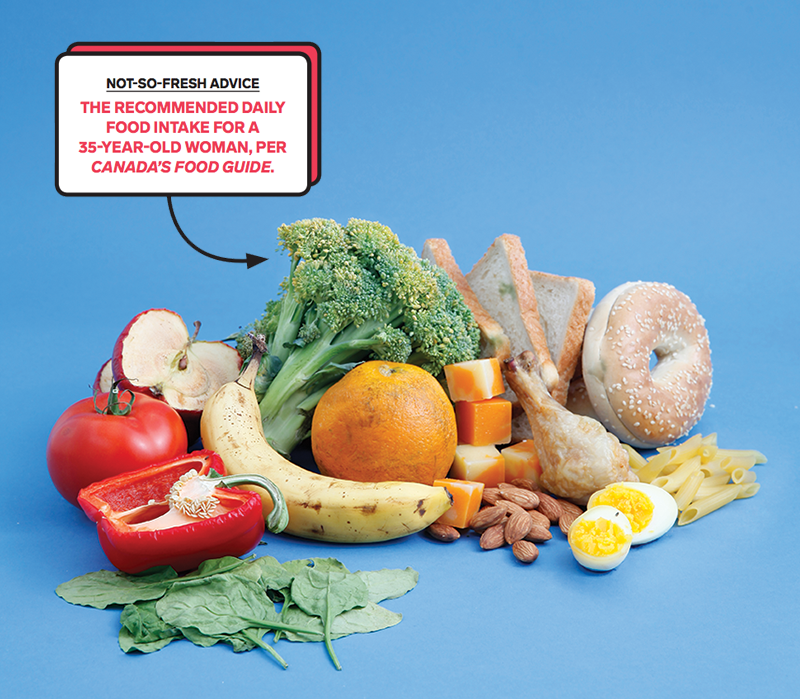 Update: On October 24, 2016, Health Minister Jane Philpott announced that the federal government plans to overhaul Canada’s existing healthy eating guidelines, and that, while the science of the original guide is sound, “the classic one-size-fits all guide no longer meets the needs of Canadians.” (A release date for the new version has not yet been determined.) In addition, a new, more rigorous food labeling system will highlight whether a food product is high or low in specific nutrients, like sugar, sodium and saturated fats. The government will also restrict food marketing to children under 13, which follows recommendations from the World Health Organization released in 2010.

While Canada’s Food Guide remains a colourful fixture in primary school classrooms and dietitians’ offices across the country — its rainbow beams dotted with simple, recognizable snacks, like peanut butter, cheese cubes and vegetables — many nutritional experts have recently likened it to a conservative grandparent: well-meaning, but out of touch.

It’s criticized for its ambiguous serving sizes and for failing to keep up with our understanding of how food affects health (the current version still takes a hard line stance on saturated fats, for instance, and dedicates precious little space to trans fats). But it is also being outpaced by changes in the way we eat — a blind spot, some dietitians say, that is hindering our national health.

In the nine years since the guide’s last revision, the pace of adult Canadians’ lives has accelerated dramatically. Two-thirds of Canadian workers average more than 40 hours of work per week, there are now nearly as many active cellphones as there are citizens, and meal preparation, like time, has become a luxury. Many of us choose the path of least resistance to a full stomach — say, by inhaling a highly processed, pre-made burrito in traffic — instead of cooking three square meals that fulfill our federally sanctioned daily intake.

Meanwhile, according to Statistics Canada, nearly two-thirds of us now qualify as overweight or obese, a twofold increase since 1980. Over the same period, incidences of chronic weight-related ailments — like type 2 diabetes, heart disease and certain cancers — also mushroomed. Between 48,000 and 66,000 Canadians die of conditions linked to excess weight each year.

There are, of course, multiple forces contributing to our ballooning waistlines, but many experts agree the food guide, as it stands, isn’t a strong enough foundation on which to base our national philosophy of eating. Still, it’s referenced with stunning regularity: In 2015, the guide was downloaded more than 250,000 times, making it the second most downloaded government document, after tax forms. The feds still believe in its potential to influence the health of Canadians too: At press time, federal health minister Jane Philpott was overseeing a review of the guide to decide if another full-scale makeover is necessary. For a new iteration to be effective, however, experts say it needs to focus not only on what Canadians are eating  but also on where, when, how and why.

Dietary guidelines the world over tend to fall in line with cultural norms: Greece’s guide suggests that olive oil be consumed once a day, while potatoes form the bedrock of the Irish food pyramid. Canada’s Official Food Rules, the first version of the food guide, released in 1942, was influenced by strict wartime rations and took a “health-protective” stance to keep Canadians in fighting form. In the freewheeling ’60s, the government softened the language from “rules” to “guide” and factored in more dietary flexibility (and psychedelic colours). Health Canada pivoted again in 1982 with the release of the landmark Report of the Committee on Diet and Cardiovascular Disease. Its priority was no longer staving off nutritional deficiencies but preventing chronic diseases, like obesity and diabetes, by recommending limits on salt, alcohol and saturated fat, the dietary villain of yesteryear.

Subsequent revisions, like the 1992 guide (which marked the first appearance of our beloved rainbow), showed a preoccupation with food groups, the largest of which was grains. In 2007, a $1.5-million update gave fruits and veggies top billing, broke down servings by age and gender for the first time, and included an interactive web version and a separate guide for Canada’s indigenous populations to account for the culinary diversity in our national diet. But to some, the edits and add-ons haven’t gone nearly far enough.

In March of this year, the Standing Senate Committee on Social Affairs, Science and Technology released a 48-page report that examines the causes of the country’s skyrocketing obesity rate. The results are bleak. According to the committee, Canadians live, work and graze in an “obesogenic environment,” one that “makes it too easy to eat poorly and remain sedentary.” Predictably, it points a finger at the proliferation of fast food outlets and smartphones, but one of its most damning indictments is left for the food guide, which it calls “at best, ineffective,” and at worst, “enabling.”

Mary L’Abbé, chair of the Department of Nutritional Sciences at the University of Toronto and director of the World Health Organization Collaborating Centre for Nutrition Policy for Chronic Disease Prevention, says that the guide was “probably state of the art about 10 years ago,” but the science has since moved on. The food guide disproportionately vilifies saturated fats, whose link to cardiovascular problems has been overestimated, we now know; it emphasizes nutrients rather than fresh, whole foods; and it gives a pass to modern-diet kryptonite like sugary fruit juice — or, as the Senate committee calls it, “a soft drink without the bubbles.” Warnings about trans fats and highly processed “other” foods, which now make up a staggering 30 percent of our caloric intake, read like an afterthought on the guide’s back page.

“Our biggest problem now is an excess of inappropriate choices, calories we don’t need,” says L’Abbé. To her, the most egregious misstep of most westernized food guides is their failure to consider poor eating behaviours and how they’re perpetuated in the broader context of our grab-and-go world.

If the existence of UberEats, pre-peeled oranges and ramen bowls with built-in iPhone docks reveals one thing about North Americans, it’s our appetite for efficiency — even at the expense of our health. Gillian Crowther, a professor of anthropology at Capilano University in North Vancouver, B.C., and the author of Eating Culture: An Anthropological Guide to Food, says our desire for stress-free, quick-and-dirty meals has sped past Health Canada’s ability to modernize its literature. “The food guide reduces food to quantities of chemicals, whereas people just think, ‘Oh, that looks tasty!’ ” she says. “If we’re supposed to be busy all the time, and we’ve somehow got to fit in eating, we don’t need [a tool] that adds to our anxiety. We need advice that’s simple but fits our lifestyles.”

To get a sense of just how complicated eating has become, Ipsos surveyed 20,000 Canadians from April 2015 through March 2016, making sure to track behavioural factors — not just what we ate, but where we bought it, why we chose it and what we were doing while we chowed down. According to Ipsos vice president Kathy Perrotta, convenience is paramount: 66 percent of eating occasions noted in the survey weren’t traditional sit-down meals, like breakfast, lunch or dinner, but rather snacks. The average prep time for dinner — a quarter of which took place after 7 p.m. — was 25 minutes or less. Nearly half of all meals were consumed alone, and respondents engaged in “distracted dining” (i.e.: while texting or watching TV) a third of the time — a trend that a 2013 study in the American Journal of Clinical Nutrition linked to accidental overconsumption.

Millennials, Perrotta says, are the true torchbearers of our modern “what I want, when I want” philosophy of eating. They also have serious trust issues with Big Food: In May, a study released by the Canadian Centre for Food Integrity revealed that Gen Y is significantly less invested than other cohorts in advice from once-revered food authorities: farmers, food companies and, most important, government agencies. “You’re not going to have a food guide that will fit everyone — society is now too diverse, and tastes are too personal,” says Crowther. “But there are fundamental things we all do that [eating] plays a part in, like social relationships. If a government could tap into that sense of how we construct our identities through food, how it features in our lives, it’s going to get at something.”

Brazil, a country with a population nearly six times that of Canada, has managed to implement what many nutrition experts consider to be the platonic ideal of dietary guidelines. In 2014, it led most European countries on the OECD’s obesity index; later that year, the Sistema Único de Saúde, Brazil’s national health authority, rolled out a revamped food guide anchored by one “golden rule”: Always choose natural and minimally processed foods over ultra-processed ones.

It’s not exactly a radical notion, but it stands out by virtue of acknowledging how people actually eat. “It wasn’t about [holding up] specific foods, but creating general recommendations to broaden the autonomy of the Brazilian people,” says Jean-Claude Moubarac, an assistant professor of nutrition at the Université de Montréal who consulted on the Brazilian guidelines. “You want to give [advice] on how to choose and prepare food, and then let people express their creativity — you have to let culture work.” Brazil’s guide also instructs readers on how to shop, emphasizes the upside of traditional, locally grown foods and calls out common barriers to healthy eating and the insidious power of junk food advertising. It even goes so far as to explicitly encourage cooking and eating slowly and mindfully in the company of others — not alone in your car while on Instagram — which, these days, is universally applicable advice.

Brazil isn’t the only country testing more holistic approaches to national nutrition: In December 2015, Chile’s health ministry launched El Plato de Tu Vida, a campaign that promotes cooking with kids as a way to combat childhood obesity. Qatar, Germany and Sweden have factored the environment into their guidelines, nudging their citizens toward more sustainable foods. (Sweden even went so far as to suggest limiting one’s meat intake, as beef production is a massive source of greenhouse gases.)

On the home front, there are glimmers of hope that a revamped food guide can help Canadians rehabilitate their eating behaviours: In late June, Moubarac was invited to present his Brazilian research before Health Canada’s nutrition bureau. The discussions were preliminary, but he says his audience “seemed very receptive.” Another less intuitive source of healthy-eating optimism, says Crowther, is social media. If our feeds are constantly inundated with all manner of eye-grabbing food porn, she suggests, it’s a good-enough sign that, even in 2016, we still hold a candle for a lovingly cooked meal. “Instagram frames eating as a social, shareable act — as part of how we belong in places — which is what all the world’s cuisines are about,” says Crowther. “We are who we are because of what we eat.”

More:
20 Canadian women to watch at the Rio Olympics
Canada’s MMIW will be the focus of a doc backed by Zoe Saldana
The ultimate carry-on tote and 8 must-have travel accessories

Video: How to make cauliflower hummus