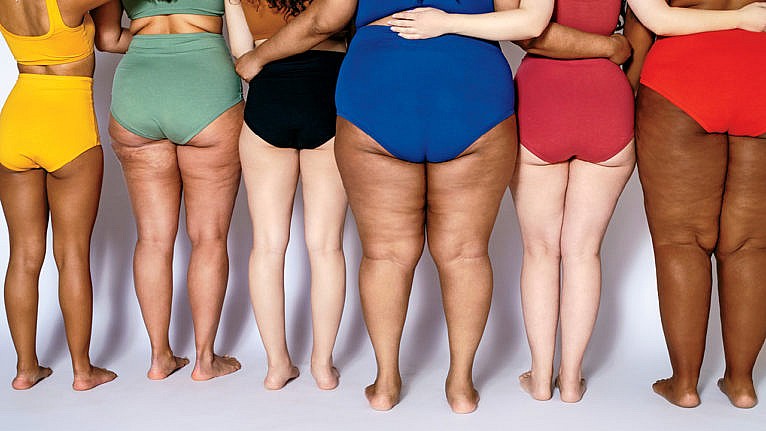 When I was nine, I’d gingerly step my size-four feet onto a scale. I’d hold my breath and stand as lightly on my toes as possible. Perhaps if I held my body a certain way, the number would be kind to me. I already felt in some deep, hurt place that what the scale told me was important, and when the dial twitched up to a “bad” number, I concluded I must be bad, too.

That number on the scale doesn’t have the power over me it once did. I know I don’t need to exercise, starve and punish my body for a standard that some bodies—like mine—were never meant to fit.

But the rest of the world still has a lot of catching up to do. Obesity wasn’t considered an illness by the American Medical Association until 2013, and even this change hasn’t shifted public perception that it stems from bad choices rather than something systemic. Food insecurity, poverty and lack of access to health care are just a few examples of the social determinants of obesity. Meanwhile, 54 percent of Canadians with obesity report being stigmatized by co-workers, and kids in elementary school with obesity have a 63 percent higher chance of being bullied than their slender counterparts. Fatphobia has even influenced our pandemic anxieties, with fear of gaining weight under lockdown dominating social media even as COVID-19 claims lives.

Last summer, Obesity Canada and the Canadian Association of Bariatric Physicians and Surgeons released updated guidelines for treating obesity, which is characterized by the World Health Organization as “abnormal or excess fat accumulation that presents a risk to health.”

The goal? To move treatment of obesity away from weight loss and focus on the societal and often systemic determinants of weight and health. And, importantly, to treat fat patients with compassion instead of judgment—in other words, to treat them like people. The updated guidelines aim to dispel harmful beliefs that body size and weight directly determine health, notions that have informed the societal perception of fat people as lazy and unwell. The changes are long overdue.

Growing up, doctors only ever suggested I lose weight—they’d show me charts that indicated I was above the “normal” range for my age and height—yet always said I was otherwise healthy by whatever standard they used at the time.

Poor relationships between fat patients and health-care providers isn’t uncommon. A 2009 New York University School of Medicine survey of 399 physicians across a spectrum of specialties found that more than 40 percent had a negative reaction when it came to treating larger-bodied patients. A 2013 survey from Johns Hopkins University showed physicians were less likely to build a positive rapport with patients who have obesity. And a 2015 survey in the journal Patient Education and Counselling examined more than 600 people who met the clinical definition of obesity and found that 21 percent of patients who felt judged for their weight had lower trust in their care providers.

When Rachelle Sabourin, 28, moved to Toronto a decade ago, she was “very fortunate,” she says, to find a family doctor who sees her as more than just a number on the scale. “When I was thin, around 175 pounds, I was the most unhealthy I’ve ever been. I was a binge-drinking, drug-abusing, junk food worshipper,” she says. “Now I’m 230 pounds, I exercise regularly and I eat healthier than ever before.”

Last August, Sabourin had her kidneys, liver, bladder and ovaries checked out due to lower-abdominal pain. “The technician immediately made comments about my size, claiming it made her job more difficult. She asked me three times how many kids I have, despite my answering that I’d never been pregnant,” she says. Having had her ovaries looked at before, Sabourin knew the appointment would require a transvaginal ultrasound; uncomfortable, but less intense than a Pap test. She was thrown by how awful the procedure was.

“[The technician] was very aggressively moving my limbs around, clearly frustrated, and yet never communicated what she needed me to do,” says Sabourin. “The experience was so painful I began to cry.” Despite her vocal distress, the technician continued, making Sabourin worry that something was really wrong. Later, her doctor confirmed that the technician’s conduct was unprofessional. But the experience has made Sabourin apprehensive about future appointments.

“Larger-bodied individuals do face discrimination, and the medical field is not an exception,” says Dr. Brent Crawford, a physician at Magenta Health. The Toronto network of clinics is touted by word of mouth in the city’s fat-activism circles as one of the best places for people with obesity to seek health care.

“Every patient is different and comes from a complex background of factors: physical, mental, socio-economic status, cultural background,” he says. “Weight means different things to different people, and it’s important to be cognizant of that.”

Tanecia Rodriguez, 33, has always had positive experiences with her doctor. That’s why she and her family travel from Oshawa, Ont., to Toronto to see him.

These days, she sees bias through her children’s eyes as well as her own. Concerned about her daughter’s weight, family members encouraged Rodriguez to approach her family doctor. While he confirmed that Rodriguez’s daughter was medically overweight, “he also informed us she has always been in the 97th percentile for weight and height, since she was an infant,” she says. “He reiterated that every body is different and—while we should continue to monitor what our kids are eating and how much movement they are getting, due to family history—he commended us on what we were doing right.”

I was a chronic dieter for over a decade, but none of the weight I ever lost stayed off. I’ve seen this happen to multiple people close to me. Audiences watched it happen on the extreme weight-loss competition show The Biggest Loser: After taping, contestants almost always gained the weight back.

Researchers are looking beyond the dieter’s perceived discipline to examine the role dieting itself plays in weight gain after weight loss. Psychologist Traci Mann spent 20 years running an eating lab at the University of Minnesota. Restricting calories, she notes in her 2015 book, Secrets from the Eating Lab, triggers a stress response that causes weight gain. “Most of us have a genetically set weight range,” she told NPR in 2015. “When we try to live above or below that average, our body struggles mightily to adapt.”

So, if we know that permanent, long-term weight loss is nearly impossible, why does it keep getting prescribed? The body mass index (BMI) might have something to do with it. Developed in the mid-1800s by Belgian mathematician Adolphe Quetelet, the formula of dividing a person’s weight in kilograms by their height in metres squared was meant for studying populations, not individuals. Despite this, it’s been used for more than two centuries to sort people into categories that often don’t accurately reflect their states of health.

The scale doesn’t consider muscle-to-fat ratio, waist circumference, cardiovascular health, diet and more—meaning an Olympic weightlifter can easily fall into the overweight category. Studies have also concluded that BMI isn’t a good indicator for risk of heart attack, stroke or death. Magenta Health’s Crawford acknowledges that weight and health can be linked—for example, when it comes to heart disease and fatty liver disease—but the two are often conflated.

Dr. David Lau, co-chair of the committee responsible for the new Canadian guidelines, says a comprehensive history and physical examination, along with appropriate lab testing, gives health-care providers a fuller picture of a patient’s health. Annual checkups usually begin with stepping on a scale and having the numbers documented by a nurse. The new guidelines suggest asking a patient’s permission before measuring body weight, height, BMI and waist circumference to reinforce non-judgment.

“We shouldn’t assume every person with a larger body has obesity; hence, we ask for permission,” says Lau. “Does the person feel their weight is affecting their medical, functional or psychosocial health?”

These measurements, he says, are useful for determining if a patient has central obesity, or excessive fat accumulation around the stomach, which can be associated with medical complications such as type 2 diabetes or non-alcoholic fatty liver disease. The guidelines put power into the hands of patients, enabling them to have autonomy over their health care.

More than just their bodies

So what would a shift away from a BMI-and-weight-loss-focused approach to care look like? Ask Dr. Valerie Taylor, a psychiatrist who has been researching the link between obesity and self-esteem for years at Women’s College Hospital, the University of Toronto and the University of Calgary.

“Shame is rarely an effective tool, and often just worsens self-esteem and makes clients less likely to talk about their concerns,” she says. Taylor looks beyond the scale. She brings mental health, beneficial behaviours, eating habits and more into question. Sometimes the changes she and her patients make together result in weight loss—but that isn’t the ultimate goal. Health plans are individual and built through doctor-patient collaboration.

She stresses that health-care professionals aren’t immune to societal opinions about fatness, either. “There’s a lot of bad messaging publicly, and health-care providers pick up on that just like others,” says Taylor. Hopefully now, people will be viewed by more than just their bodies.