What Is Canada Doing To Hold The COVID Variants At Bay?

Case counts are falling, and provinces have begun opening up. But experts warn that more contagious strains could soon lead to another huge spike. 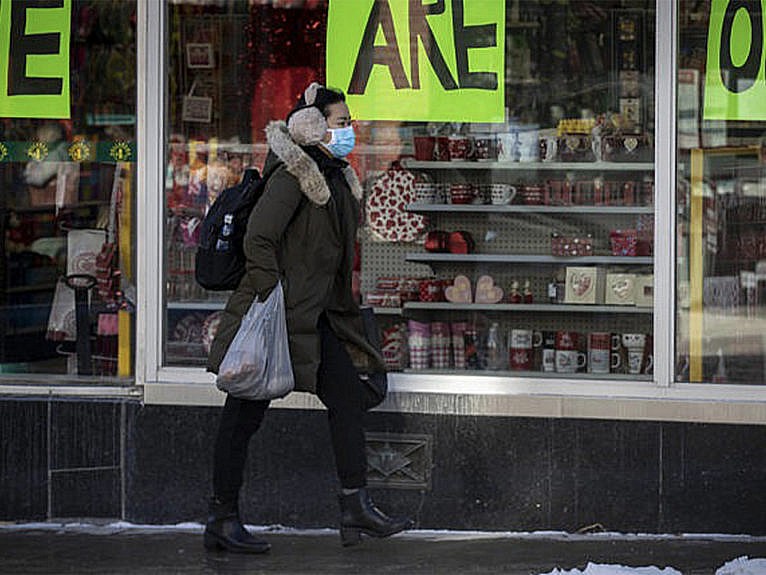 A person wears a mask to protect them from the COVID-19 virus while walking by an open store in Kingston, Ontario, on Wednesday Feb. 10, 2021. Kingston, Frontenac and Lennox &amp; Addington (KFL&amp;A) Public Health unit has moved into the green zone. (Photo: THE CANADIAN PRESS/Lars Hagberg)

During this pandemic, public health officials and experts have developed reputations for being very deliberate in language, in an effort to not spark panic. But in recent days and weeks, they have been sounding increasingly loud sirens, warning about the dangers posed by new variants of SARS-CoV-2.

On Feb. 8, Dr. Eileen de Villa, Toronto’s medical officer of health, stated that while there is still great uncertainty about how much of the variants are in Canada, “what we know is alarming.” In particular, she said baldly, “We are in transition to a new pandemic,” one dominated by those variants, which now include B.1.1.7, first detected in Britain, B.1.351 from South Africa and P.1 from Brazil. While the coronavirus has regularly mutated during this pandemic, what sets these “variants of concern” (VOCs) apart is the ease with which they spread. The most prevalent variant in Canada, B.1.1.7, is 30 to 50 per cent more transmissible than existing strains.

“Over the past week, the total number of new virus variant detections has more than doubled,” said Dr. Theresa Tam, Canada’s chief medical officer of health, in her daily statement on Feb. 9. (The number of these cases in Canada was almost 400 as of Feb. 9, according to CTV News, which is tracking cases.) While presenting new modelling on Jan. 28, Dr. Adalsteinn Brown, head of Ontario’s Science Table, predicted that the B.1.1.7 variant “will likely be the dominant version of the virus in March.” (The Centers for Disease Control also believes that B.1.1.7, which is doubling every 10 days in the U.S., will be the dominant strain in the United States by March.)

In some ways, this moment feels like where we were in mid-March, when medical experts advised governments to essentially shut down society, even though the number of cases of COVID-19 had only topped 100 on March 11. They could see what was happening in virus-ravaged Europe and knew it was only a matter of time until Canada was hit. Now, they are again warning of a potential danger that could be on a similar scale.

Israel, which is rapidly vaccinating its population, is in its third lockdown, brought about by a massive surge in cases, of which around 80 per cent are B.1.1.7. Like Israel and the rest of the world, Canada is in a race between variant and vaccine, the latter of which appears to forestall most hospitalizations and deaths due to COVID-19. Vaccines appear to be winning the battle in Israel, where cases and hospital admissions are falling more steeply in seniors, who are by and large vaccinated, versus younger groups, who aren’t.

To hold the variants at bay in Canada, a variety of measures have been introduced. The federal government now demands PCR tests for everyone but non-essential workers who enter the country by land and air; Manitoba requires virtually everyone entering the province to self-isolate for 14 days; New Brunswick demands rotational workers to self-isolate for two weeks upon their return to the province for their time off; and in Alberta, everyone in the same household as a person who stays home during their isolation after testing positive for a VOC, now has to quarantine until “14 days have passed from the end of the case’s isolation period, or a total of 24 days,” explained Dr. Deena Hinshaw, the province’s chief medical officer of health, on Feb. 2.

“I think some of the limiting movements and creating barriers to people coming in [to Canada] when they are infected…are good steps,” says Dr. Ilan Schwartz, an infectious diseases physician in Edmonton and assistant professor at the University of Alberta. Still, he’s not a fan of his province’s 24-day isolation rule, which he calls “more theatrics than anything,” as “the specific circumstance where somebody is living with somebody who is known to be infected with a variant” will likely only apply to a small group of people.

In particular, Schwartz isn’t sure any specific measures aimed at stopping the uncontrolled spread of VOCs “are going to ultimately have enough of an impact if we are, at the same time, lifting restrictions designed to minimize transmission of the virus here in the province.” He acknowledges “this is not purely a scientific or medical decision” and that “there are a lot of societal factors and political factors at play as well.”[contextly_auto_sidebar]

Some provincial governments, including those in Ontario, Quebec and Alberta, are reacting to falling case counts by relaxing public health restrictions, upping the number of people who can gather together socially and restarting dine-in eating. On Monday, after Alberta allowed restaurants to reopen, the number of Open Table reservations spiked.

British Columbia isn’t following the paths of the other big provinces. On Feb. 5, Dr. Bonnie Henry, B.C.’s provincial health officer, said restrictions wouldn’t be lifted, citing her concern for the VOCs: “We are in a place of a little bit of uncertainty. We need to buy some time to understand if the positive things we are seeing will allow us to take away some of the restrictions we have in place now, and be able to do that safely,” even warning that restrictions may increase if variant case counts increase.

Sticking to the existing playbook of public health measures, such as limited gathering sizes, is the course Schwartz favours: “With cases going in the right direction, if we bide our time, continue with the restrictions that have been very effective so far, then we can expect that the case numbers would go down substantially and there wouldn’t be opportunity for these variants to emerge [as bigger threats.]”