Breasts can be a mystery — even to those who have them. 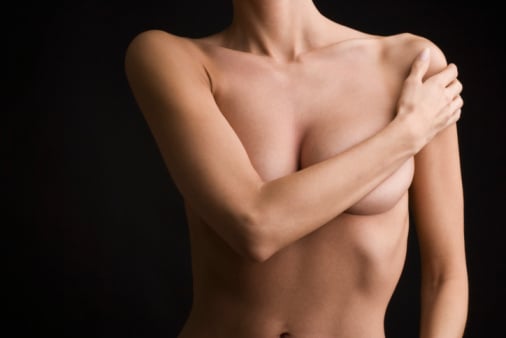 1. Breasts, and their production of milk for offspring, define all mammals, but we humans are the only primates whose boobs get bigger at puberty and stay that way.

2. The breast is basically a modified sweat gland made up of fatty, glandular, and fibrous tissue. A handful of 15-20 glands sit underneath the nipple ready to produce milk. One breast alone can produce 450 ml of milk a day during lactation. That means a pair of breasts can produce just shy of a litre of milk each day.

3. Women’s breasts seesaw in size over their cycle with the ebb and flow of hormones like progesterone.

4. Turns out millions of women can be wrong — at least when it comes to their bras. A survey published by lingerie company Triumph International found 76 percent of women in the world are wearing the wrong size.  The most common sin? Overestimating band size while underestimating cup size. No wonder bras cause back, shoulder or neck pain in three out of five American women.

5. Boobs are swelling the world over, thanks to rising obesity and the number of women taking birth-control pills. According to lingerie retailer Intimacy, the average American bra size has jumped from a 34B 20 years ago to a 34DD in 2013.

6. A pair of D-cup breasts can weigh between 15 and 23 pounds, the equivalent of carrying around a six-month old baby boy.

7. Reason number one to invest in a good sports bra: small breasts can move up and down more than three inches when you jog, and large ones can bounce out of their bras entirely.

8. Extra-large breasts aren’t just a burden — without a supportive bra, they may be a health hazard. Thin straps can dig into the nerves that run down your arm, causing numbness in the little finger.

9. Sex researcher Alfred Kinsey estimated that breasts and nipples are erotically sensitive in half of all women. A 2011 study  published in the Journal of Sexual Medicine found that nipple stimulation ‘lit up’ the brain similar to the way genital stimulation does. The nipple expands during sexual arousal — it sticks out by up to 1 cm and widens a bit, too — only to rapidly deflate after orgasm into crinkled skin.

10. Most women’s nipples are outies, while only 10 to 20 out of every 100 nipples are innies, or inverted nipples.

11. One study of men in the United States revealed they found breasts “the most sexually stimulating” characteristic of a women’s body. While a 2013 study found that men from lower socioeconomic status rated larger breasts more attractive than men from higher socioeconomic status. But according to one survey by lingerie company Bluebella, women and men have different views on the ‘perfect’ female body — women preferred fit, toned bodies while men preferred curves.

12. Over the past 50 years, Playboy centerfolds have changed with the economy. In tough economic times, heavier and taller Playboy Playmates were preferred. As the economy improved, lighter and shorter models were featured.

13. Breast augmentation is the most popular cosmetic surgery for women in the U.S.

14. Ignore all those scary emails – researchers at the U.S. National Cancer Institute found no correlation between antiperspirant and breast cancer. And bras don’t cause cancer either.